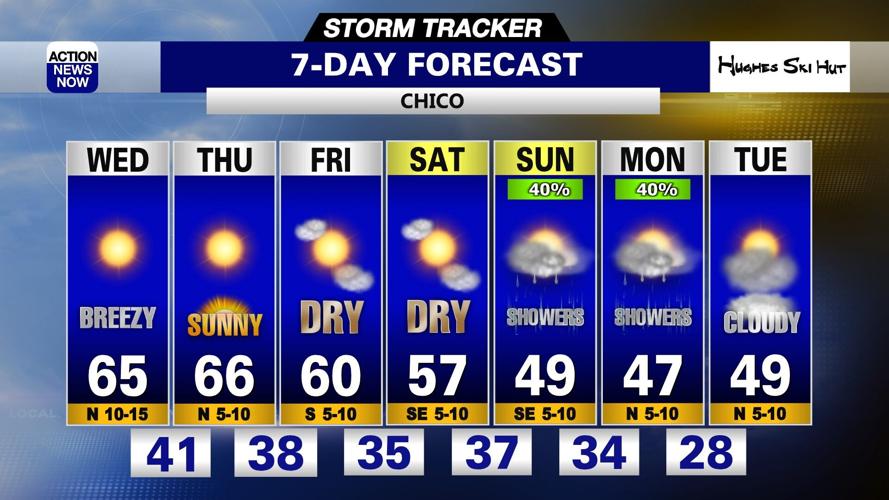 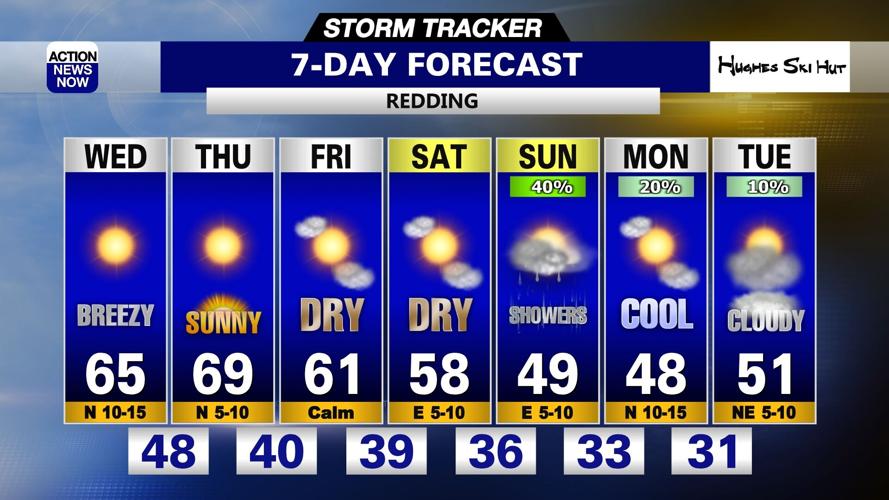 Throw on a windbreaker and grab your sunglasses before you head out the door Wednesday. We'll have plenty of sunshine, mostly milder low temperatures, similar to slightly warmer high temperatures and breezy north winds across our region through the day. High pressure off the coast in the Pacific will keep the storm track well to our north over the next several days, and is driving our sunshine and above average temperatures through the end of this week. Low pressure dropping south into the Great Basin is what's driving our breezy north winds through early to mid day Thursday. The north downslope winds have kept the same portions of the northern end of the valley and along I-5 a bit warmer than the east side of the valley again overnight into early Wednesday. Temperatures are ranging from the 30's to low 40's in the mid valley in Butte County to 40's to 50's along I-5 to start the day in our lower elevations. Foothill areas are starting out in the 30's to 40's and our mountain areas are mostly ranging from the single digits to 20's early today. We'll have sustained winds out of the north or northeast in the 10 to 20mph range, and gusts in the 30 to 35mph range possible through the day. High temperatures are projected to climb into the mid 60's to lower 70's in the valley, upper 40's to lower 60's in the foothills, upper 30's to upper 40's in the Sierra, and 50's in most Northern Mountain areas. Winds will begin to diminish this evening, but will stay breezy enough to leave us will similar to slightly cooler low temperatures in wind impacted areas tonight.

We'll have very similar conditions to Wednesday on Thursday, but winds will be a little weaker across northern California. We'll also have a few thin clouds just brushing across our region through the day. High pressure off the coast in the Pacific will be the main driver in keeping our weather pattern the so similar on Thursday, but that ridge will begin the break down on Friday. The weakening ridge will start to open the door for more influence from cooler systems tracking through the Pacific Northwest starting Friday and that impact will become more substantial through this weekend. Conditions will be slightly cooler for most areas early Friday due to the lack of clouds to trap in the heat from Thursday afternoon and the lighter winds out of the north overnight. Valley and foothill areas will mostly range from the 30's to lower 40's, and our mountain zones will mostly range from the single digits to 20's to start your Friday. Frost could become more of a widespread issue early Friday morning. We'll have mostly sunny skies over our region through your Friday and high temperatures will drop by several degrees compared to Thursday. Valley areas will mostly top out in the lower 60's. Foothill and mountain areas will end up in the 40's to mid 50's.

Storm Tracker Forecast: Hot with the threat of thunderstorms Monday