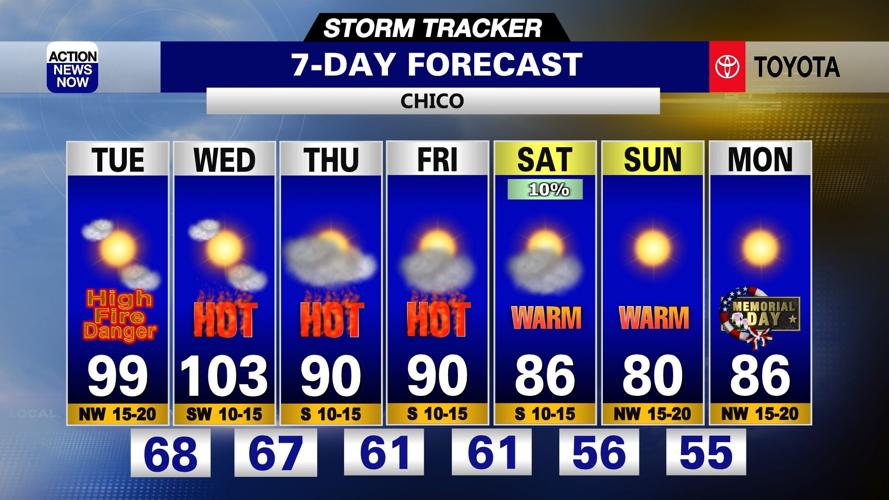 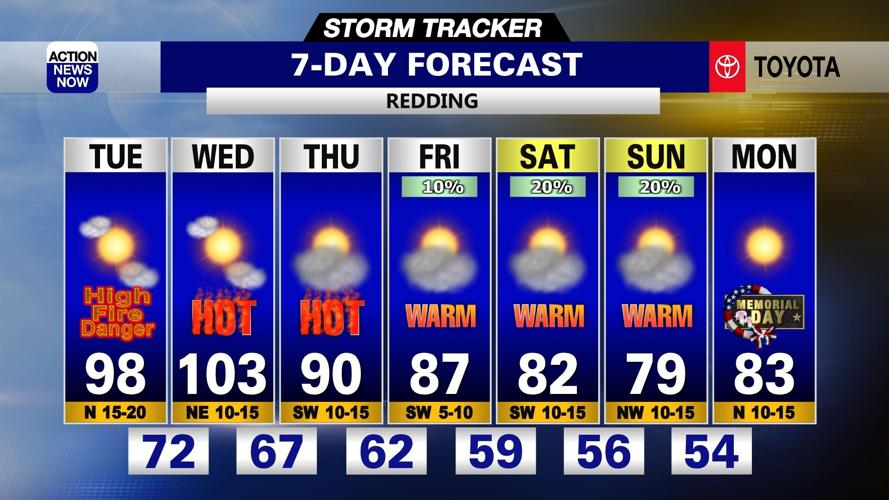 Throw on some light layers, grab your sunglasses, and get some extra water handy as you're getting ready to head out the door Tuesday morning. You'll also want to make sure you're very cautious today as fire danger remains high across northern California. A Red Flag Warning for high fire danger remains in effect in the valley and foothills through 11am Wednesday due to breezy to gusty north winds, low humidity, and our dry fuels. It's important to avoid any activities that could spark a fire, like mowing your lawn or parking over dry brush today. A Heat Advisory is set to go into effect in the valley and lower foothills at noon Tuesday, and is set to last through 11pm Wednesday night. We have clear skies and warm temperatures across northern California for the start of your Tuesday. Temperatures are in the 60's to 70's in the valley, 50's to 60's in the foothills, and 30's to lower 50's in our mountain zones to start the day. Winds are out of the north to around 15mph this morning, and will increase to be up to around 20mph through the day. Gusts in the 30 to 35mph range will be possible, and when you pair those winds with our rapidly dropping humidity and dry fuels, that's a recipe for high fire danger. High temperatures are on the rise today, and will continue to get even hotter on Wednesday. Valley areas are projected to range from around 97 to 102 degrees, while foothill areas top out in the lower 80's to lower 90's, and mountain areas climb into the upper 70's to upper 80's Tuesday afternoon. These high temperatures are projected to be some of the hottest we've had so far this year, and will get close to breaking records in portions of our region this afternoon. Heat related illness is a big concern, so it's important to limit your outdoor activity in the afternoon and make sure you're staying hydrated.

High pressure will be centered over the southwest on Wednesday, and that will prompt our hottest temperatures of this week and year to arrive on Wednesday afternoon. The ridge building in will help push the low pressure driving our stronger winds further east, and our winds will diminish after Wednesday morning. This will result in fire danger decreasing, but the heat will be a big concern. Temperatures will start out in the 60's to lower 70's in the valley, 50's to 60's in the foothills, and 30's to 50's in our mountain zones Wednesday morning. Winds will be out of the north in the morning, but will shift to become out of the south to around 15mph in the afternoon. We'll have sunny to mostly sunny skies overhead, and our high temperatures will end up several degrees hotter than Tuesday. Valley areas are projected to climb into the 99 to 105 degree range, while foothill and mountain areas climb into the 80's to mid 90's Wednesday afternoon. Tomorrow is the best day of the week to plan for indoor activities in the afternoon, or to find a cool body of water to take a dip in late in the day. At the very least make sure you avoid overexcertion and direct sunlight in the afternoon on Wednesday. High pressure begins to shift east on Thursday, and low pressure is projected to track towards the Pacific Northwest from the Pacific. This will drive a 10 to 15 degree drop in our high temperatures, and leave us with some clouds overhead Thursday. Low temperatures will be similar to Wednesday's on Thursday morning. Current projections have valley areas in the upper 80's to lower 90's on Thursday afternoon, while foothill and mountain areas range from the mid 70's to mid 80's. Temperatures will then only top out in the mid 80's to lower 90's in the valley on Friday, while foothill and mountain areas mostly end up in the 70's. We'll have partly to mostly cloudy skies overhead on Friday, and some models are showing a chance for light showers across areas from Shasta County to the north. The shower threat looks to be minimal and confidence is low on wet weather making any kind of an impact on our region, but the cooling trend looks very likely.

Low pressure moves overhead to our north this weekend, and that will bring even cooler temperatures through your Memorial Day Weekend forecast. We'll also have the potential for very light showers across most of our region on Saturday. Models are currently projecting less than a tenth of an inch of rain across northern California on Saturday, with the best chance from Shasta County to the north. Temperatures will start out in the 50's to lower 60's in the valley, 40's to lower 60's in the foothills, and 40's in most mountain areas Saturday morning. We'll have partly to mostly cloudy skies overhead on Saturday. Temperatures are projected to top out in the low to mid 80's in the valley, and 60's to mid 70's in the foothills and our mountain areas Saturday afternoon. Skies will clear out on Sunday and our temperatures will end up a bit cooler than Saturday. Valley areas will top out in the upper 70's to lower 80's, while foothill and mountain areas range from the 60's to lower 70's Sunday afternoon. The latest projections for your Memorial Day Forecast on Monday is for temperatures that are around 3 to 5 degrees warmer than Sunday, and sunny skies over our region. More warming is then expected through the middle of next week.