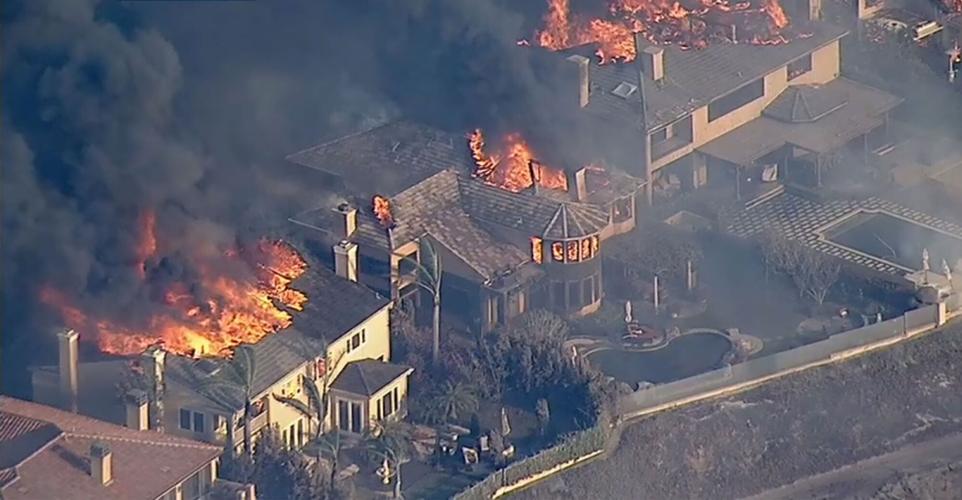 Multiple homes are ablaze in the area. 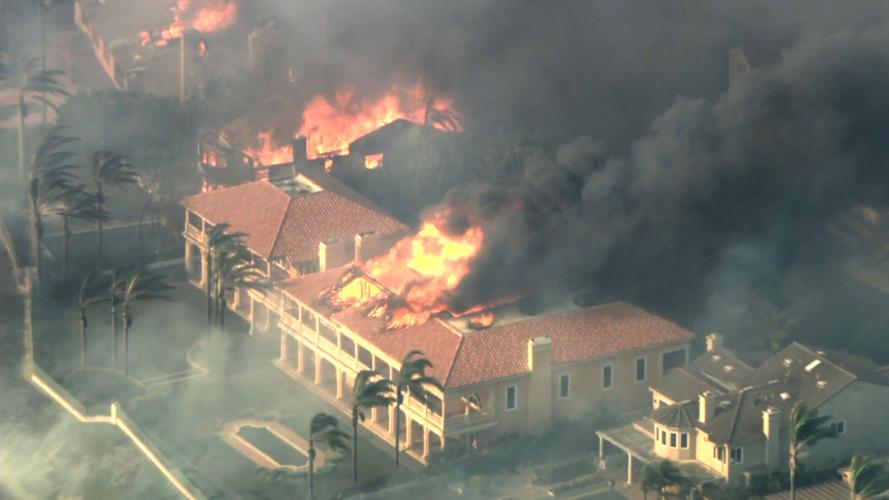 There are evacuation orders issued for Coronado Pointe Drive, Vista Court and Via Las Rosa in the Pacific Island area of Laguna Niguel.

Multiple homes are ablaze in the area.

There are evacuation orders issued for Coronado Pointe Drive, Vista Court and Via Las Rosa in the Pacific Island area of Laguna Niguel.

A rapidly moving brush fire destroyed at least 20 homes and forced the evacuation of nearly a thousand homes in Orange County, California, on Wednesday in a foreboding sign of the new normal for the region.

The Coastal Fire began Wednesday afternoon at about 2:45 p.m. in the Aliso and Wood Canyons Wilderness Park and quickly grew to about 200 acres, Orange County Fire Authority Assistant Chief of Field Operations TJ McGovern said. The fire then spread into the city of Laguna Niguel and ripped through mansions along hillside streets in one of California's richest neighborhoods.

Flames swallowed entire homes and burned through to their interiors in one neighborhood, while firefighters hosed down nearby houses on the same street hoping to save them, footage from CNN affiliate KCBS/KCAL showed.

"I walked down to the shopping center below and the smoke grew maybe two to three times what it was before," she said.

The fire was fueled by gusty winds that reached up to 30 mph in the area, according to nearby observations from the National Weather Service. That is in addition to dry conditions from an ongoing severe drought in the entire region, according to the latest US Drought Monitor.

Even so, there was not a particularly high risk of fire on Wednesday, and officials and scientists were taken aback by the speed and intensity of the blaze. Orange County Fire Chief Brian Fennessy said a brush fire like this used to be relatively minor. Not anymore.

"The fuel beds in this county, throughout Southern California, throughout the West, are so dry that a fire like this is going to be more commonplace," he said.

Despite the efforts of firefighters, the fire still "ran" on first responders, officials said.

"We're seeing spread in ways that we haven't before," Fennessy said. "Five years ago, 10 years ago, a fire like that might have grown to an acre, couple acres" before it was under control. But now, "fire is spreading in this very dry vegetation and taking off," he said.

Wildfires have historically peaked in the late summer and fall in California. But this is the fourth fire Orange County has seen so far this year, McGovern said.

"We don't have a fire season. It's year-round now, and these last four fires that we've had just proved it to all of us," he said.

Evacuation orders were in effect for Coronado Pointe Drive, Vista Court and Via Las Rosa in the Pacific Island area of Laguna Niguel, and a reception area for those who evacuated was set up at the Crown Valley Community Center, the Orange County Sheriff's Department said in a news release.

Laguna Niguel resident Allan Aguilera told CNN he and his family decided to evacuate when they saw the scope of the flames from a lookout point in the neighborhood.

"When we reached the top we saw the full scale of how big the fire was and witness how quickly it was spreading," he said. "There were tons of people in the area doing the same, watching the fire before the winds changed and began pushing the flames closer and closer. At that point we decided to leave and go prepare for potential evacuation."

"The situation was incredibly tense but we kept our cool, gathered our most valuable belongings ... and made an early evacuation to avoid any potential bottle necking if the worst case scenario were to play out," Aguilera added.

Firefighting crews resorted to using water from a pond at the El Niguel Country Club in Laguna Niguel to help fight the flames as thick brown and gray smoke blanketed the area.

From 'fire season' to 'fire year'

California and the Western US are experiencing devastating drought conditions that have led to water restrictions in parts of the state. Last summer, California endured its most severe drought in its 126-year record. And the upcoming months aren't getting any better.

Forecasters with the National Oceanic and Atmospheric Administration are expecting "prolonged, persistent drought in the West where below-average precipitation is most likely," the agency wrote in its spring outlook in March.

Winter and spring are typically the wet seasons for California, but this year has been anything but — especially in the southern half of the state. Los Angeles and Palm Springs are off to their third- and second-driest start to a year, respectively. Records in this region go back more than 70 years.

Statewide, January to April were the driest first four months on record, the US Drought Monitor reported Thursday. Over the past week alone, extreme drought expanded from 40% of the state to 60%.

The region's drought has left vegetation incredibly dry, providing fuel for fires like the one in Laguna Niguel. The West is in a multiyear mega-drought scientists recently reported is the most extreme in 1,200 years, and has been made 72% worse by human-caused climate change.

"We've stopped talking about fire seasons," Issac Sanchez, Cal Fire's battalion chief of communications, told CNN. "The implication of that term is if we're in fire season there's a time of year when we're not in fire season. That's just not the case in California anymore."

"It's a result of climate change, it's a result of the drought we're seeing," Sanchez added. "The Coastal Fire is a graphic example that you don't need thousands of acres burned to impact you."

A 3-month-old baby kidnapped from his grandmother's home in San Jose has been found alive, police say