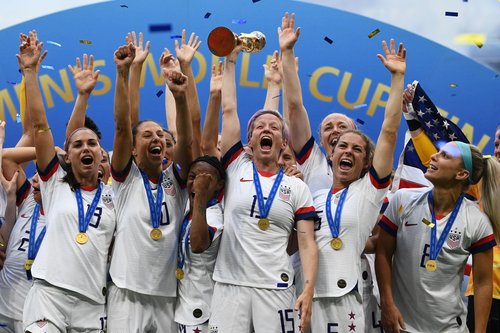 As chants of "equal pay" erupted during the US Women's National Team's World Cup win, one thing was clear: Despite their trophy,...

As chants of "equal pay" erupted during the US Women's National Team's World Cup win, one thing was clear: Despite their trophy, their fight isn't over yet.

In March, 28 USWNT players sued the US Soccer Federation, claiming that it is discriminating against the women's team by paying them less than members of the men's team.

"Despite the fact that these female and male players are called upon to perform the same job responsibilities on their teams and participate in international competitions for their single common employer, the USSF, the female players have been consistently paid less money than their male counterparts," the lawsuit reads. "This is true even though their performance has been superior to that of the male players -- with the female players, in contrast to male players, becoming world champions."

The money is a significant piece of the lawsuit, but it's not the only thing the women are demanding. The lawsuit also claims that the federation has denied them equal playing, training and travel conditions, as well as equal promotion, support and development for their games.

Many have protested the demands, claiming that the men's sport is more difficult and more competitive because not as many countries have invested heavily in their women's teams. And so comparing the two, they say, is like comparing apples and oranges.

But, as the USWNT mentions in the lawsuit, the conditions they play in can also be much worse.

Star Megan Rapinoe tore a ligament in her right knee during training in Hawaii in 2015, while the team was on a victory tour after winning the Women's World Cup. Her injury came while playing on turf, artificial grass that is cheaper to maintain than real grass surfaces. Turf can lead to abrupt stops because of the way it makes contact with the studs on soccer cleats.

All the games in the 2015 Women's World Cup were on turf, despite a lawsuit brought by the players. The men's tournament, meanwhile, has always been held on real grass.

Here's a by-the-numbers comparison of the two teams.

USWNT vs. USMNT, in numbers

4: The number of World Cup wins the women's team has, in only eight tournaments.

4: The number of Olympic gold medals in women's soccer that the team has won, in six tournaments.

$11,400,000: The total projected revenue of the women's events (such as friendlies and tournament play) in fiscal year 2018. After expenses, the team made the US Soccer Federation money, with a surplus of just over $2 million, according to the proposed fiscal year 2018 budget.

$4,950: The maximum amount per game the women's team would earn if they played 20 friendlies and won them all, according to the lawsuit, for a maximum total of $99,000.

These numbers represent an agreement the USWNT had with the US Soccer Federation that ended in December 2016. The Washington Post reported that, under the latest agreement, the women's team would still earn about $28,333 less than the men's team in the same scenario. If both teams lost all 20 games, the two teams would make the same amount.

Hi: 99° Lo: 65°
Feels Like: 78°
More Weather
The Heat Advisory will stay in place through Thursday evening. Cooler temperatures and the potential for active weather is on the way as we head into your weekend.