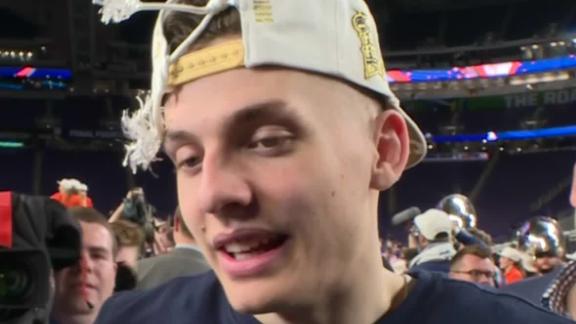 Virginia junior guard Kyle Guy talks to CNN's Andy Scholes after being named the NCAA Final Four's Most Outstanding Player for his contributions to help the Cavaliers win their first national championship.

History was guaranteed at the NCAA men's basketball championship on Monday, with the Virginia Cavaliers and Texas Tech Red Raiders making their debuts in the national final.

And when it was over, redemption for Virginia was complete.

A year after becoming the first No. 1 seed in men's college basketball history to lose to a No. 16 seed in the NCAA tournament, the Cavaliers are national champions, defeating No. 3 seed Texas Tech 85-77 in overtime at US Bank Stadium in Minneapolis.

"We were destined to win," Virginia redshirt sophomore De'Andre Hunter, who led all scorers with 27 points, said to Westwood One. "We had to."

It almost felt like it was a script for a movie. Winning a title was a fitting ending considering how 2018 ended for Virginia (35-3).

After being shocked by No. 16 seed University of Maryland, Baltimore County (UMBC) in the NCAA tournament last season -- the Cavaliers lost that one by 20 points -- Virginia was the lone No. 1 seed to reach the Final Four this year.

"When they come into my office, I got a poster of Rocky on the steps," Virginia head coach Tony Bennett said to CBS. "And I told them, I just want a chance at a title fight one day."

For Cavaliers junior Kyle Guy, who was named most outstanding player and had 24 points, he believed "this is how this it was supposed to end," he told Westwood One.

"That's a dark place that I think a lot of us were in," Guy said of losing to UMBC last year. "There was humiliation, embarrassment for ourselves and our families and the program. To be able to redeem all that, and give this program something that's never happened before is all that I could ever want."

"I think every father would love to see his son do a heck of a lot better than he did," Dick Bennett said to Westwood One.

This was the third Final Four appearance for the Cavaliers and first since 1984.

It was the first Final Four and championship game appearance for Texas Tech (31-7), a school that has just one national championship in any team sport in its history. That came from the women's basketball team in 1993 led by the legendary Sheryl Swoopes. That team is so revered in Lubbock that there is a freeway named after the coach, Marsha Sharp.

A school in a state better known for football -- NFL MVP and former Texas Tech quarterback Patrick Mahomes was in attendance Saturday and Monday and spoke to the team -- Texas Tech and its Red Raiders have made a swift ascension on the hardwood.

An assistant for the Red Raiders under Bob Knight and Pat Knight from 2001 to 2011, Beard has been a head coach in Division I -- the highest level in the NCAA -- for four years.

He previously coached in Division II for Angelo State and McMurry University in Division III (both in Texas) and for the American Basketball Association's South Carolina Warriors. His first two head coaching opportunities came at the junior college level with Fort Scott Community College in Kansas and Seminole State College in Oklahoma.

"When you talk about team of destiny, I just think they're really, really good," Beard said of Virginia to CBS after the loss.

"The poise, and they just find ways to win. I just want to congratulate them, their program. It's just an honor to compete with them on this biggest stage, on Monday night. I have nothing but respect for their program. In terms of my guys, I've never been more proud in coaching. This is real life. We'll bounce back. I'm just so proud of those guys."

On Monday, Francis had 17 points off the bench to lead Texas Tech. Sophomores Jarrett Culver and Davide Moretti each had 15.

This was the first meeting between the two men's basketball programs.

This year's NCAA men's Final Four had a bit of a different feel to it. Missing this year were the well-known established blue bloods: This is the first Final Four since 1987 that didn't have Duke, North Carolina, Kansas, Kentucky, Louisville or UCLA.

Hi: 96° Lo: 62°
Feels Like: 66°
More Weather
Today will be a fantastic day to get outside but this weekend we warm up rapidly with several triple digits days in a row next week.

Elderly couple stabbed in their home in Los Molinos

Vegetation fire in Palermo spreads to multiple nearby structures

The rental car industry has ground to a near halt. This is what that means for automakers and car buyers