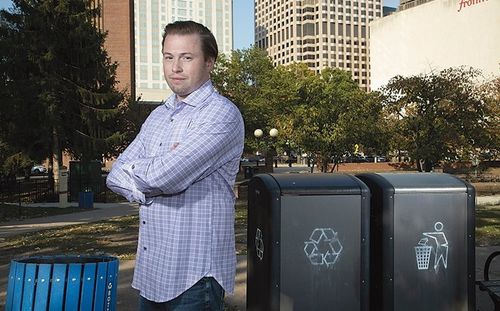 Hartford, CT (Hartford Business Journal) -- The ways the U.S. and other countries produce electricity and dispose of garbage continue to damage the environment and climate, despite advances in clean energy and recycling.

They’re global problems with high stakes, and a Farmington Valley native wants to help tackle both at the same time.

Bjornulf Ostvik, founder and CEO of Connecticut startup Ecogensus, has patented shipping container-sized receptacles that heat solid waste into a dense char that can later be burned as fuel, replacing dirtier burning coal in power plants and cement factories.

“We sit at the nexus, or create a nexus, between the waste industry and the utility industry,” Ostvik said in a recent interview.

Ecogensus has been headquartered for the past few years in downtown Hartford’s CityPlace II office tower, but is currently shopping for a larger home office. The company, which has under 25 employees, also has property in West Hartford and Rocky Hill.

Ecogensus started commercial production of its “EGS-5000L” units in August at a Texas factory. It remains to be seen whether the technology will catch on.

Ostvik, 40, is a Georgetown Law grad with an accomplished resumé that includes three years at defense giant Lockheed Martin, where he led teams developing new technologies for the military and other customers, and four years as an executive officer at a publicly traded wastewater infrastructure company.

Since 2015, however, Ostvik has also spent a fair amount of time in court, including as a witness in two high-profile criminal corruption trials in New York that ultimately sent a powerful state senator and his son to prison.

Meantime, Ostvik is currently suing his former corporate attorneys for more than $100 million, alleging they extorted him and conspired to gain control of Ecogensus and related entities.

In addition, a law firm that subleased Ecogensus its CityPlace II office is now suing the company, alleging it failed to pay more than $56,000 in rent and fees in recent months.

Ostvik claims he gave proper notice terminating the month-to-month agreement as of March, but said the COVID-19 pandemic delayed his ability to fully move out of the space on time.

Despite the legal entanglements, Ostvik says Ecogensus is poised to succeed.

“We are getting global interest,” he said. “People are reaching out from all over the world and all over the country.”

Landfilling is the dominant waste-disposal method in the United States. Burning waste to produce energy, which has been Connecticut’s preferred method in recent decades, is also prevalent.

Ostvik hopes Ecogensus can help reduce the need to do both.

“The idea of aggregating waste and shipping it across state lines to then put it in a hole in the ground is a horrible thing for human health and the environment,” he said.

“If they are actually dealing with different feedstocks, that’s very substantial actually,” Shah said. “It could be groundbreaking if they have solved this problem.”

Plenty of torrefaction startups have failed over the years, according to Tom Causer, chief operating officer at Missouri-based Advanced Torrefaction Systems.

Besides confounding engineering challenges, other hurdles have included a lack of capital investment and fire hazards.

“The fact is a lot of developers underestimated the challenge, much to their detriment,” said Causer. “Engineers still underestimate this challenge.”

Ostvik said he’s confident in Ecogensus’ engineering and that fires aren’t an issue because the company’s product requires lower temperatures than what has been used by other torrefaction technologies.

In addition, Ecogensus has private U.S.-based investors, whom Ostvik declined to disclose, but he said one is a large, publicly traded insurance company.

He also wouldn’t identify how many EGS-5000L units have sold so far, or their retail price, but said there’s plenty of production capacity at the 210,000-square-foot Texas factory owned by Titan Production Equipment.

Ostvik said Ecogensus is talking to private equity firms and other potential investors as it seeks to raise additional capital.

Boosting his confidence is a recent study of how Ecogensus’ biofuel performs in coal plants. That study, conducted by a German company called Uniper, found that the biofuel is technically suitable for use in large power plants with little or no capital outlay required to modify existing equipment, though Uniper did acknowledge some potential challenges that could arise, such as deposits forming inside a boiler (which is known as “slagging”), for certain facilities.

The Skelos trial Ostvik is working to make waves in the alternative energy industry, but he’s also made headlines he’d prefer to put behind him.

In 2010, Ostvik left Lockheed and joined an Arizona-based company called Abtech that would eventually be embroiled in a New York state government corruption probe.

Abtech in 2012 was working to win government wastewater-management contracts in the Empire State and hired the son of then-New York Senate Majority Leader Dean Skelos as a consultant.

Adam Skelos reported to Ostvik, who was executive vice president of corporate strategy and business development.

In 2015, federal prosecutors arrested the Skeloses on corruption charges, alleging they secured more than $200,000 in illegal payments from Abtech and several other companies “through implicit and explicit representations that Dean Skelos would use his official position to benefit those who made the payments, and punish those who did not.”

Dean Skelos had helped Abtech secure a $12-million contract in Nassau County, and later pursued legislation and additional funding that could benefit the company.

Ostvik, who was visited by FBI agents a few months before the Skeloses were arrested, agreed to cooperate with the investigation and testify at the trial. He avoided any potential criminal charges as a result, according to a transcript of his court testimony delivered in 2015 and again in 2018 during a retrial.

The Skeloses were found guilty in both trials, and each was sentenced in 2018 to about four years in prison.

“I am proud of my role helping the government in their prosecution,” Ostvik told HBJ. “It also proved to be an invaluable learning experience for me, and I think it was important that justice was served in that case.”

$100M civil RICO lawsuit Ostvik’s name has been absent from New York newspapers for a few years now, but he’s not avoided the courthouse.

In May, Ostvik filed a $100-million lawsuit against several of his former attorneys — including general counsel Matthew Pacella and a Chicago-area law firm called Edelson whose attorneys had been his outside counsel — alleging they had conspired to extort him for payments and control of his business ventures by threatening to release sensitive personal information he had shared in confidence. The suit also alleges that Pacella had physically pushed Ostvik and told him he had an uncle in the mafia.

“We brought that action to put a stop to the attorneys’ misuse of personal and privileged information as well as certain other breaches of their professional obligations to me and my businesses,” Ostvik said.

The defendants in the Ecogensus lawsuit have called the allegations “objectively and provably false” and have filed motions asking the court to sanction Ecogensus and its attorneys, and to dismiss the complaint.

The result is an energy-dense biofuel that’s easier to transport, store, grind and incinerate to produce energy.

It closely resembles coal, but is cleaner, Ostvik says, because torrefaction removes volatile compounds, while coal mined from the ground contains harmful heavy metals like mercury. In addition, every lump of coal that’s burned introduces into the atmosphere additional carbon dioxide that’s been trapped in the ground for millions of years. Ostvik doesn’t view burning biofuel as a permanent climate solution, but a way to quickly reduce emissions while transitioning to clean energy over the coming decades.

Torrefaction isn’t new. It’s been used to treat wood pellets and other types of biomass that are then burned or decomposed to generate electricity. But creating a biofuel that can produce similar amounts of energy as coal — and also be burned in coal plants without major equipment upgrades or technical problems — has been a major challenge for the technology, Ostvik said.

Also, the fact that Ecogensus’ technology can process a variety of materials in a single batch, including mixed plastics, is a unique advantage because it cuts down on the need for pre-sorting the waste, he added.

“Torrefaction is not easy technically to do with a mixed and difficult feedstock. We were able to get there,” he said. “We really think we’re the world leader in this space.”

Hi: 68° Lo: 43°
Feels Like: 68°
More Weather
It’s Saturday!! The weather is looking good for the final day of the weekend! Tonight will look very similar to what we saw last night, temperatures in the upper 30s to low 40s with a mostly clear sky.