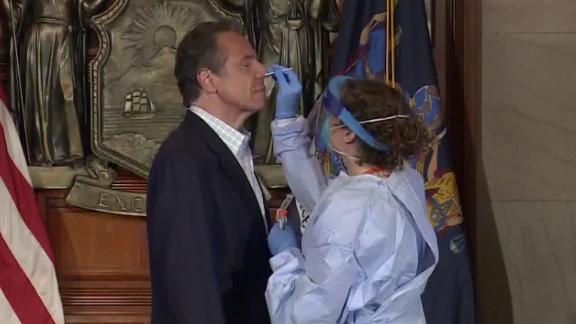 New York Gov. Andrew Cuomo got a coronavirus test during his daily news briefing, saying "it is so fast and so easy that even the governor can take this test."

A key coronavirus model has revised its death projection for the United States slightly downward, now forecasting that 143,360 people will die by August 4.

That's about 3,700 fewer deaths than the Institute for Health Metrics and Evaluation (IMHE) model foresaw when last updated about a week ago.

The news comes as the coronavirus death toll in the United States has passed another somber milestone. More than 90,000 people now have died, and more than 1.5 million people have been infected, according to Johns Hopkins University data.

The shift in the model's fatalities forecast is small, but it marks a departure from recent increases in the model's death projections, which have been largely based on increases in mobility across the country and the easing of social distancing measures.

As people have been moving around more -- and as social distancing measures have been relaxed -- the model has projected more deaths.

But one researcher at the IHME at the University of Washington, who program the model, said that fewer people are forecasted to die in certain parts of the country.

'We were pretty surprised,' said Chris Murray, the chairman of the school's Health Metrics Sciences department. 'We were expecting to probably go up because of the big surge in mobility.'

Murray told CNN's Anderson Cooper that they didn't find a correlation between mobility and deaths.

They believe the difference lies in the number of individuals wearing masks and that people are being careful to keep their distance from others.

Submit your questions about school during the pandemic

As research teams scramble to create or test vaccines, one company announced a milestone in its progress Monday.

If future studies go well, the company's vaccine could be available to the public as early as January, said Moderna Chief Medical Officer Dr. Tal Zaks.

But the results of the study, which was led by the National Institutes Health, have not been peer reviewed. And there's much more work to be done, Zaks said.

'We are going to have to conduct formal efficacy trials where you vaccinate many, many people, and then you monitor them in the ensuing months to make sure they don't get sick,' he said.

The announcement was one of Monday's developments that prompted President Donald Trump to call it 'a very big day therapeutically, cure-wise and vaccine-wise.'

The President later told reporters he has been taking the drug hydroxychloroquine for a couple of weeks. Trump, who had tested negative for the coronavirus, said he heard positive things about the drug.

'Because I think it's good; I've heard a lot of good stories. And if it's not good, I'll tell you right. I'm not going to get hurt by it,' he said.

Millions more can go to the gym and retail stores

'We've all been doing our jobs to fight (coronavirus), and as a result, positive case rates are moving in the right direction and hospitalizations are down,' Baker said.

All public transportation riders in the Boston area must continue wearing face masks. Baker said more sectors of the economy will be allowed to open in phases, with the next one starting May 25.

Florida entered its first full phase of reopening Monday, allowing restaurants, retail stores and gyms across the state to reopen with certain restrictions.

California, the first state to issue a statewide stay-at-home order, is now in its second of four reopening phases.

'I deeply understand the stress and anxiety that people have, that entire dreams have been torn asunder because of the shutdowns, their savings account depleted and their credit ratings destroyed,' Gov. Gavin Newsom said.

Texas, one of the first to start reopening, had its highest single-day increase in new cases over the weekend. Restaurants, movie theaters and malls have been open for more than two weeks, but the governor has attributed an increase in coronavirus cases to more testing.

Why it'll take weeks to see the health effects of reopening

And in New York, New Jersey, Connecticut and Delaware, beaches will be open for Memorial Day weekend, with restrictions.

But with greater freedoms come more responsibilities to prevent a resurgence of coronavirus -- which would lead to another blow to the economy.

'About 90% of our economy is back open because we thought it was a huge risk not to reopen,' DeWine said Sunday.

If the situation gets worse, 'we're prepared to do what we have to do to pull back,' he said.

'We don't want to be like some of the other countries we've seen where they shut down, opened up, and now are starting to shut down again,' DeWine said. 'And it's in everyone's collective hands how we act in the next month or two, whether or not we're going to be in that position.'

In Georgia, Gov. Brian Kemp also said the state will keep tracking the numbers and 'will take whatever action is necessary to protect the lives and the livelihoods of all Georgians.'

Connecticut on Wednesday will be the last state to start reopening. Officials announced a website with 'strict safety guidelines' that businesses must meet before reopening.

Where each state stands in the reopening process

Testing increases, but so do concerns about accuracy

Health and Human Services Secretary Alex Azar said the US has conducted more than 10 million coronavirus tests, and the federal government is deploying rapid tests to meatpacking facilities and nursing homes.

But there are new concerns about the accuracy of some diagnostic tests, which are supposed to determine whether someone currently has the virus.

AdventHealth said about 35,000 coronavirus tests -- 33,000 of which were conducted in Florida -- have been deemed unreliable because problems at a processing lab.

AdventHealth declined to name the lab, but said it was 'working diligently' to notify people who may be affected.

The news comes after concerns about the accuracy of antibody tests, which are supposed to tell whether you've been exposed to the virus in the past.

Health officials stress that it's too early to know whether having coronavirus antibodies means you have long-term immunity against a second infection -- or if you have immunity at all.

The Navajo Nation, with the rate of 2,304.41 cases of Covid-19 cases per 100,000 people, has surpassed New York and New Jersey for the highest per-capita infection rate.

There are at least 4,002 infections in the Navajo Nation, which spans parts of Arizona, New Mexico, and Utah.

The Native American territory had a population of 173,667, according to the 2010 census.

The president of the Navajo Nation, Jonathan Nez, attributed the virus' spread among his people to close living conditions and the area being a 'food desert.'

'Most of our food and supplies come from the 13 shopping centers, convenience stores, and gas stations throughout the Navajo,' Nez said

He added the Nation was also testing for coronavirus at a higher rate than states.

Hi: 107° Lo: 65°
Feels Like: 81°
More Weather
Today a heat wave continues but tomorrow night rain moves in, lasting into Saturday with much cooler temperatures. We warm up again on Tuesday.