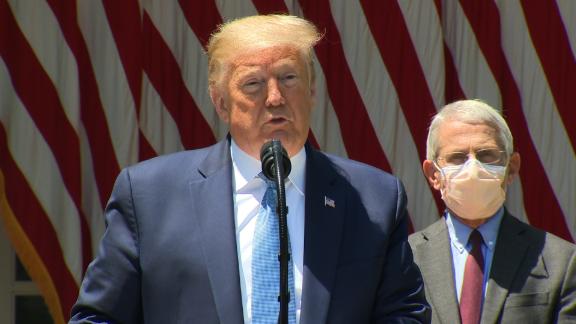 President Donald Trump announces "Operation Warp Speed," a program to develop a coronavirus vaccine, during a press conference in the Rose Garden.

Trump has brushed off all three -- a Democratic-aligned independent from Maine, a Republican from Tennessee, an admiral he appointed. He calls testing 'overrated' while asserting, nonsensically, that more tests merely inflate the number of coronavirus cases.

'An astonishing failure of competent leadership,' King concluded in an interview with CNN. And it's one that demonstrates a jarring reality of America's fight against the global pandemic.

After briefly embracing the role of 'wartime President,' Trump has all but quit the battlefield in favor of cheerleading for economic revival. In the absence of reliable White House leadership, a haphazard combination of federal, state and private sector efforts has gradually boosted testing levels even without a national plan.

The decline in the proportion of positive tests points toward an ebb-tide for the pandemic nationally. Yet public health officials warn that the commander-in-chief's retreat on halting the virus now threatens to slow or reverse progress that the painful stay-at-home measures and economic shutdown have bought. The British medical journal The Lancet denounced the Trump administration as 'obsessed with magic bullets' such as vaccines, while remaining 'nowhere near' the level of testing the fight requires.

Meantime, Trump is dangling promises of a broadly-available vaccine by year-end -- a prospect that public health experts consider unlikely. He's ignored broad safety guidelines he offered for reopening the economy just a month ago, and praised armed protesters demanding that governors drop restrictions. And he withheld detailed guidance for businesses and schools on re-opening prudently, limiting the Centers for Disease Control and Prevention to offering a cursory six-page collection of 'decision trees.'

He muted his support for helping state and local governments on the front lines of the pandemic. As his appointed Federal Reserve chair Jerome Powell implored the White House and Congress to keep thinking big on fiscal relief, Trump cautioned against state-level profligacy and linked emergency relief to unrelated ideological goals on immigration and taxes.

A pattern of downplaying threats

Better-suited for salesmanship than policy-making, Trump has minimized the battle from the start. He downplayed the coronavirus threat to avoid disturbing election-year economic growth.

Once he could no longer avoid it, the President followed rather than led -- and stumbled.

In February, Congressional Republicans and Democrats alike spurned his request for emergency coronavirus spending as inadequate. They tripled it.

In March, Trump falsely asserted that any American could obtain a coronavirus test. That remains untrue even now.

Trump's decisive embarrassment came at the coronavirus task force briefing on April 23, when he suggested that injections of household disinfectant might become a cure. The White House halted daily briefings soon thereafter.

On initial coronavirus relief legislation, House Speaker Nancy Pelosi negotiated with Treasury Secretary Steven Mnuchin without even talking to Trump. In recent days, as she and fellow Democrats prepared the new $3 trillion bill including state and local government aid, she acted as if the President didn't matter at all.

'Don't waste your time or mine on what he says,' Pelosi told a C-SPAN interviewer. House passage of the bill on Friday evening marked the potential opening of fresh negotiations with the Republican-controlled Senate over a fourth relief package.

Focusing on enemies rather than threats

On Twitter, Trump devotes less attention to the pandemic than to punching political enemies. At a White House press conference last week, he signaled how casually he takes his responsibilities on fighting the virus.

Days after a Trump valet and Vice President Mike Pence's press secretary tested positive, a White House memo requiring mask-wearing inside 1600 Pennsylvania Avenue was enacted to limit further spread. A reporter asked Trump if he had ordered it.

'Yeah, I did. I did. I required it. Yes,' the President replied. But he hasn't been seen wearing a mask yet.

On a conference call the same day, Pence urged governors to test all residents of nursing homes - a locus of infections nationwide. A journalist asked Trump if he would require that.

'I will mandate it, if you'd like,' the President responded. He has not.