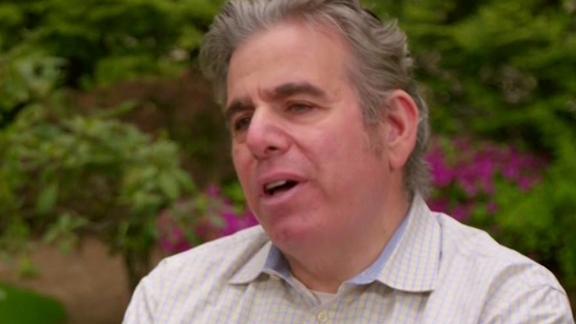 Lawrence Garbuz has spent the last two months recovering from Covid-19. Health officials think he may have been one of the earliest cases in New York City.

As leading medical experts testified Tuesday to senators for the first time since March about government's response to the coronavirus pandemic, officials in one of the nation's most populous counties said a stay-at-home order will stay in place for months as restrictions are slowly lifted.

'With all certainty,' the local order will be extended another three months, Dr. Barbara Ferrer, the health director of Los Angeles County, said at a Board of Supervisors virtual meeting. Restrictions on businesses and public places will continue to be lifted, while the order remains, Ferrer explained.

'I think quite simply she's saying we're not going to fully reopen Los Angeles -- or anywhere in America -- without any protections or health orders in the next three months,' he told CNN's Jake Tapper.

'I think we know it's going to be even longer than three months. ... We're not moving past Covid-19, we're learning to live with it. We're not going to go back to pre-Covid life any time soon' or move forward without a medicine or vaccine.

Garcetti said some segments of the population will need to stay at home for months.

Last week, some stores and outdoor spaces in the county were reopened with restrictions. Beaches open Wednesday for runners, swimmers and surfers, but not sunbathers.

'Recovery will be months long, based on the tools we have at hand today,' Ferrer said. In order to fully reopen, medicine for treatment and in-home tests need to be readily available.

Here's where all 50 states stand on reopening

Number of inflammatory illnesses in NY children rises to around 100

New York health officials are now investigating about 100 cases of an inflammatory illness in children that might be related to Covid-19, up from 73 last week, Gov. Andrew Cuomo said Tuesday.

The children had been hospitalized with a condition doctors described as 'pediatric multisystem inflammatory syndrome.'

The children had fever and symptoms similar to toxic shock syndrome and Kawasaki disease, the state has said. Kawasaki disease causes inflammation in the walls of blood vessels, including those that supply blood to the heart, which in rare cases can lead to deadly limitations in blood flow.

Three youths -- a teenager and a 5-year-old and a 7-year-old -- have died of the inflammatory illness, officials have said.

Medical experts said that immune treatments and blood thinners can help children affected by the syndrome.

'To date, most children affected have done well. Treatments have included anticoagulation, IV immunoglobulin, IL-1 or IL-6 blockade, and corticosteroids. Some children have only needed supportive care,' Boston Children's Hospital said on its website.

New York has said many of its pediatric patients tested positive for Covid-19 or had its antibodies, but that they did not present with typical symptoms for the coronavirus disease. So health officials are investigating whether coronavirus presents a danger to children not previously understood.

Similar reports of this syndrome in children have been made in Seattle; at Stanford Children's Hospital in California; and in the United Kingdom, Italy and Spain.

More data points to virus spreading in January, or earlier

More evidence is emerging that the virus was in the country earlier than initially thought.

'I think we'll see a lot more of this. I also think there are a lot of deaths and coroner reports yet to be seen, so I think as time goes on, we will learn more and more about history with this virus,' Acton said Monday.

That meshes with a growing body of research suggesting the virus was spreading in the United States and elsewhere at least weeks, if not months, before official case counts started picking up in February and March.

Ohio will soon conduct 1,200 voluntary antibody tests to help it understand how many people already were infected without knowing it, Acton said. Some state and county governments, including Illinois' Cook County, have said they're reviewing deaths as far back as late last year to see whether they could be connected to the virus.

On Tuesday, the nation's top infectious disease expert warned senators of serious consequences for states reducing social distancing restrictions ahead of federally suggested milestones, even with the pandemic already having claimed more than 80,000 lives in the US.

Those milestones, which the White House recommended in mid-April, include a downward trajectory in virus cases for 14 days and a robust testing program in place for at-risk health care workers.

'If some areas, cities, states or what have you jump over those various checkpoints and prematurely open up without having the capability of being able to respond effectively and efficiently, my concern is that we will start to see little spikes that might turn into outbreaks,' Fauci told the Senate Committee on Health, Education, Labor & Pensions.

The hearing was Democrats' first chance in weeks to question leading medical experts -- including Fauci and Centers for Disease Control and Prevention Director Robert Redfield -- about the Trump administration's response to the pandemic.

Witnesses made appearances remotely because they're self-isolating or self-quarantining after contact with people who tested positive for coronavirus.

Ahead of the testimony, 54% of Americans say the US government is doing a poor job preventing the spread of Covid-19, according to a new CNN poll.

Also, a vast majority of poll's respondents were 'afraid' or 'concerned' (35% and 46%, respectively) about the potential for a second wave of Covid-19 cases this year, while 18% were not concerned. Those two questions in the multi-topic poll -- conducted by phone Thursday through Sunday, with 1,112 adult Americans -- had a margin of error of +/- 3.7%.

So far, more than 1.35 million people have been infected in the US, while at least 81,571 have died. And the global death toll is approaching 300,000 reported deaths, according to Johns Hopkins University.

Some other developments from Tuesday's Senate panel hearing:

• Don't expect a vaccine in time for the start of the school year in the fall, Fauci said. That goes with what he's said previously about a vaccine: Maybe January at the earliest, and even that's pushing it. So, schools will have to rely on testing to help students feel safe enough to return, Fauci said.

• School reopenings will vary from region to region because 'dynamics of the outbreak are different in different regions,' Fauci said.

• The nation's actual death toll is likely higher than reported, Fauci said. He cited New York City, where the health care system was overwhelmed. 'There may have been people who died at home (in that city) who did have ... Covid who are not counted as Covid because they never really got to the hospital.'

• The US should have the capacity to produce, distribute and apply 'at least 40 (million) to 50 million tests per month' by September, said Adm. Dr. Brett Giroir, assistant secretary for health at the Department of Health and Human Services.

The federal government has been under fire for the pace of the country's production of coronavirus tests. Public health experts say regular testing is critical to understanding the spread of the virus and to control it.

Hi: 107° Lo: 65°
Feels Like: 79°
More Weather
Today a heat wave continues but tomorrow night rain moves in, lasting into Saturday with much cooler temperatures. We warm up again on Tuesday.