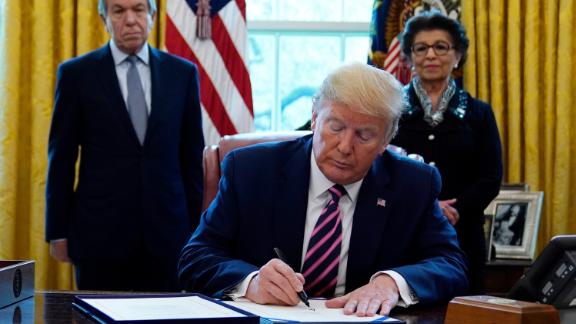 The United States has scaled back its role on the world stage, taken actions that are undermining efforts to battle the coronavirus pandemic and left the international community without a traditional global leader, according to experts, diplomats and analysts.

The US -- usually at the head of the table helping to coordinate in global crises -- has declined to take a seat at virtual international meetings convened by the World Health Organization and the European Union to coordinate work on potentially lifesaving vaccines.

Former world leaders warn that the Trump administration risks alienating allies by politicizing the deadly pandemic with its push to punish China and have other nations choose sides.

The administration's decision to halt funding for the WHO, the world body best positioned to coordinate the global response to the raging pandemic, has appalled global health officials.

On Friday the US blocked a vote on a UN Security Council resolution that called for a global ceasefire aimed at collectively assisting a planet devastated by the outbreak. The US did not want any reference to the WHO in the text and rejected a compromise version that didn't directly mention the organization -- and instead cited the UN's 'specialized health agencies,' according to two diplomats familiar with the process.

The US has similarly blocked expressions of global unity at G7 and G20 meetings due to anger about China and the WHO.

And where US presidents have in the past offered a steadying voice, observers from the Asia Pacific to Europe expressed incredulity, amusement and sadness at President Donald Trump's briefings on the virus, saying they are deeply damaging to the US image abroad.

US officials push back, touting both funding to fight Covid-19 as well as work Trump is doing through the Group of Seven and bilaterally -- leading more than 50 calls with world leaders. But experts say funding without full global coordination can slow overall progress.

At a time when nearly 4 million people worldwide have been infected with the virus, diplomats say many countries are yearning for the firm US leadership they've seen at historic moments and in prior epidemics, citing President Barack Obama's response to Ebola and President George W. Bush's work on HIV/AIDS.

'They want the US to lean in more,' said one European diplomat. 'We know they're doing a great deal with countries, including developing countries, bilaterally ... but a lot of countries hanker after the decisive US effort that we saw when the Berlin Wall came down. A lot of countries believe this is one of those pivotal moments in history and the US has always led at those times.'

Critics say the Trump administration's approach to the coronavirus hasn't just hampered the fight against the pandemic, it has increased uncertainty, eroded respect for the US and deepened concern that the international system no longer functions effectively.

'The world is looking for global leadership. It's a global problem -- it affects literally everyone on the planet. This is a time when you expect the leaders of superpowers in a very constructive way to help coordinate and structure the response,' said Robert Yates, director of the Global Health Program at Chatham House, a British think tank. 'One would expect the US to have a leading role in trying to coordinate global efforts. That's been completely lacking.'

Global health officials found Trump's move to cut funding for the WHO in the middle of a pandemic 'absolutely breathtaking,' Yates added. 'It's worse than a lack of coordination, it almost seems destructive.'

A senior State Department official told reporters Tuesday that the President 'has concerns' about the WHO, which Trump has accused of being biased in China's favor. The official repeatedly stressed that the US 'is the single largest health and humanitarian donor in the world' and said the US 'and President Trump are leading the global effort to combat this pandemic,' in part through the US presidency of the G7.

But the machinery of a US-led international response isn't kicking into gear this time, said Gayle Smith, president and CEO of the nonprofit ONE Campaign.

By and large, she noted, 'we've not seen the kind of summitry, urgency of meetings at the UN Security Council, heads of state coming together to organize, to figure out how we manage, for example, global supply chains.'

'Everybody in the world is looking for the same goods. How do we make sure that the global economy stays where it needs to be?' asked Smith, a former administrator of the US Agency for International Development. And while she notes the G7 and G20 have held virtual meetings, 'I would very much like to see the United States taking the kind of extra effort to mobilize the world at multiple levels.'

US officials say Trump has convened regular virtual meetings with G7 ministers to coordinate assistance to other countries, but the White House has skipped international meetings to coordinate on the hunt for a vaccine, leaving experts disconcerted. One meeting was organized by WHO, while another meeting Monday of more than 40 countries and several organizations raised $8 billion in pledges and yielded a commitment that whoever produces an effective vaccine first will share it with the rest of the world.

The US absence was 'really, really unfortunate' said Smith, not just 'because the US has historically been a leader,' but because the US has a national interest in being part of the group 'that is trying to accelerate the development of vaccines and therapeutics, because obviously we're going to need a vaccine here. ... I think it would be wise, and in our interest, to be involved on the ground floor.'

Stephen Morrison, director of the Global Health Policy Center at the Center for Strategic and International Studies, said, 'It's a very crazy and disturbing thing that [the US] would be going its own way and sitting this out. It's the country with the greatest financing capacity, biggest foundational interest, greatest R&D capacity.'

He noted that the Trump administration has started its own 'warp speed' effort toward developing a vaccine, pointing to the complicated web of interests that's required to develop one, including manufacturing and testing issues. 'I don't know that it's conceivable to have a go-it-alone effort,' he said.

Questioned repeatedly on Tuesday about the US absence from the vaccine meetings, the State Department official stressed how much funding the US is giving to the Covid fight. A day later, the State Department issued a statement stressing the US funding and its work with organizations such as the Global Alliance on Vaccines and said the US saw the vaccine conferences as 'complementary to our ongoing efforts.'

It added that 'as we make progress in this global fight against Covid-19, we count on our Allies and partners joining the United States to ask the hard questions that are needed of China, as well as the WHO.'

The US push to punish China has unsettled allies, who see it as a White House political move to insulate Trump from blame for the uneven US response to the pandemic in an election year -- and as a stressful demand for countries to choose sides.

'I am afraid everything is political,' said a German diplomat discussing Secretary of State Mike Pompeo's insistence that intelligence indicates the virus originated in a Chinese lab, though he has not provided evidence. 'It is just pretty obvious that it is part of the campaign.'

A French diplomat said bluntly that 'we cannot turn our back on China. It is a big partner. Nobody can. We need to keep partnership.'

Former British Prime Minister Theresa May spoke more directly to allied concerns about the US campaign against China, warning in a Times op-ed that 'it would be a mistake to allow this to become a fault line in international relations.'

The European diplomat said that a number of countries feel that 'at the moment, the priority has to be getting on top of the pandemic globally that requires a lot of cooperation. ... China needs to be a part of that and the WHO has to be involved. ... Anything that might detract from that effort at the moment makes people a little nervous.'

The US President's behavior has also made many international observers a little nervous.

They and other experts say that the sense of the US as a steadying force in troubled times is fading, in large part because of Trump's televised coronavirus briefings, which Yates called a 'tremendous embarrassment.' Some observers pointed to Trump's apparent suggestion to look into whether people might be able to inject disinfectant to counter Covid -- a dangerous idea that left health officials worldwide scrambling to counter and had some, like Australia's chief medical officer, laughing incredulously on camera.

Thomas Gomart, director of the Paris-based French Institute of International Relations, said that Europe was watching Trump's response to the pandemic in amazement, calling his behavior 'stranger than fiction.'

'He provides for us a very mixed balance of amusement and a sadness, which is just not what is expected from a US president,' Gomart said, an assessment that Spain's Javier del Pino, a leading journalist, shared.

'The way we look at Trump, it was a lot of fun at first,' del Pino said. 'It's not funny anymore.'