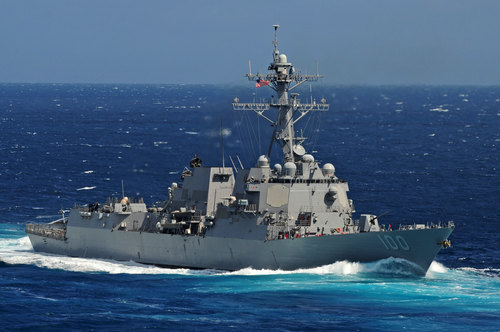 A US Navy destroyer performing a counter narcotics mission has been hit by an outbreak of at least 18 coronavirus cases, a US Navy official tells CNN....

A US Navy destroyer performing a counter narcotics mission has been hit by an outbreak of at least 18 coronavirus cases, a US Navy official tells CNN.

The USS Kidd is the second ship to be impacted by a major outbreak of the virus while at sea following the aircraft carrier USS Theodore Roosevelt.

The Pentagon later confirmed that there has been an outbreak on the ship, with more than one sailor testing positive out of a crew of around 330. The ship is assigned to the recently enhanced counter narcotics mission in the Caribbean/Eastern Pacific aimed at countering illicit drug trafficking.

The first sailor that tested positive was medevac'd off the ship when he displayed symptoms, according to Pentagon spokesperson Jonathan Hoffman, and tested positive at a medical treatment facility in San Antonio.

"The Sailor is stable and receiving care at a medical treatment facility in San Antonio, Texas," the Navy said in a statement Friday.

There have since been other sailors on the ship who have tested positive and the Navy statement added that "testing continues, and we expect additional cases."

"They are preparing to return to port, where they will undertake efforts to clean the ship. They will remove a portion of the crew from the ship. And work to get everybody back to health and get the ship back to sea," said Hoffman.

An eight member Navy medical team has flown out to the ship and is conducting contact tracing and isolating individuals who may have been exposed, according to Hoffman.

News of the outbreak aboard the USS Kidd comes as the number of cases aboard the aircraft carrier USS Theodore Roosevelt continues to increase.

The Navy said Thursday that 840 sailors from the ship have tested positive for coronavirus and 100% of the crew has been tested. Four sailors are being treated for coronavirus symptoms in US Naval Hospital Guam.

More than 4,000 members of the crew have been moved ashore to Guam.

The handing of the outbreak aboard the aircraft carrier which led to the firing of the ship's commanding officer, Capt. Brett Crozier and the resignation of the acting Navy Secretary, has been the subject of a Navy investigation, the results of which are due to be briefed to Defense Secretary Mark Esper later on Friday.

"Later today Secretary Esper will meet with the Chief of Naval Operations Admiral Gilday to discuss the results of the vice chief of naval operations Admiral Burke's investigation into the circumstances surrounding the covid outbreak on the Teddy Roosevelt," Hoffman said.

On Wednesday a senior Navy official told CNN there were coronavirus cases on 26 US Navy warships, and another 14 have been hit by the virus but the crew members impacted have recovered.