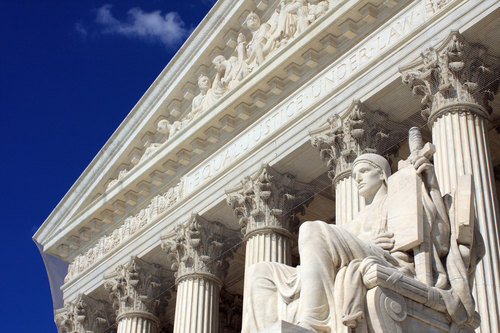 The Supreme Court will hear major cases on President Donald Trump's financial documents, religious freedom and the Electoral College via telephone next month...

The Supreme Court will hear major cases on President Donald Trump's financial documents, religious freedom and the Electoral College via telephone next month and make oral arguments available for live audio broadcast in an unprecedented move.

The announcement comes as the country is grappling with the coronavirus pandemic and it means that the justices will move into new territory, asking their questions over a phone line in lieu of the usual back and forth dialogue in their august courtroom.

'In keeping with public health guidance in response to Covid-19, the justices and counsel will all participate remotely,' the court said in a statement.

No justices will be in the courtroom and there will be no on-camera component, court spokeswoman Kathy Arberg confirmed.

Oral arguments will be heard on May 4-6 and May 11-13, but the specific dates for each case are yet to be determined, the court said.

The Supreme Court has long refused to allow live audio of its court sessions, allowing only about 500 spectators in the room to listen to the arguments as they unfold. Now, instead of waiting at times in long line outside the courtroom, hoping to get a coveted seat, the public will get a real time sense of the justices' thinking.

The cases involving Trump's financial documents involve whether the US House of Representatives and a New York prosecutor can subpoena the President's longtime accounting firm and banks for his records, two monumental disputes concerning separation of powers and Trump's broad claims of immunity.

The Electoral College case involves so-called faithless electors who voted or attempted to vote for candidates other than the ones who won their states -- Trump or Democratic nominee Hillary Clinton -- in the 2016 election.

Most states currently require some kind of a pledge from an elector to vote for the party's candidate who won the popular vote in the state. Overall, 10 of the 538 presidential electors in 2016 voted or attempted to vote for someone other than their pledged candidate.

In 2018, the Trump administration expanded those exemptions to cover other entities with sincere religious or moral objections. The new rules were immediately challenged by Pennsylvania and other states, as well as by the Little Sisters of the Poor religious order.

Roughly half of oral arguments the court was scheduled to hear in March and April will now be postponed until the fall term, lawyers for those cases were told Monday.

Those issues involve a copyright case between Google and Oracle and a case concerning the statute of limitations for rape in the military.

In addition to the oral arguments, the justices are still scheduled to release opinions for all the cases that have been argued so far this term. They include blockbuster issues concerning LGBT rights, abortion, the termination of the Deferred Action for Childhood Arrival program and the 2nd Amendment.

This story has been updated with details of the court's actions.