Linda Tripp, and the trailing damage of the Clinton affair 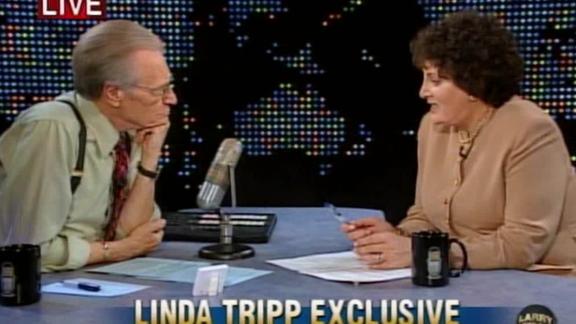 There is a man at the center of this story, but it is really about three women. One went on to become a US senator and run for president, twice, unsuccessfully. Another spent decades trying to hide, heal, reinvent and give back.

The third -- her name was Linda Tripp -- lived in relative obscurity. She died Wednesday.

She and the other two women, Hillary Clinton and Monica Lewinsky, were central figures in one of the biggest political scandals in modern American history, their lives, each of them, rearranged and upended by events that would define them forever -- notably in ways that the man in this story, former President Bill Clinton, has largely escaped.

For Hillary Clinton, her husband's affair with then-White House intern Lewinsky locked her into a steely defensiveness -- and an inconveniently anti-feminist position as she stood by him even as humiliating details emerged -- that she never could shake.

At the time, she joined other liberal apologists in defending Bill Clinton (Gloria Steinem was one defender) and also discrediting and shaming Lewinsky. Hillary Clinton allegedly called Lewinsky a 'narcissistic loony toon,' according to an entry in the diary of her close friend Diana Blair (it was released after Blair's death; asked to react to the disclosure at the time, Clinton's spokesperson said 'no comment').

Bill Clinton would ultimately be impeached -- and acquitted, in 1999 -- of charges related to his lying about the relationship. But even as recently as 2018, Hillary Clinton minimized the severity of her husband's obvious abuse of power, insisting that Lewinsky, 27 years his junior, had been 'an adult.'

The Clintons' reputation for cravenly ducking accountability was cemented at this moment in history and in the fallout. (Bill Clinton said in a 2020 documentary that the affair was to manage (his) anxieties' and said it was 'not a defense, it's an explanation. It was awful. I feel terrible.')

For Lewinsky, her life changed irrevocably at age 22, when her affair with her boss, the President of the United States, began. After the scandal broke, thanks in no small part to the third woman in this saga -- Lewinsky's work friend at the Pentagon public affairs office, Linda Tripp -- Lewinsky was not only subjected to the scrutiny of an independent counsel, political handlers, the media and the American public, but she was the subject of endless ridicule and mockery.

When the dust settled, she attempted a number of business ventures and media opportunities but escaping the Clinton cloud was near impossible. She has just within the past few years been able to reemerge as an advocate for those who are cyberbullied, and a public speaker whose voice, in light of the #MeToo movement, is finally getting the respect and recognition it deserves.

But for Linda Tripp, there was no coming back. In betraying her young friend's confidence, and secretly (and illegally) taping conversations with Lewinsky about her relationship with the President, Tripp was villainized worse than Bill himself.

From the brutal depictions of her looks to 'Saturday Night Live' impressions that lodged unkindly in the public consciousness, escape from infamy was impossible.

She was accused of trying to profit off of Lewinsky's pain, taping her conversations to secure a book deal. She lost her job, she accused the Justice and Defense Departments of leaking her employment records to the media (and was awarded $600,000 and three years' back pay to settle her lawsuit), and tried unsuccessfully to frame her role as protecting 'good government.' She eventually left DC and most recently helped her husband run a retail shop in Virginia.

Three women. The field of collateral damage and scattered detritus left by Bill Clinton's decisions is enormous still, even just for these three figures, for whom there are three complicated stories of survival.

For Hillary Clinton, there remain lingering questions about enabling. For Lewinsky, there is redemption, finally.

For Tripp, there was -- hopefully -- some peace.