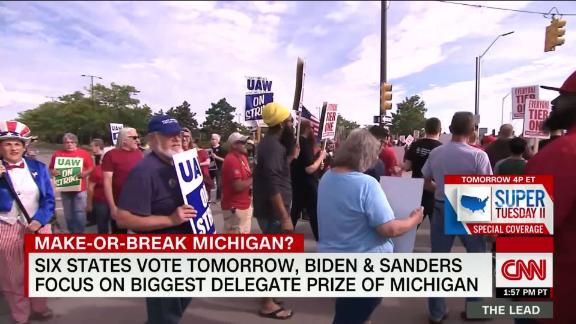 The one-on-one showdown between former Vice President Joe Biden and Vermont Sen. Bernie Sanders begins Tuesday with a test of the candidates' ability to win in the crucial general election battleground state of Michigan.

The state, along with Idaho, Mississippi, Missouri, North Dakota and Washington, all vote on the second Super Tuesday of the primary. Biden is expected to dominate in Mississippi, where African American voters make up the majority of the Democratic electorate, and is looking to perform well in Missouri. Sanders is aiming to keep the delegate race close, though, with wins out West.

But the biggest battleground is Michigan.

Four years ago, Sanders outperformed polls that showed him trailing Hillary Clinton by double digits there, delivering a stunning win that would prolong the Democratic presidential race. This time, it's Biden who is entering primary day with a double-digit edge in a spate of new polls.

If Biden wins, the race is scheduled to shift to a set of states that look even more favorable for him next Tuesday -- Arizona, Florida, Illinois and Ohio -- putting him in position to lock in a lead that would be all but impossible for Sanders to overcome. If Sanders wins, it would slow Biden's momentum and reset the race's narrative, suggesting Democrats are in for another drawn-out slugfest where every delegate matters.

Here are five things to watch in Tuesday's contests:

Biden looks for a knockout

If Biden can win Tuesday in Michigan, he'll undercut Sanders' central argument about his electability and leave his rival with very little time to correct course.

Biden knows it. He showed Monday that he's looking to land a knockout punch -- one that could be the beginning of the end of Sanders' campaign.

Biden rushed two former rivals, California Sen. Kamala Harris and New Jersey Sen. Cory Booker, to campaign with him in Michigan. He also campaigned with Gov. Gretchen Whitmer, who beat a Sanders-backed primary foe in 2018, and moderate female members of Congress who were part of the party's midterm wave.

After Tuesday, nearly half the Democratic pledged delegates will have been awarded. A week later, after contests in Arizona, Florida, Illinois and Ohio, that'll jump to 61%. They'll debate on CNN this Sunday night -- but otherwise, it's not clear how Sanders would slow Biden down.

Biden has the same advantages with African American voters that Clinton possessed four years ago. But exit polls from Super Tuesday show that he's built on Clinton's coalition by dominating with suburbanites who have flocked to the Democratic Party in the Trump era and by winning with non-college educated women. He's also closed the gap with Sanders among non-college educated men.

That rapid consolidation behind Biden was part of a 72-hour burst of momentum between his blowout primary win in South Carolina and victories on Super Tuesday. This Tuesday's primaries will test whether it has held.

Sanders isn't running away from the fact that his performance on Tuesday in Michigan could be his campaign's defining test.

Over the last week, he has repeatedly described it as "the most important state," and his itinerary, which was changed to include more time there at Mississippi's expense, backed up his words.

But the dynamics of the race have changed since late February, when Sanders was cruising down the primary's progressive lane and the moderates were backed up to his right. Then came South Carolina and the Biden surge. Massachusetts Sen. Elizabeth Warren dropped out last Thursday, but she has withheld her support and there is no indication -- regardless of her decision -- that her supporters should be counted on to rally behind Sanders.

It is difficult to look past the increasingly daunting poll numbers, but Sanders is fighting on and getting some late boosts -- first, from Rev. Jesse Jackson, the Civil Rights leader who endorsed him on Sunday morning. Jackson and New York Rep. Alexandria Ocasio-Cortez appeared with Sanders over the weekend. On Monday morning, Sanders got the backing of the progressive Working Families Party, which initially endorsed Warren.

On Sunday night, Sanders gave a more expansive speech than is his normal fare. He talked about Jackson and Ocasio-Cortez, both progressive lightning bolts of their times, and said that in having them at his side, at different events but on the same day, "We see the arc of justice that Dr. Martin Luther King Jr. talked about."

Jackson won in Michigan during his historic 1988 presidential run. Afterward, the Democratic Party establishment rallied around then-Massachusetts Gov. Michael Dukakis. Sanders, after his sweep of Nevada, could be staring down the same fate.

Can Sanders hurt Biden on trade?

Another reason Michigan is so crucial Tuesday is that it will test Democratic voters' views of free trade in a manufacturing state that's crucial in November's general election.

Sanders was successful in hammering Clinton over the North American Free Trade Agreement, enacted under former President Bill Clinton, in union-heavy, auto-industry-dependent Michigan in 2016. He's running the same playbook against Biden, blasting him for voting for NAFTA in TV ads and stump speeches.

But things have changed: Trump renegotiated the deal and rebranded it as the US-Mexico-Canada Agreement.

The Sanders campaign's working theory is that blue-collar voters aren't following their leadership on this issue and remain opposed to the trade deal. That theory proved true in Nevada on a different issue, when Culinary Union members largely caucused for him despite the union leadership opposing his Medicare for All plan.

If Sanders is right, and drastically outperforms the polls again in Michigan, it would quickly carve out his path forward: Through two more Midwestern manufacturing states, Illinois and Ohio, next week; then Wisconsin in early April; then Pennsylvania in late April.

If he's wrong, it would be an indicator that the issue isn't swaying the Democratic electorate away from Biden.

Even if he loses Michigan, Biden could end the day with more delegates than Sanders -- due in part to Mississippi.

The state possesses just 36 pledged delegates. That's far fewer than Michigan's 125, Washington's 89 and Missouri's 68. But the state's primary electorate is largely African American -- and Biden has won overwhelmingly with black voters in the south.

Sanders canceled plans to visit Jackson, Mississippi, over the weekend, instead focusing on Michigan -- a tacit acknowledgment that a Biden blowout there is all but certain. Mississippi is an insurance policy for the former vice president, giving him a delegate cushion even if Sanders surprises Biden elsewhere.

Sanders defeated Clinton in Washington state by more than 45 points in 2016. He won in Idaho by nearly 57.

This time around, things will be different -- by definition. Both states have ditched their caucuses in favor of a more straightforward primary voting process. The change is expected to hurt Sanders, even if he wins the states.

Caucuses were especially kind to Sanders in 2016, allowing him to rack up significant delegate tallies that primaries don't often allow. They are also more appealing, traditionally, to the most ideological and motivated voters.

Sanders' supporters are not as ideologically uniform as some believe, and caucuses can be a hassle for the working class voters he is after, but there is no questioning the dedication of much of Sanders' support. Fewer caucuses could, in the end, mean fewer delegates for the Vermont senator this time around.

Hi: 98° Lo: 61°
Feels Like: 75°
More Weather
July began on a seasonably hot note for northern California with plenty of sunshine, and fortunately very little wind. We'll have a minor cooling trend through Friday before more heat arrives for the holiday weekend.