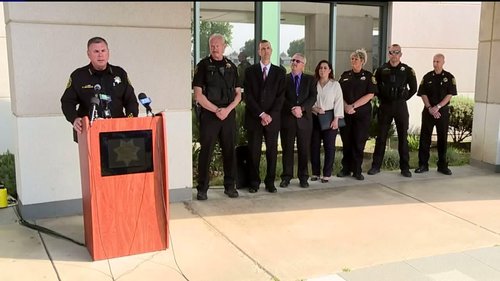 SAN JOAQUIN COUNTY, CA (KTXL) -- An urgent investigation is underway after bones had been recently found at the bottom of a San Joaquin County well.

Sheriff Patrick Withrow says his office is now working to determine whether these bones are human or animal — and if the gravesite is related to the notorious Speed Freak Killers who killed at least four people from 1984 to 1999.

“Cyndi was a very, very good friend, a very good person. She had a very great personality and everybody loved her,” researcher Tracy Meyers, whose friend Cyndi Vanderheiden was murdered, told FOX40.

Meyers is working on a documentary about the Speed Freak Killers -- Loren Herzog and Wesley Shermantine -- who killed at least four people between 1984 and 1999, including Vanderheiden.

Shermantine is currently on death row in San Quentin State Prison. Herzog died by suicide in 2012.

Now, a new clue could identify one more potential victim. Sheriff Withrow says bones found at the bottom of a San Joaquin County well were discovered by a farmer last month. Investigators would not say where the well is.

His office is now working to determine whether the remains are human or animal.

The sheriff says the bones are still at the bottom of that well and are now being monitored with surveillance cameras around the clock.

His deputies are working to determine the best way to identify and recover the remains.

“Our department has been through a situation like this before. I feel it was handled very badly, so do the families that were involved,” Withrow said.

Sheriff Withrow’s approach is a stark contrast to how Sheriff Steve Moore excavated remains back in 2012.

“That was completely awful and I have never, in the history of me looking at any other cases, have I ever seen a sheriff's office excavate a site with a backhoe,” Meyers said.

The sheriff says it will take at least a few weeks to get definitive answers.

Meyers says if the bone belongs to a victim of the Speed Freak Killers, she hopes it will bring the victim’s family some solace.

“Whatever family is involved that there is an open line of communication between the cold case team and the family members,” she said.

State Sen. Cathleen Galgiani believes the remains will be related to the case.

Galgiani is basing her assumption on eight years of communication with Shermantine.

Letters, maps and even death row visits with Shermantine at San Quentin have allowed the senator to assist in the investigation.

“Wesley drew maps and he wrote written letters describing the locations, and I am in the process of sharing that with the sheriff's department now,” the senator said. “He knows that I care about this deeply and that the other families are really hurting, and he wants to make sure that we have closure.”

Regardless of this outcome, Galgiani remains determined to keep searching for all the victims in the Speed Freak Killers case.

“I will never walk away from it until I have reason to believe that all of the locations have been pursued,” she said.

Hi: 94° Lo: 61°
Feels Like: 87°
More Weather
High clouds are streaming over northern California on this final day of the workweek, and light showers are trying to fall over the mountains. It is warmer today despite the clouds, and it's going to get much warmer soon.