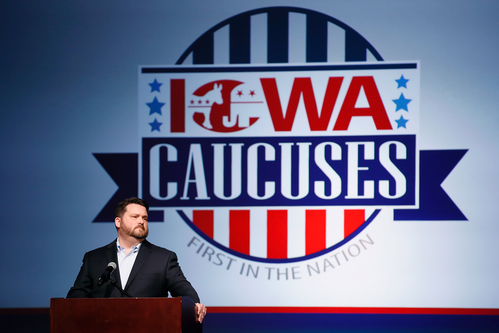 Iowa Democratic Party Chairman Troy Price resigned on Wednesday, according to a statement from the party.

"The fact is that Democrats deserved better than what happened on caucus night," he wrote in a letter to members of the State Central Committee. "As chair of this party, I am deeply sorry for what happened and bear the responsibility for any failures on behalf of the Iowa Democratic Party.

"While it is my desire to stay in this role and see this process through to completion, I do believe it is time for the Iowa Democratic Party to begin looking forward, and my presence in my current role makes that more difficult."

His resignation comes more than a week after the Iowa caucuses, marred by faulty technology and arcane rules, descended into chaos.

The state's treasured first-in-the-nation contest fell into turmoil as the reporting methods for the nearly 1,700 precincts broke down, halting the emergence of a clear winner and forcing a slow rollout of partial results. It took the party days to release the full count of votes and multiple campaigns highlighted errors in those counts after they were released, prompting the state party to agree to a partial recanvass of the results.

Pressure had been rising on Price to resign over the last week, but he told friends he intended to stay in his post until the recanvass was completed. But since that process was taking longer than expected, allies urged him to step aside now, to begin trying to restore credibility to the party.

"There was no way he could remain the face of the party," a senior Democratic official in Iowa said. "New leadership is the only way to try and move beyond this debacle."

Several state Democratic officials were urging him to step aside, people familiar with the matter told CNN, so a new leader could oversee the party's efforts in the general election campaign without hard feelings and controversy from the caucuses.

Two congressional seats that switched from Republican to Democratic in the 2018 elections and helped compose the Democratic majority in the House are a top priority as well as funding a campaign to challenge Sen. Joni Ernst, R-Iowa.

Price said in his letter he would be calling an emergency meeting of the State Central Committee Saturday to elect an interim chair who will oversee the completion of the recanvass and recount process "and begin the process of healing our party."

"Our paramount goal must remain to elect Democrats at all levels of office that will bring the voice of the people to our government," he said.

Price's decision to resign is likely welcome news to some Iowa Democratic Party officials and different Democratic campaigns who have assailed him throughout the disordered release of results and repeatedly questioning the transparency of the process.

In a call with Democratic campaign senior advisers after the caucus, Price sought to defend the process, arguing that the delay in reporting results stemmed from the party's desire to "ensure the integrity of the process."

But that did not quell concerns from a host of campaigns.

When Price began to say the delay was caused by a "reporting issue," Jeff Weaver, senior adviser to Bernie Sanders' campaign, called the excuse "bogus" and said, if true, "the whole process has been a fraud for 100 years."

Price went on to apologize for the delay in results, but stressed that "the raw data is secure."

"The reporting of the results and circumstances surrounding the 2020 Iowa Democratic Party caucuses were unacceptable," he said at a news conference Tuesday. "As chair of the party, I apologize deeply for this."

The Iowa Democratic Party said on Wednesday that they will begin their partial recanvass on Sunday and expect the process to last for two days.

Price ended his letter by stating, "With my decision, I hope the party can regain the trust of those we lost and turn our attention to what is most important -- winning in November."

This story has been updated with additional information on the Iowa caucuses.

Hi: 68° Lo: 47°
Feels Like: 44°
More Weather
A dry and warmer than average Presidents' Day and work week is expected as high pressure dominates our weather. High temperatures will make the mid to upper 60s and the next chance for rain isn't until next Sunday.