How to watch the Democratic debate tonight 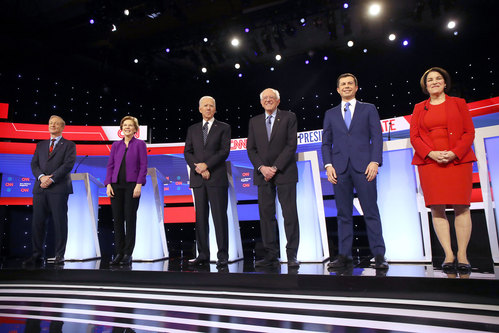 The 2020 Democratic presidential candidates will take the debate stage tonight in New Hampshire following the chaotic Iowa caucuses on Monday.

What time is the debate?

How can I watch it?

Get ready for the debate all day on CNN.com and stay with us for real-time news, analysis and fact-checking during and after the debate. CNN will have live TV programming breaking down the biggest moments and story lines from the debate after it concludes.

ABC's George Stephanopoulos, David Muir and Linsey Davis will moderate the debate. They will be joined by WMUR-TV's Adam Sexton and Monica Hernandez.

Who didn't make the cut?

How was the stage decided?

There were two pathways outlined by the DNC to qualify for the New Hampshire debate. Candidates could either qualify by winning at least one pledged delegate from the Iowa caucuses, or by meeting both a polling requirement and a grassroots fundraising requirement.

To meet the grassroots fundraising requirement, candidates had to submit a certification by 9 a.m. ET on Friday showing that the campaign received donations from at least 225,000 unique donors and a minimum of 1,000 unique donors per state in at least 20 US states. The qualifying donations had to be received by 11:59 p.m. ET on Thursday, February 6.

What happened at the last debate?

In a tense and dramatic exchange in the moments after the CNN/Des Moines Register debate in January, Warren accused Sanders of calling her a liar on national television. Sanders responded that it was Warren who called him a liar and said they should not talk about it right then.

Warren and Sanders were at odds over whether he told her, during a private dinner in 2018 about the presidential election, that a woman couldn't win. Neither backed off their previous statements during the debate.

There were some clashes on stage during the debate, but overall the four candidates who were at the top of the Iowa polls -- Biden, Buttigieg, Sanders and Warren -- had a generally careful approach.

The Iowa debate also brought the most substantive foreign policy debate of the Democratic race to date, with tensions flaring in the Middle East bringing the issue to the forefront.

A short, but direct, debate between Warren and Buttigieg on health care highlighted not only their key differences in the race, but how the two candidates are likely to go after each other in the coming months.

Hi: 96° Lo: 64°
Feels Like: 72°
More Weather
Today will be a fantastic day to get outside but this weekend we warm up rapidly with several triple digits days in a row next week.

Elderly couple stabbed in their home in Los Molinos

Vegetation fire in Palermo spreads to multiple nearby structures

The rental car industry has ground to a near halt. This is what that means for automakers and car buyers