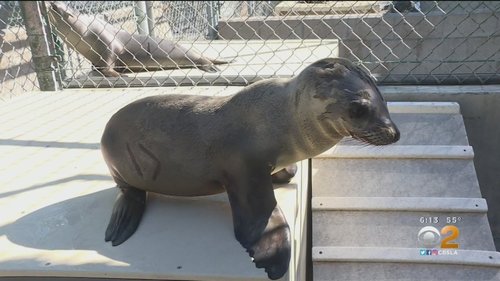 LONG BEACH, CA (KCBS/KCAL) -- A sea lion pup rescued after trying to cross the busy 710 Freeway in Long Beach was on the road to recovery Thursday night.

Last week, a driver called police after spotting the animal on the side of the freeway.

When officers with the California Highway Patrol arrived, the sea lion crawled under one of their cars.

The officers used a dog snare to get her out and placed her inside their patrol car until Long Beach Animal Control could pick her up and take her safely to the Marine Mammal Care Center in San Pedro.

“Every year we find a few animals that are very far out of habitat,” Lauren Palmer, a veterinarian at the center, said. “I don’t think she knew she was headed for the freeway, so she probably didn’t know where she was headed.”

The sea lion pup will work on gaining weight — she’s about 40 pounds underweight according to veterinarians — before being released back into the wild.

Hi: 67° Lo: 42°
Feels Like: 41°
More Weather
Clear skies have allowed for much cooler temperatures to start your Tuesday, but clouds will quickly increase through the day. Rain and snow will return to northern California this evening, and we'll get cooler on Wednesday. More rain and some high elevation snow will be ahead for the rest of this week and weekend. Models are keeping our region wet through at least the start of next week!