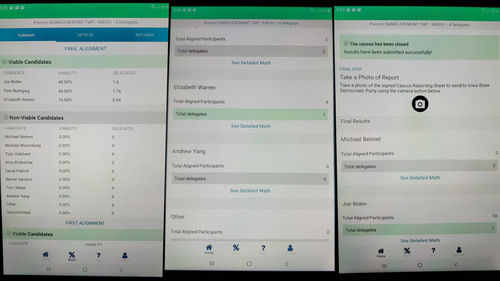 The app, built by Shadow Inc. last year, not by the Democratic National Committee, was updated three times ahead of Monday's caucuses, a caucus chair told CNN.

Although some caucus chairs used the app successfully Monday night, it is being blamed for the widespread issues that caused confusion and resulted in the first-in-the-nation voting contest concluding the night without a winner.

Shadow apologized for the issues Tuesday afternoon in a series of tweets.

How the app works

Precinct captains were given a six-digit PIN that they enter into the app, which identifies the precinct captain and allows them to input the results.

Kimberlea Burt Baker, a caucus chair in Fayette County, told CNN that users were required to know their precinct number and PIN to get past the login screen.

From there, the app prompted an 'outline or agenda,' said Baker, who oversaw caucuses in the Banks Township and Fremont Township.

Users were required to fill out the results in the app and at the end include a picture of the results.

'Take a photo of the signed Caucus Reporting Sheet to send to Iowa State Democratic Party using the campaign button below,' the app reads.

The app includes a summary of the 'final alignment,' showing all the Democratic candidates with their viability percent and number of delegates listed.

While some precincts officials told CNN that the software performed as needed, others experienced problems with the app and the reporting process.

One precinct chair in Iowa described the failure of the app to CNN, saying that the app got stuck on the very last step when reporting results, which was uploading a picture of the precinct's results.

The chair said they were finally able to upload the results and screenshotted what they uploaded. But the app showed different numbers than what they had submitted as captured in their screenshot.

Baker also told CNN that the only step that didn't work for her was including the photo with the results.

'I received an error every time I tried to take the picture,' said Baker, who submitted her results on the app without a photo.

For precinct officials who had trouble with the app, some also reported difficulties getting through on the phone to report results.

A Democratic source tells CNN that the issue seems to lie with a major coding error in the app that was discovered once data started flowing into the state party and officials began to see discrepancies in the three data streams as the results started coming.

The source said that it took time for party officials to identify the issue and try to address it, and noted there was not a problem with the raw data being put in by the individual precincts.

In a statement Monday night, the Iowa Democratic Party said the 'app did not go down and this is not a hack or an intrusion,' saying it was 'simply a reporting issue.'

The party said it found 'inconsistencies' in the reporting of 'three sets of results' and is using photos of results along with paper trails to validate the results.

As results were still unknown Tuesday morning, state party chair Troy Price sought to ensure that the data collected by the app was accurate.

'As part of our investigation, we determined with certainty that the underlying data collected via the app was sound. While the app was recording data accurately, it was reporting out only partial data,' Price said in a statement.

Price said they identified the problem as a 'coding issue' in the reporting system and have since fixed it.

'The application's reporting issue did not impact the ability of precinct chairs to report data accurately,' he added.

Hi: 78° Lo: 48°
Feels Like: 57°
More Weather
Much cooler with gusty winds and the potential for active weather this weekend.