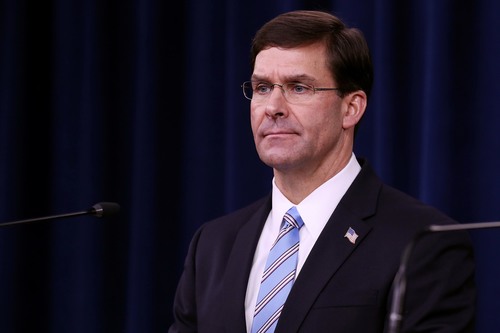 Defense Secretary Mark Esper on Sunday would not provide intelligence to back up President Donald Trump's claim that Iran's top military general was planning...

Defense Secretary Mark Esper on Sunday would not provide intelligence to back up President Donald Trump's claim that Iran's top military general was planning an attack on four embassies in the Middle East before he was killed by US forces.

'The President never said there was specific intelligence to four different embassies,' Esper told CNN's Jake Tapper on 'State of the Union.' But Esper said he shared the President's belief that the embassies were threatened by Qasem Soleimani.

'What the President said with regard to the four embassies is what I believe as well. He said that he believed that they probably, that they could have been targeting the embassies in the region,'Esper said.

In a separate interview that aired Sunday morning, Esper said he 'didn't see' a specific threat against four embassies in the intelligence.

'I didn't see one with regard to four embassies,' he told CBS' Margaret Brennan on 'Face the Nation.'

He also told CBS that the US had 'exquisite intelligence to an attack on the United States embassy in Baghdad' -- words he did not repeat regarding the concerns about the other embassies.

Pressed by Tapper on CNN's 'State of the Union' about the President's claim, Esper said, 'What the President said was, he believed it probably could have been. He didn't cite intelligence.'

He continued: 'I believe there were threats to more than -- to multiple embassies. That's -- that's why we reinforced embassies with additional troops.'

Esper's comments on Sunday follow Trump's claim in a Friday interview that Soleimani was targeting four embassies before he was killed, saying: 'I can reveal that I believe it would've been four embassies.' US forces killed Soleimani earlier this month in a drone strike that heightened tensions between Washington and Tehran.

But questions have continued to swirl about the intelligence the administration used to justify the strike, with lawmakers on both sides of the aisle raising concerns in recent days.

What the 'Gang of Eight' knows

Several Democratic lawmakers who attended a briefing last week from Esper and Secretary of State Mike Pompeo said that if the rationale for killing Soleimani were the threats Trump has shared, the two senior officials hadn't bothered to tell them.

'Let's be clear - if there was evidence of imminent attacks on four embassies, the Administration would have said so at our Wednesday briefing,' Sen. Chris Murphy, a Connecticut Democrat, said in a tweet. 'They didn't.' When asked about the intelligence, Democratic Sen. Tim Kaine of Virginia responded: 'That's news to me based on sitting through that hearing yesterday.'

Asked during his Sunday interviews about why the specific intelligence was only shared with the 'Gang of Eight,' a group of top congressional leaders who are generally privy to sensitive information that the rest of Congress is not always briefed on, Esper said it was because members of the group thought it shouldn't be more widely shared with Congress.

'I spoke to one of the briefers. One of the briefers told me was that most, nearly all of the members of that 'Gang of Eight,' believe that the intelligence was persuasive as well and that it should not be shared with the broader membership because the concerns that it could reveal our sources and methods,' he said on CNN.

The US military has deployed thousands of additional troops to the Middle East in recent days to help bolster the security of US personnel and facilities, including US embassies in Baghdad and Beirut.

This headline and story has been updated with additional developments Sunday.

Hi: 56° Lo: 44°
Feels Like: 48°
More Weather
Showers will continue overnight, and fog could be possible in some areas on Friday morning. Heavier rain and high elevation snow are on the way for your weekend.

Firefighters who died in Australia were on California tanker