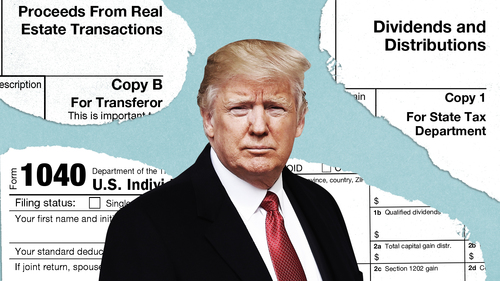 The Supreme Court said Friday it will consider whether the House and a New York prosecutor can subpoena President...

The Supreme Court said Friday it will consider whether the House and a New York prosecutor can subpoena President Donald Trump's longtime accounting firm and banks for his financial records, two monumental disputes concerning separation of powers and Trump's broad claims of immunity that will be decided in the heart of the presidential campaign.

In a brief order, the justices granted requests from Trump's personal lawyers to hear the cases, ensuring that the subpoenas won't be enforced while impeachment proceedings play out.

The cases will be heard in March, with rulings expected by June.

The Supreme Court's decision to hear the cases means that after years of Trump shielding his documents, the nine justices will make the final decision on whether the records should he released. The President's foes have sought his financial records citing a variety of investigations into hush money payments, foreign involvement in a US election, violations of the emoluments clauses and inquiries into potential violations of ethics rules.

How the court rules in the cases before them could have far-reaching implications, stretching well beyond the impeachment proceedings and the Trump era. In three cases that have made it to the Supreme Court, Trump has lost in the lower courts where judges have pointed out that other recent presidents have voluntarily disclosed their tax records.

It takes four justices to agree to take up a case, which on the nine-justice court does not mean they will ultimately rule in the President's favor. The court ultimately ruled unanimously against President Bill Clinton in a case arising out of a civil suit, as well as in a case relating to President Richard Nixon and the Watergate tapes.

"We are pleased that the Supreme Court granted review of the President's three pending cases," Trump's attorney Jay Sekulow said in a statement. "These cases raise significant constitutional issues. We look forward to presenting our written and oral arguments."

Friday's actions add three monumental cases to an already blockbuster Supreme Court term in the heat of the presidential election. Decisions in cases involving abortion access, immigration, the 2nd Amendment and LGBT rights are also expected by this summer.

Deutsche Bank and Capital One

One of the House subpoenas comes from the Intelligence and Financial Services Committee issued to Deutsche Bank and Capital One asking for a variety of documents from the President, his family, the Trump Organization and several affiliated entities.

The House says it needs the documents because committees are investigating issues such as whether the banks are complying with anti-money laundering and due diligence compliance programs. House lawyers point to reports revealing that "several Trump properties were purchased using anonymous shell companies funded by Russian oligarchs alleged to have previously engaged in money laundering."

In addition, the Intelligence Committee is investigating efforts by Russia and other foreign powers to influence the US political process "including potential leverage that foreign actors may have over President Trump, his family, and his business."

In court papers, Trump's attorneys say the subpoenas are "extraordinarily broad" and that they "target financial institutions that the President, his businesses, and his family used long before his election to office."

A federal appeals court allowed the subpoenas for most of the documents to go forward.

"Unquestionably, disclosure of the financial records sought by the Committees will subject [Trump's] private business affairs to the Committees' scrutiny," the 2nd US Circuit Court of Appeals ruled earlier this month, "however, inquiry into private affairs is not always beyond the investigative power of Congress."

Trump argues that the House exceeded its authority when it ordered the President's longtime accounting firm Mazars USA to turn over his personal records.

Lawyers for the House countered that the subpoena does not target the President, but a third party and that it was issued to further a valid legislative purpose to investigate a subject where Congress could enact legislation.

They say that Trump's choice to maintain his ties to a "broad array of business" ventures "raises questions about the adequacy of existing legislation concerning financial disclosures, government contracts with federal officeholders and government ethics."

In particular they cite a determination by the Office of Government Ethics in 2017 that the President had failed to disclose a payment made by Michael Cohen, the president's former personal lawyer, to a third party.

In 2019, Cohen appeared before the committee and testified that the President had "inflated his total assets" at some points and "deflated his assets" at other times.

A federal appeals court ruled against the President in October, holding that it detected "no inherent constitutional flaw in laws requiring presidents to publicly disclose certain financial information."

The Manhattan case arises out of a criminal investigation led by Manhattan District Attorney Cy Vance, who served a subpoena on Mazars USA as part of an investigation into the hush money payments to two women with whom the President allegedly had extra-marital affairs.

Trump has argued in this case that a president is immune from criminal investigations, but last month, the 2nd US Circuit Court of Appeals rejected Trump's attempt to block the subpoena.

"Presidential immunity does not bar a state grand jury from issuing a subpoena in aid of its investigation of potential crimes committed by persons within its jurisdiction, even if that investigation may in some way implicate the president," the appeals panel wrote.

This story is breaking and will be updated.