Black Friday kicks off with $4.2B Thanksgiving online shopping feast 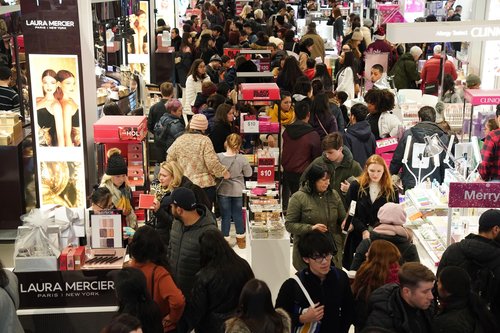 Americans with a hearty appetite for online deals pulled out their smartphones and, for the first time, shelled out more than $4 billion on Thanksgiving to k...

Americans with a hearty appetite for online deals pulled out their smartphones and, for the first time, shelled out more than $4 billion on Thanksgiving to kick off the holiday shopping season.

Thanksgiving Day's record online sales of $4.2 billion — about half of which occurred before the pumpkin pies even hit the table — set the stage for a busy Black Friday and potentially another blockbuster holiday season for retailers, according to Adobe Analytics data.

With Thanksgiving landing six days later than last year, retailers amped up their advertising and served up deep discounts on items such as appliances, sporting goods, televisions, consumers and toys, Woosley said.

And consumers ate up those deals.

Consumers spent $5.3 million per minute on online purchases during Black Friday, according to Adobe estimates.

'We're not seeing any slowdown in Black Friday' as a result of the big Thanksgiving turnout online, Woosley said.

As of 9 p.m. ET on Friday, online spending totaled $5.4 billion, putting Black Friday sales on pace to hit $7.6 billion, a 22.3% increase from last year, according to Adobe data. It would be the second-largest online sales day ever behind Cyber Monday 2018.

Adobe is projecting $9.4 billion in online sales for this coming Cyber Monday.

The most-popular items being tossed into the virtual carts included Frozen 2, NERF, and Paw Patrol toys; video games 'FIFA 20,' 'Madden 20,' and Nintendo Switch; and electronics including Air Fryers, AirPods and Samsung TVs, according to Adobe. The E-commerce giants dominated Thanksgiving Day sales, garnering a 244% increase in sales from last year as compared to smaller retailers, which recorded sales growth of 61%, according to Adobe.

Woosley estimates that consumers will spend $29 billion online between Thursday and Monday. That five-day 'Cyber Week' period should account for a 20% chunk of the $143.8 billion in online sales Adobe predicted for this holiday season.

The online deals also are expected to translate into sales at brick-and-mortar stores, Woosley said, noting an increase in 'BOPIS' — buy online, pick up in store — activity. About 82% of people who head to the store to pick up on online purchase will then continue their shopping in person, he said.

BOPIS has been one of the 'great retail stories of 2019' and retailers seem to have finally cracked the e-commerce code, said Joel Rampoldt, managing director in the retail practice of consulting firm AlixPartners.

'But it depends on how it's executed,' he said.

Driving the foot-traffic to stores and malls will be Millennials and Generation Z members, who see shopping as a socializing event, said Brent Schoenbaum, a partner at Deloitte & Touche.

According to Deloitte's annual pre-Thanksgiving survey of American shoppers, 82% of Generation Z shoppers (18-22 years old) and 60% of Millennial shoppers (23-38 years old) said they planned to shop with family and friends. That compares to 49% of Gen X, 41% of Baby Boomers and 50% of seniors surveyed.

But it's the original mallrats--Generation X--who will most likely to spend the most this weekend.

Generation X respondents (those aged 39-54) planned to spend $452 on average this weekend, with Millennial shoppers a close second with $446, followed by seniors at $406, then Baby Boomers at $370 and Generation Z at $335, according to the survey.

Retail sales at brick-and-mortar stores are expected to grow 2% in November and 6% in December, thanks to favorable weather and a 'year-end surge' in disposable income,' according to IBM, which utilizes artificial intelligence to analyze US Census and retail data.

'They're employed, [have a] good savings rate, and they've got a lot in their pocketbooks,' said Michael Haydock, IBM fellow and chief scientist.

Hi: 65° Lo: 46°
Feels Like: 63°
More Weather
Some showers are expected in your Monday forecast, but will mostly be in the northern end of the valley and mountains. Scattered mountain showers linger Tuesday, then dry and warmer weather takes hold for the middle of the week. Wet weather returns next weekend.

What you need to know: March 30