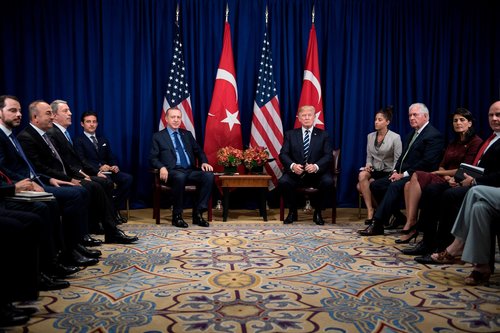 President Donald Trump emerged from hours of talks with...

President Donald Trump emerged from hours of talks with Recep Tayyip ErdoÄŸan on Wednesday to declare himself a 'big fan' of Turkey's strongman leader.

It was hardly the confrontation that some lawmakers were hoping for during the visit, which came as US-Turkey ties reach a low point amid disagreements over Syria and Ankara's purchase of a Russian missile system.

Trump, during an Oval Office meeting, repeatedly told ErdoÄŸan it was 'an honor' to host him and touted their friendship, despite broad bipartisan opposition to the visit in Congress and concerns about Turkey's incursion into Syria.

Trump hoped to clear the air with some of ErdoÄŸan's harshest congressional skeptics, inviting lawmakers such as Republican Sen. Lindsey Graham to the White House for an unusual meeting in the afternoon to discuss some of the stickiest issues.

But Trump concluded that meeting no less effusive in his praise of the autocrat, and continued repeating some of ErdoÄŸan's talking points.

'You're doing a fantastic job for the people of Turkey,' Trump said, adding later that ErdoÄŸan has a 'great relationship with the Kurds,' a group Turkey has deemed terrorists.

ErdoÄŸan's visit to the White House -- a month after Trump's withdrawal of US troops from Syria triggered a Turkish onslaught -- was already set to make waves before Democrats announced they would begin public impeachment hearings the same day.

That lent the hotly anticipated diplomatic encounter even more consequence as Trump navigated the start of the inquiry's public phase alongside a counterpart skilled in capitalizing on Trump's vulnerabilities.

As Trump sat with ErdoÄŸan for the White House talks, two senior US diplomats testified across town about the President's dealings with Ukraine. One, Ambassador Bill Taylor, said an aide of his overheard Trump ask on a July phone call about 'the investigations' he allegedly wanted Ukraine to open into the Bidens.

Trump insisted throughout the day he was paying no attention to the hearing, which revealed an explosive new detail putting him at the center of an alleged Ukraine pressure campaign.

A recurring theme in the impeachment interviews has been confusion and worry at Trump's chaotic foreign policy, and nowhere is that more evident than with ErdoÄŸan, who has appeared to bend Trump into making favorable pronouncements at multiple junctures.

Multiple witnesses have testified at the difficulty in scheduling a White House visit for Ukrainian President Volodymyr Zelensky.

ErdoÄŸan did not appeared to encounter similar difficulty. Even after lawmakers encouraged Trump to canceled his planned visit following the assault on Kurds, Trump kept the engagement on his calendar.

ErdoÄŸan isn't the only global strongman to have caught Trump's attention. The President touts his close friendship with China's Xi Jinping and has exchanged what he calls 'love letters' with North Korea's Kim Jong Un. He acknowledged as much in a speech on Tuesday.

'Anybody wants to come in -- dictators, it's OK. Come on in. Whatever's good for the United States; we want to help our people,' he said during a speech in New York.

But no leader has appeared to get what he wants from Trump quite like ErdoÄŸan.

The leaders' relationship had been under scrutiny since before an October phone call that abruptly led to Trump's announcement he was withdrawing US troops from northern Syria, green-lighting Turkey's long-planned invasion.

The President had previously announced he was withdrawing US troops from the country after an earlier phone call with ErdoÄŸan. That led to the resignation of his defense secretary and the senior US official overseeing the counter-ISIS coalition.

Trump, during the Oval Office meeting and later during the news conference, did not offer a condemnation of Turkey's incursion targeting America's Kurdish allies and did not bring up allegations of war crimes being committed by Turkish proxies.

'The ceasefire is holding very well, we've been speaking to the Kurds and they seem to be very satisfied,' Trump said. 'As you know, we pulled back our troops quite a while ago because I think it's time for us not to be worried about other people's borders. I want to worry about our borders, we've got plenty of borders to worry about.'

Later, at the news availability, Trump said a US-brokered ceasefire in northern Syria was 'complicated' but 'moving forward very rapidly.'

He said ErdoÄŸan assured him he would 'uphold what it's supposed to uphold.'

Trump wrote a letter to ErdoÄŸan last week offering a new trade deal and suggesting it was possible to avoid sanctions if the two countries can resolve some lingering disputes, including the purchase of the Russian missile system and the ceasefire in Syria, according to a senior administration official.

In exchange for the $100 billion trade agreement, Turkey would need to adhere to the October ceasefire in northern Syria the US helped negotiate, Trump wrote. He also wrote it was possible for Turkey to avoid sanctions, which are required by Congress after Turkey took delivery of the S-400 Russian air defense system.

Trump has delayed implementing those sanctions and administration officials say they are looking to see whether the S-400 system becomes operational before moving forward.

In his press conference, Trump said the Russian system posed a 'serious challenge,' but expressed optimism the two sides would resolve the matter.

Turkey has largely shrugged off the threat of US sanctions for the S-400, and none have yet materialized, angering some lawmakers. Members of Congress were similarly frustrated by Trump's move to pull US troops from Syria, which left America's Kurdish allies in the region open to Turkey's attacks. The House passed a package of sanctions on Turkey to punish the country for the invasion.

A bipartisan group of lawmakers wrote Trump this week asking him to call off the White House visit, though there was no indication he planned to cancel. And the No. 3 House Republican, Rep. Liz Cheney, called on the State Department to deny entry to the ErdoÄŸan bodyguards who were involved in an assault on protesters outside the Turkish ambassador's residence during a 2017 visit to Washington.

Hi: 60° Lo: 44°
Feels Like: 59°
More Weather
Isolated showers this morning and Tuesday. Dry weather the rest of the week with highs possibly above 70 by Friday.

People in Chico outraged by vandalism near former restaurant

Young athletes, a baseball coach and mothers. What we know about the others on board the helicopter crash that killed Kobe Bryant