Public impeachment hearings scheduled for this week: Here's what you need to know 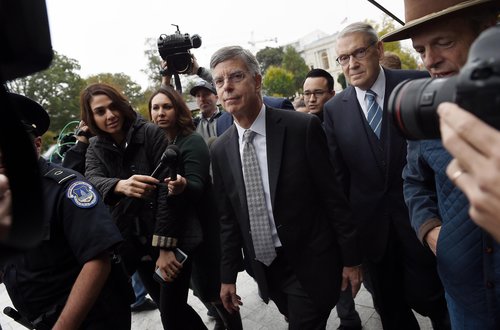 The House impeachment inquiry goes before live cameras this week...

The House impeachment inquiry goes before live cameras this week with two days of public hearings, following more than a month of the Democratic-led investigation and more than a dozen closed-door depositions.

The public got a preview of what key witnesses might say based on what they said behind closed doors with the release of eight transcripts last week, but the reach and impact when three of those officials testify live on Wednesday and Friday will add a new layer to the case for impeaching President Donald Trump.

Democratic leaders behind the probe have an aggressive schedule for the rest of year -- so much so that they're aiming for a vote to send the process over to the Senate before Christmas. Here's what Democrats plan to do between now and then.

In addition to the two days of public hearings scheduled for Wednesday and Friday, impeachment monitors can also expect the committee behind the probe to continue releasing this week transcripts from their closed-door depositions.

So far, the inquiry has released transcripts from:

That means, these witnesses' transcripts are still to come:

It's unclear if Monday's Veterans Day holiday -- which closes many federal offices until Tuesday -- will have an effect on the impeachment inquiry's plans for releasing the transcript or other developments.

The first two impeachment inquiry witnesses will testify together publicly on Wednesday at 10 a.m. ET: Kent, from the state department, and Taylor, the charge d'affaires at the US Embassy in Kiev.

Taylor's testimony behind-closed-doors was among the most significant so far in the investigation. His opening statement alone was considered an explosive document, in which Taylor corroborated many of the claims made by the intelligence community's whistleblower, whose complaint and subsequent inspector general's report prompted the inquiry. Taylor also provided witness testimony to the events around the temporary withholding of US military aid to Ukraine and the July 25 phone call between Trump and Ukrainian President Volodymyr Zelensky.

In Kent's testimony, he told lawmakers that Trump's personal lawyer Rudy Giuliani had a 'campaign of lies' against the former Ukraine ambassador Yovanovitch, according to a transcript of his comments released last week. Kent's deposition provided new insight into how Volker and Sondland worked with Giuliani on Ukraine, as well as the reactions inside the State Department to Giuliani's efforts that Kent and others say ran counter to US foreign policy.

Yovanovitch's public hearing Friday will close out another consequential week in the impeachment inquiry. It does not yet have a scheduled time, but it's expected to begin in the morning. Yovanovitch, who still works in the State Department, was ousted from her ambassadorship earlier this year because of what she testified were 'unfounded and false claims by people with clearly questionable motives,' a reference to the effort led by Giuliani and his associates to remove her. Yovanovitch told lawmakers she also pushed the State Department to speak up and defend her amid the attacks from Giuliani and his associates, but her requests went unanswered amid concerns about how Trump might respond, possibly by using Twitter.

CNN reported last Thursday that Democratic lawmakers expect at least one more week of public hearings following this week. Who could be the next public witnesses was not clear going into this weekend, so expect those hearings to be announced in the coming days. Also, if any of the seven remaining transcripts haven't been released this week, they would likely be released at this time.

While not exactly impeachment related, Congress also faces a deadline of November 21 to pass legislation to fund the government and avoid a shutdown. CNN reported last week that bipartisan congressional spending negotiators have reached a critical stage in the closed-door talks to take a potential shutdown off the table at least later this month.

Those discussions focused on a short-term measure -- typically referred to as a continuing resolution, or a resolution that continues funding at current levels -- until roughly mid-December, aides say. But that would be contingent on an agreement that kicks the funding process into gear. If that doesn't happen, then lawmakers will actively look to punt things beyond a potential Senate impeachment trial. So the short answer is people working on this don't believe there's near-term risk for a shutdown. Still, it's a factor lawmakers will consider over the next several weeks.

The rest of November

The House is scheduled to take a recess for Thanksgiving week, giving time for the House Intelligence Committee -- which, along with House Oversight and House Foreign Affairs, are leading the impeachment inquiry -- to finish a report detailing their findings and recommendations of their investigation.

Following the finishing of a committee report, the House Judiciary Committee would take the lead on the impeachment push -- potentially in the first week of December. Democratic sources expect that committee to have a public hearing, possibly in that week, before it votes on articles of impeachment. That vote could occur in committee in the first or second week of December, the sources said.

If that timeline is followed that would set up a full House vote to impeach Trump on the week of December 16 -- a historic vote that could come 21 years after President Bill Clinton was impeached by the House on December 19, 1998. That would send the process over to the Senate for a trial, where Majority Leader Mitch McConnell has kept much of his plans for the GOP-led chamber a mystery.

It's important to keep in mind that House Democrats are wary about specifying a timeframe and have left plenty of room -- at least in their public statements -- for that schedule to shift, amid such a politically charged and unpredictable process like impeachment.

'I'm not going to speculate on a timeline,' House Judiciary Chairman Jerry Nadler told CNN last week. 'We want to finish the process as expeditiously as possible and thoroughly ... that the American people see what the evidence is -- what the contradictory evidence is if any -- and if it's going to be done, it's got to be done right and whatever time required it takes.'

House Majority Leader Steny Hoyer told lawmakers this week they should expect to be in session the week of December 16. Hoyer cited the possible need to pass spending bills to avoid a government shutdown, but it's also possible the time will be used to take up impeachment.