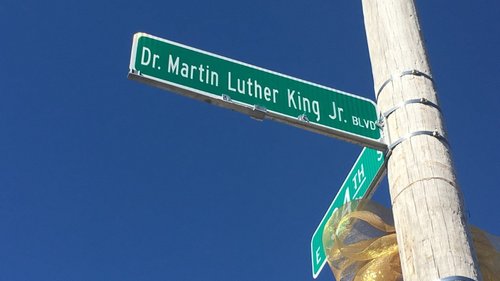 Voters in Missouri Tuesday decided to change the name of one of the most recognizable streets.

KANSAS CITY, MO (KSHB) -- Martin Luther King Jr. Boulevard signs started going up in February after the city council approved the name change in the beginning of the year.

On Tuesday, voters decided to change the street name back to The Paseo with nearly 70% of the vote.

In January, the Kansas City, Missouri, City Council voted 8-4 to rename The Paseo to Martin Luther King Jr. Blvd. It was an effort by the Southern Leadership Conference of Greater Kansas City.

The signs, which cost about $60,000 to put up, were placed along the nearly 10 mile stretch of road.

The city said in September that most of the new signs were up, except for highway signs that belong to MoDOT and two LED screen signs.

In May, a petition to reverse the change was certified and awaited City Council's vote.

In June, the City Council unanimously voted to put the street name change on the November ballot, after a citizen petition received more than the required 2,450 signatures.

Since June, both Save The Paseo and The Southern Leadership Conference of Greater Kansas City have been campaigning non-stop to raise awareness about the naming issue.

Hi: 50° Lo: 38°
Feels Like: 46°
More Weather
The fog tucked us in last night, leaving for some surreal driving conditions on the roads. We see the potential for a repeat situation this evening for the valley.