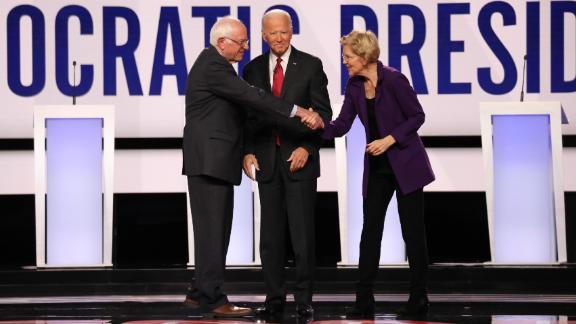 Sen. Bernie Sanders, former Vice President Joe Biden and Sen. Elizabeth Warren are the oldest candidates on the Democratic debate stage in Ohio. Hear what they had to say about about their age.

Twelve Democratic presidential candidates faced off Tuesday night on the same stage at the CNN/New York Times debate. Watch some of the biggest moments of the night here:

Buttigieg to O'Rourke: I don't need lessons from you

Former Rep. Beto O'Rourke of Texas and South Bend, Indiana, Mayor Pete Buttigieg sparred over O'Rourke's suggestion for a mandatory buyback of AR-15s and AK-47s, and the logistics behind that policy.

Sen. Amy Klobuchar of Minnesota went after front-runner Sen. Elizabeth Warren of Massachusetts for her support of the 'Medicare for All' single-payer health care plan.

'The difference between a plan and a pipe dream is something that you can actually get done,' Klobuchar said.

Warren became the main target in the race on Tuesday. In addition to attacks from Klobuchar, Warren was criticized by Buttigieg for refusing to give a yes-or-no answer to questions about the costs of the 'Medicare for All' health care plan.

Buttigieg and Rep. Tulsi Gabbard of Hawaii got into a heated exchange over Trump's decision to withdraw troops from Syria and how they would have handled the situation in the region.

What Warren, Biden and Sanders say about their ages

Sen. Bernie Sanders of Vermont, Biden and Warren were the oldest candidates on the stage. Hear what they had to say about their ages.

Warren takes a jab at Biden while complimenting Obama

Warren took a veiled jab at Biden after crediting former President Barack Obama with supporting the creation of the Consumer Financial Protection Bureau.

The candidates commented on the impeachment inquiry.

Here's how Yang says he flipped a Trump voter's support

Businessman Andrew Yang shared a story of how he was able to convince a Trump supporter to become a Yang supporter.

Billionaire Tom Steyer's response to call for no more billionaires

Hi: 61° Lo: 43°
Feels Like: 50°
More Weather
A winter storm will continue to drop rain & snow with thunderstorm chances through Monday. Next week we dry out and warm up with sunny skies and highs possibly reaching the 80s!