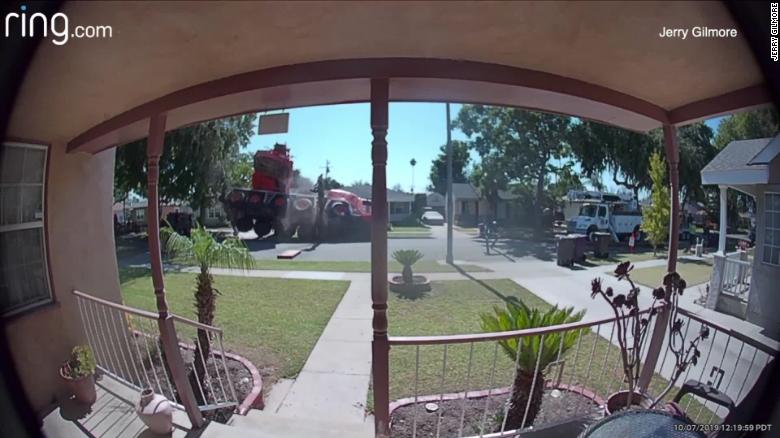 Ring doorbell video, provided to KTLA by Jerry Gilmore, shows the mobile crane parked in the 300 block of 61st Street just before 12:30 p.m. when the passenger side tires slowly begin to lift off the ground.

Several popping sounds can be heard as the truck falls onto its side and the crane comes crashing down on top of some nearby homes.

Gilmore said his wife called him to tell him about the incident when it happened. “It’s very scary because I live exactly across the street … it could have tilted the other way,” he said.

The injured person is a pastor who Gilmore said lives in the home across from his.

He said the pastor suffered some injuries but is expected to be OK.

A crew had been seen working on the power lines in the neighborhood for a couple of days before the crane collapsed, Gilmore said.

Southern California Edison, the utility providing power for the area, issued the following statement on Tuesday:

"Southern California Edison is aware of the incident yesterday in the Long Beach area involving an SCE contractor tasked with replacing a pole in the backyard of a residence. Our thoughts are with the resident who was reported injured in the incident. SCE is currently reviewing and investigating the circumstances surrounding this incident. The contractor operating the crane onsite was Bob Hill Crane."

61st Street was closed to traffic for several hours following the incident but residents were allowed to bring their vehicles back into the neighborhood Tuesday morning. “We’re trying to get back to normal,” Gilmore said.

At least two homes were damaged by the crane, but none appeared to be red-tagged.

The cause of the collapse is under investigation.

Hi: 75° Lo: 42°
Feels Like: 54°
More Weather
Areas of fog are possible to start your Tuesday, but we'll end up sunny, warmer, and have gusty north winds Tuesday afternoon. Winds will diminish through the day on Wednesday, and we'll stay very warm. Dry and warm conditions will persist through this weekend, but wet and cooler weather is projected to return next week.