McDonald's is bringing back Donut Sticks 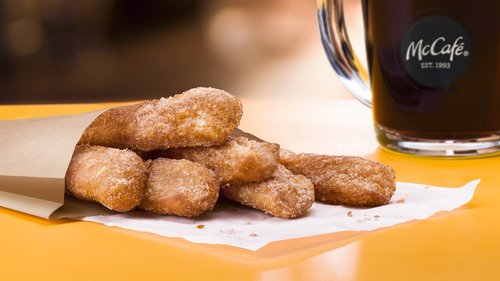 It's barely October, but McDonald's has already announced two new seasonal menu items for the holidays.The burger chain is bringing back its...

It's barely October, but McDonald's has already announced two new seasonal menu items for the holidays.

The burger chain is bringing back its popular Donut Sticks and introducing a cinnamon cookie latte, its first seasonal drink in five years. It's McDonald's answer to pumpkin spice.

Donut Sticks, fried dough rods that McDonald's added to its menu earlier this year, are returning November 6 and will be available for a limited time throughout the holiday season.

They will also only be sold during breakfast hours, which has become a battleground in the fast food sector.

Breakfast is a rare growth area for the industry, which has struggled to grow over the past several years. McDonald's competitors are scrambling to add breakfast items and improve their offerings: Panera says it has better coffee. Dunkin' added new breakfast bowls. And Wendy's announced that it's returning to the space after a several year hiatus.

The Donut Sticks come six or a dozen in a pack, and they will be served warm with cinnamon and sugar. This time, McDonald's is selling a new chocolate sauce to complement the sticks. The company said in a statement that the sauce was 'highly requested' by customers.

The Donut Sticks were a hit for McDonald's when they sold them earlier this year, and the company reported a strong first quarter earnings partly because of the new and limited time item.

The cinnamon cookie latte, also going on sale November 6, is part of its growing McCafé line of coffee beverages. It's a latte, which has steamed milk and a shot of espresso, topped with cinnamon. The drink is available hot or iced and costs $2 for a 12 ounce small. It is McDonald's first seasonal drink since 2014, when it started selling the white chocolate mocha latte.

One restaurant that isn't leaping into breakfast: Chipotle. CEO Brian Niccol told CNN's Chief Business Correspondent Christine Romans last week said he's open to the idea of serving breakfast across its stores, but is focusing his efforts on lunch and dinner.

'Our chorizo is fabulous,' he said.'You put chorizo with eggs in a burrito, that's pretty good. Right? So down the road maybe, but not right now.'

Hi: 98° Lo: 62°
Feels Like: 84°
More Weather
July began on a seasonably hot note for northern California with plenty of sunshine, and fortunately very little wind. We'll have a minor cooling trend through Friday before more heat arrives for the holiday weekend.