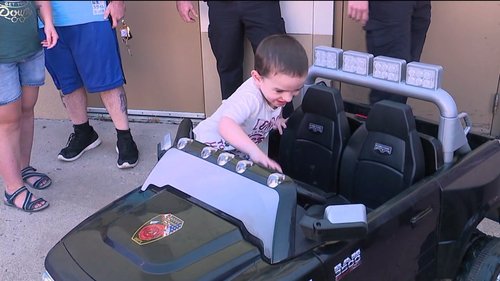 EXETER, Pa. (WNEP) -- Four-year-old Jasper Hudock could not wait to get back behind the wheel of his battery-operated, child-sized truck that was recovered by police in Exeter after it had been taken from the porch.

"He was a little bit more excited than I thought he was going to be," said Calynn Hudock, Jasper's mother. "I can't believe he tried to get in it when they didn't get it out the door yet."

Jasper received the truck as a gift from Hanover Township firefighters in December after they responded to a fire at his home. Jasper lost his father, step-mother, and step-sister in that fire and spent some time in the hospital afterward. He was given the truck after his release.

On Tuesday, Jasper's mother discovered it had been stolen from their porch in Exeter.

"I was upset. We were heartbroken. It means a lot to us," she said.

Calynn Hudock turned to Facebook for help, hoping to get the vehicle back to Jasper.

Police in Exeter tell Newswatch 16 after our story aired about the stolen truck, they received an anonymous tip call about it being in the woods a block and a half away from where it was taken.

"I was relieved. I was really relieved and extremely happy," added Hudock.

Before heading home, Jasper and the police officers took the truck for a test drive to make sure everything worked, even learning a thing or two about how to drive it.

"That makes us really happy because with the autism, the fact that he can learn, yeah, and I'm hoping he will succeed," said Hudock.

Jasper's family tells Newswatch 16 they are incredibly grateful for everyone who helped find the toy truck.

Police tell us no charges have been filed, but the case remains under investigation.