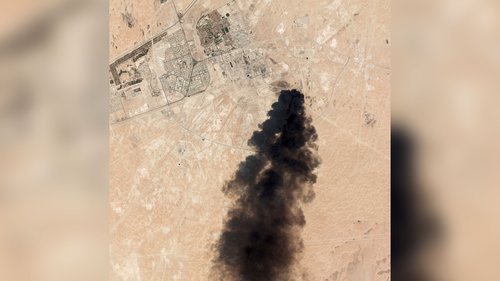 Happy Monday. A version of this story first appeared in CNN Business' Before the Bell newsletter. Not a subscriber? You can sign up right...

Happy Monday. A version of this story first appeared in CNN Business' Before the Bell newsletter. Not a subscriber? You can sign up right here.

Crude oil futures are trading at their highest levels since July after attacks on oil facilities in Saudi Arabia disrupted about half of the kingdom's production capacity, or more than 5% of the global supply of crude.

The market reaction was violent: US oil futures surged as much as 15% when trading opened, while the price of Brent crude, the international benchmark, spiked 20%.

Prices retreated slightly after US President Donald Trump said he had authorized the use of oil from the country's emergency reserve. In a series of tweets, Trump said that he had ordered that oil from the Strategic Petroleum Reserve, or SPR, be used "if needed."

Even so, US oil futures were trading near $60 per barrel during the European morning, a gain of nearly 9%. Brent crude, the global benchmark, was roughly 10% higher at $66 per barrel.

Extended pain: "This is a big deal," said Tom Kloza, chief oil analyst for the Oil Price Information Service. "It is the biggest shock to the oil markets since [Hurricane] Katrina. And like Katrina it will likely haunt us for months, at least weeks."

The Trump administration has blamed Iran for the attacks, and the president has suggested that the United States could take military action in response. Tehran has denied that it's responsible. The big risk for investors is that retaliation leads to further escalation.

"Controlling the pace of escalation is essential to President Trump, despite his need to take some action," said Matt Gertken, a geopolitical strategist at BCA Research.

Shares in oil producers moved higher on Monday, while airline stocks took a hit on fears the companies will soon be paying much more for jet fuel.

"In an environment of aviation overcapacity, particularly in European short haul as the sector continues to experience a flood of planes, and indications of corporate booking weakness raising warning signs for long-haul travel ... higher fuel prices are the last thing the sector needs," wrote analysts at Bernstein.

The loss of Saudi production will be hard to replace

The attack on Saudi Arabia wiped out 5.7 million barrels of daily crude production. Analysts say that commercial stocks will help fill the gap in the short-term, but the lost Saudi supply will be very hard for other countries to replace if the outage persists.

Iran has spare capacity, but US sanctions make it difficult for the country's crude to come to market. Venezuela, another potential source of additional supply, suffers from an oil industry in disarray. The United States, which briefly overtook Saudi Arabia as the world's top oil exporter earlier this year, can't ramp up production of its shale operations quickly enough to make much of a difference.

"There does seem to be this idea in the public's mind that shale can ramp up supply immediately, and that is simply not the case," said Bernadette Johnson at Enverus. US shale producers rely on hundreds of individual wells, and increasing production means new rigs, completions crews and infrastructure.

"The world is not even close to being able to replace more than 5 million [barrels per day] of Saudi Arabian exports. The market's reaction to Saudi Arabia's importance, in the new era of US shale, will now be put to the test," said Bjørnar Tonhaugen, head of oil market research at Rystad Energy.

The world will rely on commercial and national crude oil reserves while Saudi Arabia works to bring its supply back online. The Saudi government maintains significant reserves, as does China and the United States.

"The global flow of crude oil will not be disrupted immediately ... due to storage capacity at the main export terminals. However, the longer the processing facility remains disrupted, the larger the potential impact on actual crude flows will be," said Tonhaugen.

America has a huge stash of emergency oil. This is why

A quick history lesson: Three days before Christmas in 1975, President Gerald Ford signed a law creating the United States' first emergency stash of crude oil. The nation had been traumatized by an oil embargo a few years earlier.

At the time, OPEC had a stranglehold on the world's supply of crude. Today the United States is one of the world's largest producers and a major seller, not just a buyer, of oil.

But the United States still has its stash. The Strategic Petroleum Reserve (SPR) contains 645 million barrels — the world's largest backup oil supply. The reserves are stored in a complex of four sites along the Texas and Louisiana coasts that have deep underground storage caverns, 2,000 to 4,000 feet below the surface.

Only the US president can order the SPR to be used, and that has happened only three times.

The SPR was most recently used in June 2011 when civil unrest in Libya unsettled global oil exports. The US government, worried that supply disruptions would threaten a fragile global economy still recovering from the Great Recession, ordered the sale of 30 million barrels.

The SPR was also deployed in 2005 after Hurricane Katrina devastated the nation's oil infrastructure along the Gulf of Mexico. Its first use was in 1991 when the United States attacked Iraq in Operation Desert Storm.

SPR limitations: Any oil drawn from the SPR would not give an immediate boost to global supply. It has to be pulled out of storage and then sold into the marketplace of buyers and sellers, a process that could take about two weeks.

Investors will be following the latest developments out of Washington, Riyadh and Tehran.

Hi: 78° Lo: 55°
Feels Like: 66°
More Weather
Rain showers and a good chance for thunderstorms are on the way for your Friday night and Saturday forecast. We'll also be much cooler and have gusty South winds this weekend. Some showers are possible early next week, but dry and warmer weather returns for the middle of next week.