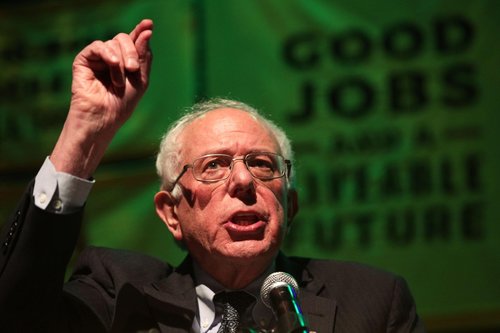 Sen. Bernie Sanders on Thursday added progressive meat to the bones of the Green New Deal with the release of his comprehensive $16.3 trillion climate change program ahead of a campaign stop in Paradise, California, the city leveled by a devastating 2018 wildfire.

Sen. Bernie Sanders on Thursday added progressive meat to the bones of the Green New Deal with the release of his comprehensive $16.3 trillion climate change program ahead of a campaign stop in Paradise, California, the city leveled by a devastating 2018 wildfire.

Sanders was an early backer of the activist-inspired Green New Deal framework and introduced, with Reps. Alexandria Ocasio-Cortez and Earl Blumenauer, a resolution in July to declare climate change a national emergency.

"Young people, advocates, tribes, cities and states all over this country have already begun this important work," the campaign says in its new pitch, "and we will continue to follow their lead."

The Sanders plan channels the rhetoric of the climate movement, calling for a World War II-style mobilization to halt and reverse the effects of global warming over a decade. In the process, the campaign claims, it would create 20 million new jobs in "steel and auto manufacturing, construction, energy efficiency retrofitting, coding and server farms, and renewable power plants." Sanders' blueprint will be compared to proposals put forward by Sen. Elizabeth Warren and Washington Gov. Jay Inslee, who released a robust suite of cross-sector plans before ending his campaign on Wednesday.

In a CNN poll from late April, 96% of potential Democratic voters said "aggressive action to slow the effects of climate change" was somewhat or very important -- the closest to a unanimous finding in the survey. The Democratic National Committee has so far not hosted a climate-specific debate, but 10 of the 2020 primary candidates will take part in a September 4 CNN town hall focused exclusively on the crisis.

During his time in office, President Donald Trump has rolled back dozens of environmental rules and regulations. Sanders in his plan promises to "aggressively enforce" the Clean Air Act, through the Environmental Protection Agency, to restrict dangerous emissions.

But the proposals unveiled Thursday go much further.

Sanders' prime targets include meeting the Intergovernmental Panel on Climate Change's goal of 100% renewable energy for electricity and transportation by 2030; cutting domestic emissions by 71% over that period; creating a $526 billion electric "smart grid;" investing $200 billion in the Green Climate Fund; and prioritizing what activists call a "just transition" for fossil fuel workers who would be dislocated during the transition.

The Vermont independent would also cut off billions in subsidies to fossil fuel companies and impose bans on extractive practices, including fracking and mountaintop coal mining, while halting the import and export of coal, oil and natural gas. Additionally, he would use his Justice Department and the Securities and Exchange Commission to pursue criminal and civil cases against energy companies that hid or withheld information -- over decades -- about the damage their businesses were doing to the environment.

Sanders in 2015 and 2016, during his first presidential campaign, memorably called climate change the foremost national security threat. In recent remarks on the campaign trail, he has promised to reassert US power internationally by taking a more assertive role in climate talks.

"Climate change cannot only be addressed by the United States. It is a global issue," Sanders said this week in Iowa. "But my promise to you is, instead of ignoring this issue as Trump does, I will help lead the world in bringing countries together to address the issue."

The proposal is the most in-depth to date from Sanders, who says it will "pay for itself over 15 years" and includes new details on the potential funding sources.

The most significant, at an estimated $6.4 trillion, would come from revenue generated by the sale of clean energy -- which will be administered by publicly owned utilities -- between 2023 and 2035. Before that, Sanders would cut military spending used to protect global energy interests by more than $1.2 trillion while hitting up fossil fuel companies for more than $3 trillion in "litigation (against polluters), fees, and taxes." An additional $2.3 trillion, the campaign says, would be raised from the taxes paid on the 20 million new jobs it promises to create.

Part of that money would go toward mitigating the damage already done by climate change -- with $162 billion set aside for coastal communities under threat and an additional $18 billion going toward firefighters to combat a spike in dangerous wildfires like the one in Paradise.

To deliver the political will for such a radical transformation, Sanders, as he has throughout his presidential campaigns, is counting on the youth-led activists and progressive movements that he has often inspired and, now, hopes to count on as a source of electoral strength.

Their continued vigor and ability to successfully pressure elected officials is written into the plan.

"We will do this," the campaign says, "by coming together in a truly inclusive movement that prioritizes young people, workers, indigenous peoples, communities of color, and other historically marginalized groups to take on the fossil fuel industry and other polluters to push this over the finish line and lead the globe in solving the climate crisis."

Hi: 77° Lo: 49°
Feels Like: 55°
More Weather
Clouds will linger tonight and temperatures will be mild for the start of your Friday. Sunny, dry, and warmer weather is ahead for your Friday and Easter Weekend.

Reports of shooting vandalism in Oroville followed by arrest