'Evil will not overcome us.' El Paso gathered for a public memorial to honor the shooting victims 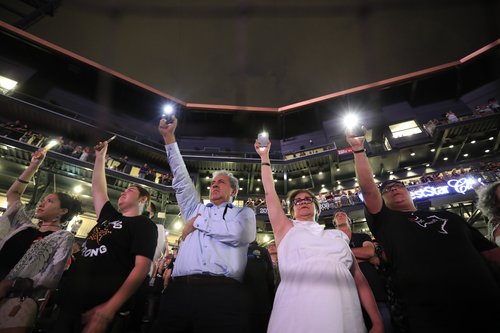 Hundreds of people packed into Southwest University Park baseball stadium in El Paso Wednesday night to remember the 22 people killed in an August 3 shooting at a Walmart.

"It is up to us not to let the world forget who they were," El Paso Mayor Dee Margo said. "They were grandparents, fundraising for their grandchildren's soccer league; mothers and fathers who cared for their children so much that they used their bodies as shields to protect them; families shopping on a normal Saturday morning; and a son who was getting ready to attend 10th grade at Horizon High School. They represent generations of El Pasoans and Mexicans that have lived in unison and harmony throughout our 350-year history."

The 21-year-old suspect in the shooting told police he targeted Mexicans when he walked into the El Paso Walmart and began firing. Twenty-four people were also wounded in the shooting, police said.

Religious and government leaders from both Texas and Mexico came together at the memorial to address the racism that came to El Paso that day and remember those who died because it.

Twenty-two stars lined with luminarias -- small paper lanterns -- were placed in the baseball diamond's infield, along with nine circles representing the victims of another mass shooting in Dayton, Ohio.

'Our values have no color'

"The event that brings us together represents the lowest, saddest expression of our times," Mexican Foreign Affairs Undersecretary for North America Jesús Seade told those gathered.

The memorial was an homage to the cultural diversity of the city, with speeches in both English and Spanish and bagpipes played alongside a mariachi band.

"Our values have no color, no race and no cultural division," Seade said. "Let us walk together toward a better world in which all minorities are equally respected."

Seade said it was his duty to condemn the attack on behalf of the Mexican government. He noted that while diversity and immigration have always been at the center of American prosperity, recent reports of hate crimes have been increasing.

In the wake of the attack El Paso attack, which killed eight Mexican nationals, Mexico's government said it considers the incident an act of terrorism against Mexican citizens.

Promising that the Mexican government would cooperate with the US to help determine if anyone else including white supremacy organizations were involved in the attack, Seade said he welcomed statements by the US federal government to condemn the attack as well as all anti-Hispanic rhetoric.

In prayers and in speeches, those representing Texas at the vigil also condemned the bigotry that motivated the attack and looked to understand how something so terrible could come to their community.

"As we gather tonight, we still cannot comprehend the evil that struck El Paso 11 days ago, the magnitude of the hate and racism, the sheer evil behind the act that took so many people," Texas Gov. Greg Abbott said.

"We may never fully understand the evil in this world or the hatred behind it, but here is what we do know: We know this evil will not overcome us," he added. "We will not allow our hearts to be hardened, and we will not allow hatred to stoke more hatred. Instead, we will conquer evil with goodness, and compassion and love for one another."

Lines of people have encircled blood banks to "share part of who they are" to help those in need, Abbott said, noting that the legacy of this tragedy will be the compassion that the community showed.

The evening was filled with mourning of those lost, with a series of pictures and a reading of the victims' names, but it was also a call to action.

Seade said that the Mexican government "will not rest until actions are taken so that this never repeats itself."

And Abbott said some of those actions are already underway.

"As a state we have already begun to act to keep Texas safe and to dismantle the purveyors of hate and racism in this state and in this country," he said.

And as a result of the attack, Abbott announced on Wednesday that he is forming a domestic terrorism task force to "combat hate-filled extremism and violence in the state of Texas."