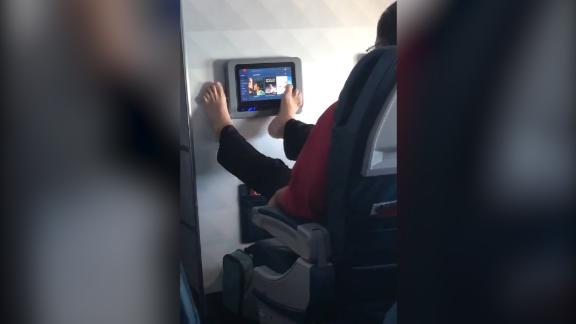 This video of a passenger operating his seatback TV with his bare feet has gone viral.

In an age when plane passengers are shamed almost daily on social media for inappropriate behavior, it takes a lot to shock fellow fliers.

So kudos to this unidentified man, who has managed to repulse millions of people by using his bare feet to operate his inflight entertainment screen while sitting in a bulkhead seat.

A video of the questionable act has racked up more than 9 million views on Twitter and attracted 5,000-plus comments since it was posted this week by a friend of the passenger who reportedly shot the footage.

Responding to concerns over the man's ability to use his hands, with some Twitter users pointing out that he could be disabled, the poster wrote that her friend confirmed she "saw him walk on and off the plane, carrying his own bag. He just likes to watch TV with his bare feet."

Bare feet are a common source of disgust among plane passengers, whether they're being placed on fellow fliers' arm rests or the wall of the bulkhead seats. Some passengers even make shoeless trips to the lavatory.

But this is the first time we've seen someone use their little piggies to operate an inflight entertainment system.

This week, the supermodel posted details of her flying habits on her YouTube channel, "Being Naomi."

Dressed for comfort in silk pajamas, she proceeds to rifle through her jam-packed Louis Vuitton travel bag and pull out a pair of disposable gloves along with Dettol anti-bacterial wipes.

"Clean anything that you could possibly touch," she says, before wiping down every inch of her seat, seat belt, tray table, TV screen, remote control and window. Even the overhead controls get a thorough clean.

"This is what I do on every plane I get on. I do not care what people think of me. It's my health and it makes me feel better."

With the image of that man's feet on the TV screen burned in our heads for eternity, we might just follow Campbell's lead.

Hi: 101° Lo: 63°
Feels Like: 78°
More Weather
We're finally seeing some relief from the heat on the way for your Friday. We'll be around 10 degrees cooler than Thursday on Friday and clouds will be returning for your afternoon. Much cooler with the chance for active weather on the way for your weekend.