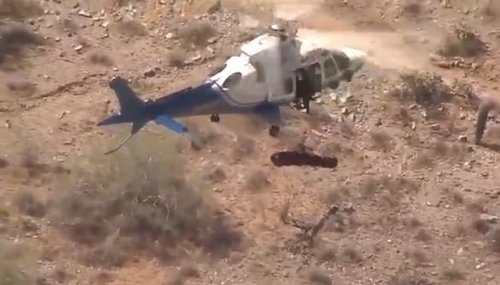 See video of the rescue in the player above.

Our Cliff Castle Chopper recorded as firefighters loaded a 74-year-old woman into a basket in preparation for flying her off Piestwa Peak.

"We do mountain rescues all of the time, but this particular one gathered quite a bit of attention because during the rescue, she was packaged on a hoist in a Stokes basket and she started to spin," Assistant Fire Chief Shelly Jamison said.

The basket and woman first swayed before starting to rotate. The rate of rotation accelerated as the crew on the helicopter brought the basket closer to the rotors.

"Sometimes when we bring the helicopter up from the ground, [the basket] will start to spin," said Paul Apolinar, chief pilot of the police department's aviation unit. "We have a line attached to the basket that's supposed to prevent that. Today it didn't."

Complicating the crew's efforts to stop the spin was the fact that the line intended to stop the basket from rotating broke at one point.

"They tried to stop some of the spin with the line that Paul was referring to, but that didn't work and it eventually broke," said Derek Geisel, who was piloting the helicopter during the rescue.

The spinning continued for about 40 seconds as the crew tried several times to raise and lower the basket.

"When they start to lower the load, [the basket] does actually start to stop," Geisel said. "And then we slowly brought it back up, it gets into the same downwash from the aircraft and it started to spin again."

"Once we got the forward flight, the spin got to the point where they were safely able to bring the patient up to the aircraft," Geisel said.

About a minute after the spinning began, it subsided and the basket was brought alongside the crew area of the helicopter, which landed at an ambulance.

"[The potential for the basket to spin] is something that's a known phenomenon in the hoist rescue industry," Apolinar, the chief pilot, said. "In the last six years, we've used a hoist 210 times on mountain rescues. In that time, we know of [a similar situation] happening twice."

Hi: 86° Lo: 50°
Feels Like: 52°
More Weather
Fire danger increases through Thursday thanks to warm, dry weather and strong winds. Next weekend we could see our first 90 degree day of the season.

No burning in Butte County allowed this Sunday until further notice