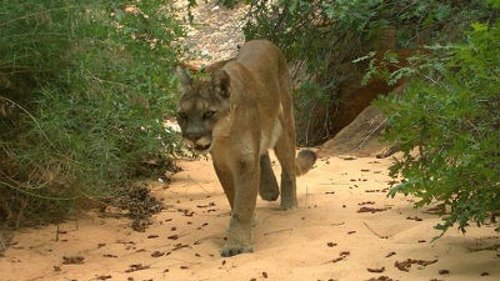 The incident happened Monday afternoon at around 2:30 p.m. just east of the waterfall, witnesses said.

Bystanders said the boy's father kicked the large cat -- which is believed to be a mountain lion -- and threw a rock to scare it away.

SDFRD officials said emergency responders rescued the boy near the middle of the canyon.

The boy was picked up by paramedics along Park Village Road and taken to the hospital. He suffered head injuries but was conscious when transported, according to witnesses.

"It's pretty spooky because we've known there's a big cat down here," said Katherine Weadock, who lives in the neighborhood.

Recently a neighbor's security camera had caught a mountain lion walking through a backyard and posted it to an online neighborhood forum.

"We've seen tons of deer down here so it's not unusual to have a mountain lion where there's deer, because that's their favorite food," Weadock said.

Hi: 88° Lo: 63°
Feels Like: 75°
More Weather
A few mountain showers are possible today with highs near 100 in the valley by Wednesday. We cool down again this weekend with a chance of showers.

Chico police searching for suspects responsible for arson at the UPD

What you need to know: June 1