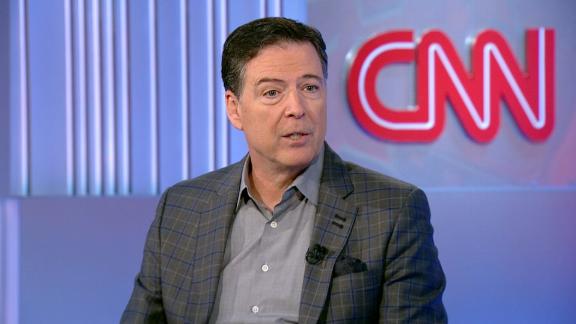 Former FBI Director James Comey defends remarks he made about unverified allegations contained in the Steele dossier and tells CNN's Anderson Cooper that it's possible Russians have leverage over President Donald Trump.

Former FBI Director James Comey said Thursday night on CNN that it appears President Donald Trump obstructed justice and that there is "no doubt" he would have been charged with crimes if he weren't the sitting president, which shields him from prosecution.

Comey also offered a blistering rebuke of Trump's appointees at the Justice Department and their handling of the Russia investigation. Attorney General William Barr and outgoing Deputy Attorney General Rod Rosenstein have ruined their reputations, Comey said, and don't have enough of a "strong character" to push back against Trump's more problematic instincts.

"It sure looks like he did, in connection with a couple of episodes," Comey said, referencing the 10 incidents of potential obstruction that Mueller examined. Comey cited the "flaming example" of Trump directing former White House counsel Don McGahn to fire Mueller in June 2017.

Comey said he agrees with the more than 800 former federal prosecutors who said this week, in an open letter, that Trump would have faced felony charges if he weren't the President. Comey went even further, saying that the Justice Department, in a future administration, "will have to take a serious look at" charging Trump after he leaves office and isn't protected from prosecution.

Trump and Comey have a famously tumultuous relationship. In a stunning move, Trump fired Comey as FBI director in May 2017, triggering the appointment of a special counsel. Trump has called Comey a "liar" and "leaker" and suggested that his actions were treasonous. Comey has bashed Trump as an stain on American democracy who is too immoral to be President.

"James Comey is a disgrace to the FBI & will go down as the worst Director in its long and once proud history," Trump said on Twitter. "He brought the FBI down, almost all Republicans & Democrats thought he should be FIRED, but the FBI will regain greatness because of the great men & women who work there!"

Comey, who said last month that Barr "deserves the benefit of the doubt" regarding the report, said Thursday that the attorney general ultimately "acted in a way that's less than honorable" with his public rollout of the Mueller report. In a four-page letter to Congress and a nationally televised news conference, Barr twisted Mueller's findings and cherry-picked quotes from the report, according to a CNN analysis.

The attorney general "certainly gave misleading testimony" to Congress about his interactions with Mueller, Comey said, but there isn't strong evidence that Barr committed perjury.

"He's an accomplished and very smart person and who had nothing to lose in taking this job. But his reputation -- it doesn't make me happy to say this, but I think he has lost most of his reputation with the way he has conducted himself," Comey said.

Echoing a talking point from prominent Democrats, Comey said Barr "continues to talk as if he's the President's lawyer." Comey also said Rosenstein was "very bright, but not strong enough."

"I think people like that, like Rod Rosenstein, who are people of accomplishment but not real sterling character, strong character, find themselves trapped," Comey said, blasting his former colleague in the federal law enforcement community. "And then they start telling themselves a story to justify their being trapped, which is, yeah, he's awful, but the country needs me."

The former FBI director also said it is possible the Russians have leverage over Trump. The allegation first emerged from a controversial dossier written by a retired British spy, which alleged a vast conspiracy of collusion between the Trump campaign and the Kremlin.

Comey refused to back away from past speculation that compromising tapes of Trump exist from his visit to Russia in 2013 for the Miss Universe pageant, which he owned at the time.

"I don't know whether it's true or not," Comey said.

"Again, Mueller didn't say it wasn't the case. He didn't disprove it, but he also didn't establish that it was the case."

The Mueller report references "tapes" in an obscure footnote, Comey pointed out. The footnote says Trump's former attorney Michael Cohen was tipped off in October 2016 by a Russian associate that there could be "tapes" of Trump.

"Stopped flow of tapes from Russia but not sure if there's anything else. Just so you know ... ," Russian businessman Giorgi Rtskhiladze said in a text message to Cohen before the election

But Rtskhiladze later told investigators that he heard the tapes were fake. Nothing in the Mueller report confirmed the allegations that the Russians have compromising tapes of Trump.

Comey said Mueller should testify before Congress so he can "explain his thinking."

He said he believes Mueller's thinking on the obstruction question was, "Look, we can't indict (Trump) anyway. We've got lots of evidence of obstruction of justice. We're compiling it for a future prosecutor, so why engage in a really long battle over forcing him to give us answers?"

House Democrats hoped to bring Mueller to Capitol Hill on May 15 for a public hearing, which would surely draw international attention. But the plans are still in flux, and House Judiciary Chairman Jerry Nadler said earlier on Thursday that it's unlikely that schedule will hold.

Comey wrote in a recent op-ed that Trump appointees, like Barr and others, sometimes make "compromises" to survive their boss, writing, "Trump eats your soul in small bites." At the CNN town hall on Thursday night, Comey said that "it doesn't make me happy to write that, but it's what I believe. This President, because he's an amoral leader, shapes those around him."

The former FBI director also reiterated that he believes Trump should be defeated at the ballot box, not by impeachment. Comey was a lifelong Republican but now identifies as an independent and canvassed for a Democratic congressional candidate in the 2018 midterm elections.

Comey said he would "never" run for office, but that he would work to elect Democrats in the upcoming election and defeat Trump in 2020 "because he is amoral, unfit to lead this nation."