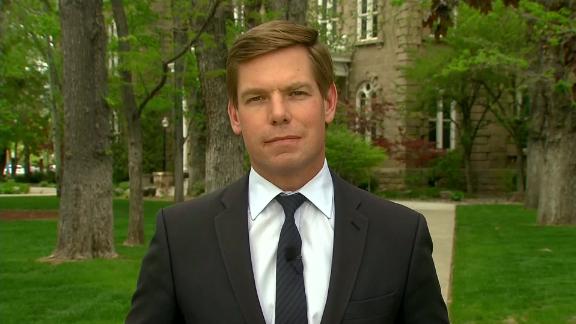 House Judiciary Chairman Jerry Nadler is moving forward Wednesday with a vote to hold Attorney General William Barr in contempt of Congress in the face of a threat from the Justice Department that President Donald Trump will declare executive privilege over special counsel Robert Mueller's report and its underlying evidence.

Barr would be the first Trump administration official held in contempt by the Democratic-led House, which has repeatedly clashed with the White House over its investigations into Trump, his administration and his businesses.

Following a day's worth of negotiations and offers traded back and forth between committee staff and Justice Department officials, the department late Tuesday threatened to ask Trump to invoke executive privilege over the unredacted Mueller report and evidence if the contempt vote moves forward.

'In the face of the Committee's threatened contempt vote, the Attorney General will be compelled to request that the President invoke executive privilege with respect to the materials subject to the subpoena,' wrote Assistant Attorney Stephen Boyd.

Nadler responded by saying the vote would be moving forward, accusing the Justice Department of a 'last-minute outburst' and urging negotiations over the Mueller report to continue.

'The Department's decision reflects President Trump's blanket defiance of Congress's constitutionally mandated duties,' Nadler said in a statement. 'In the coming days, I expect that Congress will have no choice but to confront the behavior of this lawless Administration. The Committee will also take a hard look at the officials who are enabling this cover up.'

On CNN's 'New Day' Wednesday morning, Nadler said that the United States is in a 'constitutional crisis.'

He added, 'We are in one because the President is disobeying the law, is refusing all information to Congress.'

If the contempt resolution is approved, it would move to a vote in the full House.

The decision to hold Barr in contempt signifies the anger simmering from Democrats over what they see as across-the-board stonewalling of their oversight of the Trump administration. They have had subpoenas blocked by the administration, witnesses decline to testify, lawsuits filed by the President to block their subpoenas and earlier this week the Treasury Department rejected a request for the President's tax returns.

Practically, holding Barr in contempt is unlikely to change the landscape on the ground -- Republicans used the same maneuver against President Barack Obama's attorney general, Eric Holder -- but it is laying the groundwork for the brewing, multi-pronged court battle between the Trump administration and congressional Democrats.

At a closed-door meeting Tuesday evening, Nadler informed Democratic leaders that he was prepared to hold the contempt vote for Barr unless the Justice Department agreed to his latest set of demands, according to a source in the room.

The Justice Department offered on Tuesday to allow more staffers to view a less-redacted version of the Mueller report that was made available to select congressional leaders, to allow Congress to take their notes from the secure room after reviewing the report and to talk about it among those who had viewed it, according to the Justice Department's letter sent Tuesday evening.

But that didn't hit at the heart of the dispute over the Mueller report, which comes down to two key issues: the grand jury material and Mueller's evidence.

Democrats in their counteroffer requested that the Justice Department commit to work with the committee to go to court to obtain the grand jury material — or at least not oppose the committee's effort to do so, according to a committee spokesman. They also requested a meeting this week to discuss providing the committee access to Mueller's evidence and that the full membership of the Judiciary and Intelligence Committees should be able to view the less-redacted report.

The Mueller report released publicly had approximately 8% of the material redacted, according to a CNN analysis, and the Justice Department offered congressional leaders the opportunity to see a less-redacted version -- with only grand jury material removed, an even smaller percentage. Barr has argued he's not legally allowed to provide grand jury material to Congress.

But Democrats have rejected the Justice Department offer to view a less-redacted report, arguing they are entitled to grand jury material, and Nadler has urged Barr to join him in seeking a court order to release it. Democrats have said they need Mueller's evidence, specifically citing in a letter last week the FBI's witness interviews and contemporaneous notes that witnesses provided to the special counsel's team, which are cited throughout the report.

Republicans have slammed Democrats for moving to hold Barr in contempt, accusing Democrats of targeting the attorney general because he won't violate the law.

'This afternoon, the Justice Department delivered the latest in a succession of accommodations responding to Democrats' demands, and the department's endurance is admirable,' Georgia Rep. Doug Collins, the top Republican on the committee, said in a statement Tuesday. 'Chairman Nadler, however, rebuffed the olive branch and plowed ahead with his plan to hold Attorney General Barr in contempt for upholding the law. I can't imagine a more illogical hill for a legislator to die on.'