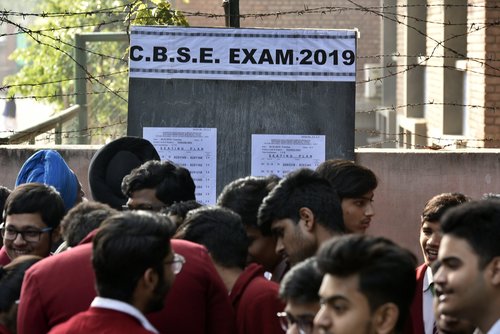 Nineteen students have taken their own lives in the Indian state of Telangana since mid-April, after the release of intermediate examination results, officia...

Nineteen students have taken their own lives in the Indian state of Telangana since mid-April, after the release of intermediate examination results, officials say.

The state examination for 12th-graders has come under scrutiny. Hundreds of parents have protested the marking and evaluation of the test papers, which they say have resulted in students being awarded incorrect marks and, in many cases, failing the exams. Most university admissions are based on the examination.

Some students have said that they appeared for exams but were marked absent or that they were awarded zero marks in specific subjects that they completed.

Parents have blamed both the state Board of Intermediate Education, which is responsible for the examinations and their evaluation, and the Telangana government. The board contracted the evaluation of mark sheets to an outside firm, Globarena, which could not be reached for comment.

"It is all unfortunate. People should not resort to such kind of extreme steps. Mistakes have happened at some level. That can be checked and rectified," said Jitender, a senior state police official who goes only by his first name.

Experts have criticized India's education system as a poor one in which students are under heavy pressure not just to pass examinations but to exceed expectations at all costs.

Thousands of Indian young people die by suicide every year, according to the National Crime Record Bureau. In 2015, they made up 6.7% of all suicides, totaling to almost 9,000 deaths. Some experts, parents and officials blame the pressure to succeed in school.

In 2015, photographs of family members scaling school buildings and clinging to window ledges to pass cheat sheets to 10th-graders in the state of Bihar went viral.

The Telangana state government has repeatedly asked parents to file complaints with the education board if discrepancies are suspected in the exam results. In the event that a discrepancy is found, the results will be rectified, officials say.

However, two or three suicides have been reported every day in Telangana since the announcement of the results on April 18, Jitender says.

"We are definitely trying to create an awareness, but still, all these people are spread over a large area. ... Our appeal will have limited access," he said.

Hi: 96° Lo: 61°
Feels Like: 93°
More Weather
We'll be staying hot on Friday, but won't be as hot as the last few days. The potential for active weather returns Friday night into Saturday and much cooler temperatures are on the way for your weekend.