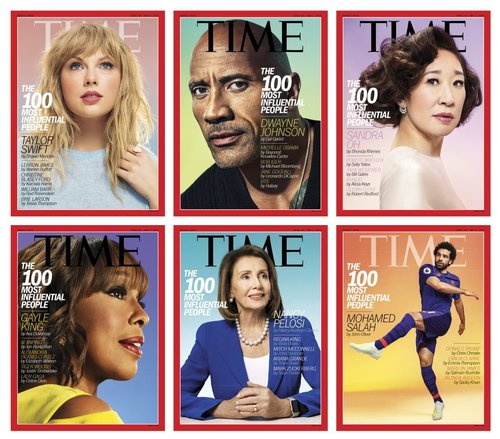 An Egyptian soccer hero and a sporting legend who just...

An Egyptian soccer hero and a sporting legend who just completed an improbable comeback. The first woman to be speaker of the house and the youngest woman elected to Congress. Special Counsel Robert Mueller and President Donald Trump.

Those are just some of the individuals selected for this year's edition of Time 100, the magazine's annual list of the most influential people in the world.

It marks the 16th year for Time 100, and the first under the magazine's new owners, Marc and Lynne Benioff. Time's new owners announced earlier this month that there will be a day-long conference in New York City on the same day as its annual Time 100 gala, where honorees gather. This year's events take place on April 23 hours before the nighttime gala.

"This is what you'll be seeing from us throughout the year -- expanding existing franchises and building out new ones," Time editor in chief and CEO Edward Felsenthal told CNN Business earlier this month.

As in previous years, Time assigned a number of marquee names to write about the 100 people who cracked the 2019 list.

Hillary Clinton wrote about Nancy Pelosi, who became the first woman elected as House Speaker in 2007 and returned to the post in January.

Clinton said Pelosi "is living proof that when it comes to getting the job done, more often than not, it takes a woman." Tiger Woods, fresh off his enthralling triumph at The Masters, was feted by Justin Timberlake, who praised the legendary golfer for spending "countless hours in the weight room, and on the golf course, with a singular goal in mind."

And former New Jersey Governor Chris Christie was tasked with writing about Trump.

"The President's supreme confidence in his own ability to persuade others to make a deal is now the basis for American denuclearization policy toward North Korea," Christie wrote. "President Trump deserves great credit for daring to try to personally persuade Chairman Kim to join the family of nations. This approach holds the possibility for history-making changes on the Korean Peninsula to make us all safe."

The comedian John Oliver wrote about Mohamed Salah, the Egyptian soccer star who has taken Liverpool to the brink of English and European glory, while Warren Buffett was assigned to write about LeBron James.

For James and Woods, this year is their fourth and third time on the list, respectively. Trump and Pelosi have each been selected to Time 100 four times.

The list is always comprised of an eclectic mix of entertainers, athletes, moguls and media personalities. And there is never a shortage of political heavy hitters.

Elizabeth Warren, the senator from Massachusetts and a 2020 presidential hopeful, wrote about Representative Alexandria Ocasio-Cortez, the progressive upstart that Time dubbed as the "second most talked-about politician in America" just last month.

"A year ago, she was taking orders across a bar," Warren wrote of Ocasio-Cortez, who at 29 became the youngest woman ever elected to Congress. "Today, millions are taking cues from her. She reminds all of us that even while greed and corruption slow our progress, even while armies of lobbyists swarm Washington, in our democracy, true power still rests with the people. And she's just getting started."

Six of those who made the list will also get their own covers. Salah and Pelosi each get one, along with singer-songwriter Taylor Swift, actors Sandra Oh and Dwayne Johnson and CBS This Morning co-host Gayle King.

King has scored a number of news-making interviews in recent months, including exclusives with R. Kelly, Virginia Democratic Governor Ralph Northam and the filmmakers and accusers of "Leaving Neverland," the controversial Michael Jackson documentary that premiered on HBO earlier this year.

Hi: 73° Lo: 42°
Feels Like: 70°
More Weather
The rest of the week will see nice weather. Wet weather returns for your weekend and into next week with the chance for moderate to heavy snow in the mountains.