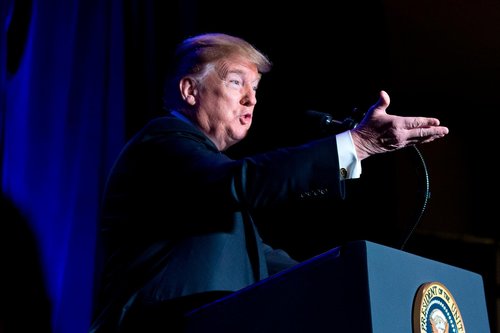 Only 3-in-10 Americans said President Donald Trump should declare a national emergency in order to build a wall along the border with Mexico, according to a...

Only 3-in-10 Americans said President Donald Trump should declare a national emergency in order to build a wall along the border with Mexico, according to a CNN poll conducted by SSRS in early February.

On Friday, Trump declared a national emergency after signing a spending bill compromising on border security that will keep the government open. The bill doesn't include the full amount of money he asked for for a wall. He is exercising his executive powers to declare a national emergency, sparking a national debate on his decision and continuing the fight over the border.

CNN's poll isn't the only one to reflect an opposition to the president's use of a national emergency. Five other polls taken in January showed around one-third support and two-thirds opposition for executive action, including two from Quinnipiac University, one from Monmouth University, one from Fox News, and one from ABC/Washington Post. Some of these polls are conducted among registered voters, not just all American adults, but results remain relatively consistent.

There's a chance his party could solidify around him, as not much Trump does has impacted his approval rating in the past.

Most Americans will be happy that the government isn't shutting down again, 57% opposed another partial government shutdown in the case that no agreement was reached.

More than half oppose building a wall along the entire border with Mexico (56%), according to CNN's poll from January. That is the lowest opposition to the wall since 2016, but it has always been a majority of Americans since CNN began polling the issue. Eight-in-10 Republicans support building a wall, 39% of independents, and 8% of Democrats.

The CNN Poll was conducted by SSRS January 30 through February 2 among a random national sample of 1,011 adults reached on landlines or cellphones by a live interviewer. Results for the full sample have a margin of sampling error of plus or minus 3.8 percentage points, it is larger for subgroups.

Hi: 78° Lo: 55°
Feels Like: 66°
More Weather
Rain showers and a good chance for thunderstorms are on the way for your Friday night and Saturday forecast. We'll also be much cooler and have gusty South winds this weekend. Some showers are possible early next week, but dry and warmer weather returns for the middle of next week.