The eviction ban is ending, putting millions at risk of losing their homes 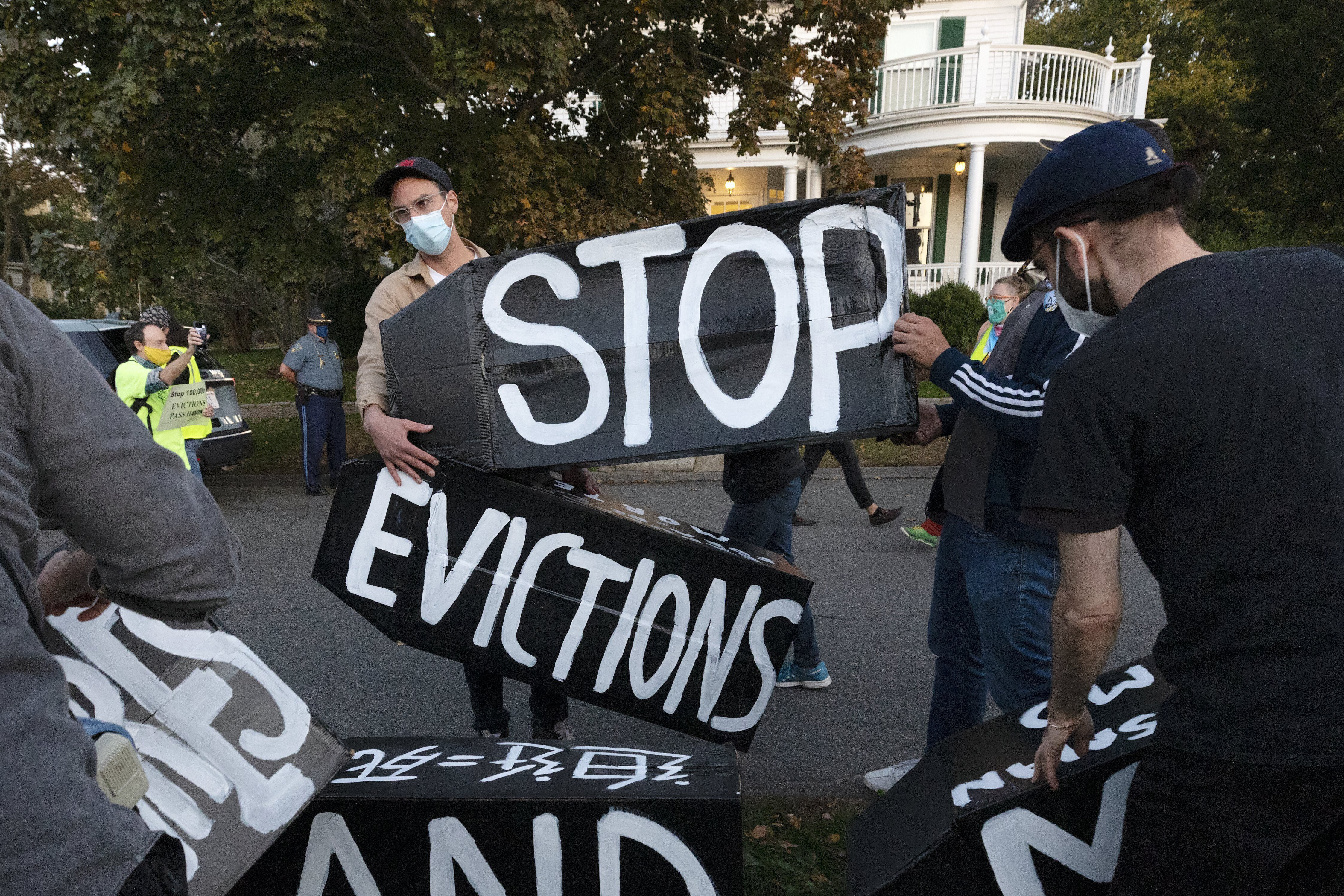 The eviction ban is ending, putting millions at risk of losing their homes

Ronald Leonard expects the sheriff to arrive at the door of his Daytona Beach, Florida, home any day after the federal ban on evictions expires on Saturday.

"I'm kind of a wreck," said Leonard, a retiree who lives on a fixed income. "If I end up on the street, I'll never survive."

Like many of the 11.4 million people currently behind on their rent, Leonard was able to remain in his home after his landlord filed for an eviction because of the federal eviction moratorium. Put in place by the Centers for Disease Control and Prevention last September to stop the spread of coronavirus, the order banned the eviction of renters for nonpayment of rent.

The CDC moratorium -- controversial and confusing from the start, and continually up against a moving expiration deadline -- was always a "Band-Aid on a wound that needed to be healed," said David Dworkin, president and CEO of the National Housing Conference.

The White House announced Thursday that it would not ask the CDC to again extend the protection, which expires on July 31, and called on Congress to take action. The Biden administration would have liked to extend it (it has been extended four times already) given the rise in the spread of Covid cases due to the Delta variant, but White House Press Secretary Jen Psaki cited the Supreme Court's ruling that, "clear and specific congressional authorization" -- new legislation -- would be needed for the CDC to extend the moratorium past its current deadline.

The House Rules Committee met on Friday to consider a bill to extend the federal eviction moratorium through December. But there isn't wide bipartisan support and it faces an uncertain future in the Senate.

The Biden administration also asked government agencies to extend their respective bans on evictions, also set to expire July 31. On Friday agencies including the US Department of Housing and Urban Development and the Federal Housing Finance Agency extended their more limited eviction protections, banning the eviction of those living in federally-insured, single-family foreclosed properties through September.

The CDC eviction moratorium and other protections have prevented an estimated 2.2 million eviction filings since March 2020, according to Peter Hepburn, a research fellow at the Eviction Lab and assistant professor of sociology at Rutgers University-Newark.

"These moratoria and protections, they haven't been perfect, but they've undeniably had a massive effect in preventing eviction filings," Hepburn said.

This comes as an unprecedented amount of federal rental relief -- $46 billion -- works its way through states, cities and local distribution points to the landlords and tenants who need it. The aid is the last lifeline that many renters can grab on to. But for many, it won't come in time.

Leonard, 68, rented his one-bedroom apartment from Tzadik Park, at the end of March 2020, just as the pandemic was spreading across the country. It was to be a fresh start for him after a living situation with family members deteriorated. He planned to stay there for a year while he found a more permanent income-based retirement home.

The former heavy equipment operator lives on $1,159 in monthly Social Security income. With a monthly rent of $819, including utilities, housing costs took up 75% of his income. But he could pay it, even as he struggled to furnish his empty apartment with basics. After July, when his doctor told him to stay in the house for protection from the virus, his expenses went up. He had to pay more for necessities and to have them delivered and he fell behind on rent.

When his rent was not paid in March 2021, along with $1,433 in back rent after several months of partial payments and hundreds more in late fees for not paying in full, his landlord filed for eviction.

Leonard is now $5,688 behind on rent, according to Christina Alletto, chief people officer at Tzadik Properties, which owns and manages Tzadik Park and apartment buildings in more than six states.

He found some security by invoking the CDC protection and applied for rental assistance. But his landlord would not accept the funds, he said.

In an email to CNN Business, Alletto said the company worked with him, providing the necessary documentation to apply for the rent relief, but the assistance he was applying for covered just one month's rent, not the full balance.

"Mr. Leonard stated in his letter to [apply for the] assistance that he bought new furniture with his stimulus check instead of paying rent, so they denied him further assistance," Alletto said, referring to the distributor of rental assistance.

Leonard says he had been sleeping on the floor for many months after he moved into the apartment because he hadn't been able to buy a mattress. He said he spent $69 on an air mattress.

Alletto said Tzadik continues to accept rent relief funds and is willing to work with struggling tenants. "Eviction is always a last resort after all other avenues have been explored with each individual resident," she said in the email.

But Leonard, who until now had been protected by the CDC's eviction ban, is running out of avenues to explore. His last-ditch effort to remain in his home is a letter to the judge in the eviction case explaining that he now has an application pending for 12 months of rent relief and expects to receive it, but does not think it will arrive before the eviction ban expires.

With medical problems and nowhere to go but "out on the street," he asked for more time in his handwritten letter. "All the rent will be paid but I don't know if it will be paid by the 31st of July....Please help me so I don't lose everything I own."

Millions at risk of eviction

There are millions of renters like Leonard at risk of eviction as the clock ticks down on the precarious protection. More than 3 million people said they were likely to be evicted "within the next two months," according to a Census survey from early July and nearly 5 million renters said they won't be able to pay August rent, according to the same survey.

Unable to extend the protection, the Biden administration has shifted its focus to accelerating rent relief distribution, streamlining applications and encouraging communities to create off-ramps so that millions of people don't fall off of an eviction cliff.

"We've known for nearly a year that the eviction moratorium would eventually come to an end," said Dworkin. "In December, Congress appropriated $25 billion to assist renters. We have had seven months to spend that money. There is no excuse that it is not in the hands of those who need it the most."

While some states and localities are doing better than others in getting the money out, only a fraction of the full $46 billion committed to rent relief -- including money from the December stimulus and the American Rescue Plan -- has made its way to renters and landlords.

"We are seeing the leading edge of the eviction crisis," said Dworkin. "It will be concentrated in states that have the heaviest impact and least tenant protections."

States where residents have the greatest risk of eviction include South Carolina, Mississippi, Georgia, Alabama and New Jersey, according to an Eviction Risk Insights report from UrbanFootprint, an urban planning data company. Its research also shows that Black renters are at more than double the risk of eviction compared to White renters, with about 25% of the at-risk population Black and 11% White.

Areas where people are most likely to be evicted are also areas more likely to have lower vaccination rates, according to research from the Eviction Lab.

"Given low vaccination rates in areas at highest risk of eviction and the rapid spread of the Delta variant of Covid-19, the public health case for an eviction moratorium is every bit as strong today as it was when the CDC originally instituted the policy," said Hepburn.

Valeria Allieti, a single mother who lives in Las Vegas, found her income upended when the pandemic kept her from cleaning houses.

She fell behind on the $1,270 a month rent she pays for the four-bedroom house she shares with her three sons. But she found protection under the eviction moratorium.

Allieti said she was reluctant to apply for rent relief -- accustomed as she was to being a single mom who needs to fix the problem herself.

"I don't feel I'm powerful because of the moratorium," she said through a translator. "I feel like a bad person. I have always been able to do it by myself."

But she now owes about $6,000 in back rent and sees applying for assistance as her best protection against eviction after the CDC moratorium expires.

Nevada has extended its eviction protection to those who are in the process of applying for rental assistance. The state has also passed a law to seal eviction records from the pandemic.

For Allieti, that means waiting as patiently as she can for the rent relief to arrive so she can pay what she owes and stay in her home.

"Right now I feel that I can't focus on my day-to-day," Allieti said. "I feel like I'm lost in the clouds. I'm worried about the prospect of losing our home, of the uncertainty about what could happen."

If you are looking for emergency rental assistance, there is a searchable list of available programs at the US Treasury and also lists managed by the National Low Income Housing Coalition and the National Housing Conference.

Hi: 79° Lo: 47°
Feels Like: 63°
More Weather
We had beautiful weather around northern California on Friday with sunshine and more warmth. Saturday will also be fantastic, so get out and enjoy it! A welcome change to our very dry weather pattern is coming soon.