Washington's agony is a win for autocrats and strongmen 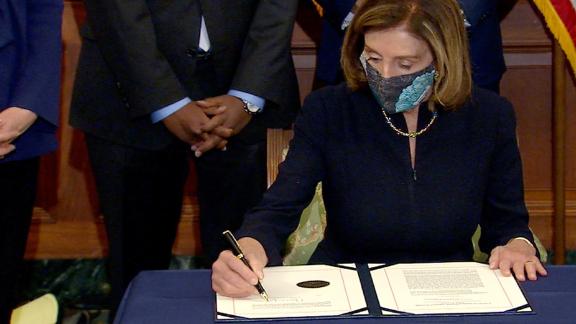 House Speaker Nancy Pelosi speaks for the first time following the historic House vote to impeach President Donald Trump for the second time, and signs the article of "incitement of insurrection."

Just 10 Republicans voted not to defend the indefensible.

Donald Trump has become the first and only President to be impeached twice, but most of his enabling party refused to make him pay for inciting violent insurrection. The few GOP House members who did vote to impeach braved personal abuse and attacks from colleagues, and they risk losing top party posts and stirring primary campaigns the next time they seek reelection.

The House debate before Wednesday's vote was a festival of hypocrisy, false moral equivalence and open lying as Trump's supporters denied reality in his defense. Some who had spent months pretending that Joe Biden hadn't won a free and fair election accused Democrats of fracturing national unity. Others warned that impeachment could spark violence, effectively validating the intimidation tactics of last week's mob.

Several Republicans allowed that Trump was at fault but argued the impeachment was too rushed on principle; more painted the process as the act of left-wing Trump-haters desperate to "cancel" him in a fit of political corrrectness.

Now Trump's fate is in the hands of the Senate — and more directly in those of another longtime enabler, Mitch McConnell. The Republican majority leader has finally broken with Trump by signaling he might vote to convict in an eventual Senate trial. If he does, other Republicans might join him to construct the two-thirds majority needed to convict. By then, Trump would be an ex-president -- but he could be barred from running for office ever again.

It's a long shot. But Wednesday's unique second impeachment vote already ensures that for as long as the American republic survives, Trump's name will be accompanied by a historic stain.

'Clueless what any of this means internationally or historically'

While the impeachment vote was going on, one senior Trump adviser told CNN's Jim Acosta that the outgoing President had yet to grasp the magnitude of the damage being done to his standing in American history and the nation's place on the world stage. The President is "clueless what any of this means internationally or historically," the adviser said. But he does worry about the potential effect on his business and "long-term brand."

According to a US intelligence community report, Russia's chief goal in interfering in the 2016 election in support of Trump against Democrat Hillary Clinton was to "undermine public faith in the US democratic process." Four years on, there have been two impeachments and an insurrection against the US legislature. Millions believe Trump's lies that he was illegally ejected from power, and doubt Biden's legitimacy.

Conspiracy theorists have seats in Congress. There are serious questions about whether one of the country's great political parties is now anti-democratic. The Covid-19 pandemic exposed weaknesses in a federal system that grants vast power to the states. And America's self-appointed role as an exceptional nation and beacon of democracy is in the gutter.

Most of the disorienting events of the last few years can be blamed directly on Trump and his particular skill at tearing at the social, racial and political divides that are just below the nation's surface. So the ex-KGB man in the Kremlin hardly deserves all the credit. But Russia, China and other autocratic nations are gaining much from Washington's agony. They're already using it to promote their own closed and totalitarian societies as models of comparative order and efficiency -- and to beat back brave local voices calling for democracy and human rights.

In an effective declaration of victory for Russia's espionage offensive against the US more than four years ago, Vyacheslav Volodin, the speaker of the lower house of the Russian Parliament, slid home the knife. "Following the events that unfolded after the presidential elections, it is meaningless to refer to America as the example of democracy," he said.

"We are on the verge of reevaluating the standards that are being promoted by the United States of America, that is exporting its vision of democracy and political systems around the world. Those in our country who love to cite their example as leading will also have to reconsider their views."

'You have seen what rioting is in Washington'

On the eve of Uganda's elections, longtime President Yoweri Museveni told CNN's Christiane Amanpour that he had every right to a sixth term -- and that protesters supporting rival candidate Bobi Wine were equivalent to the anti-democratic rioters seen in Washington last week.

Hi: 75° Lo: 47°
Feels Like: 54°
More Weather
Get out and enjoy this beautiful weather tonight! If you do head out and plan to stay out late, probably bring an extra later to throw on for when the sun sets as temperatures will be cooling off into the low to mid 60s for the valley by midnight and low to mid 40s by tomorrow morning.

Oroville man sentenced to 24 years for molestation of three children

La Nina just formed in the Pacific. Here's what it is