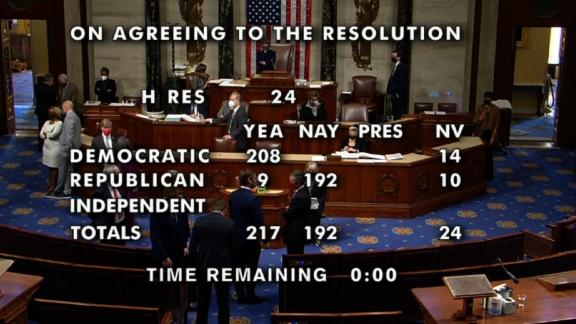 The House of Representatives reaches the 217-vote threshold, meaning enough votes have been cast to make President Donald Trump the only President of the United States to be impeached for the second time.

There was a rare moment of bipartisan agreement on Wednesday's impeachment vote condemning the violence surrounding the domestic terrorist attack on our Capitol. But Republicans and Democrats didn't do enough to focus on the months that led up to the coup attempt and why it happened. They focused on blaming President Donald Trump and the appropriate way to hold him alone accountable.

Ten House Republicans voted to impeach the President, acknowledging his role in inciting violence. But many, citing the President's speech during his "Save America Rally" moments before the riot began, claimed there was no evidence of incitement and that the President was just doing his patriotic duty by encouraging his supporters to use their voices. And, as they argued against impeachment, they disingenuously claimed that it was in the interest of healing the country's divide.

But lost in the debate was the root cause -- the big lie and who was telling it -- that set off the chain of events leading to the ransacking of the Capitol and the death of five Americans: The baseless claim that Trump had the election stolen from him by a grand conspiracy led by everyone from the Democrats, George Soros and the late Venezuelan President Hugo Chávez, remains the primary source of domestic discord and potential future violence and political chaos.

This is what should have taken center stage during the hearing. While Democrats were rightly enraged by the actions of the President at the rally just before the march on the Capitol, each speaker should have spent more of their limited time at the podium to remind their colleagues and the American public of the lie that sparked this fire.

Republicans voting against impeachment, not surprisingly, were not anxious to probe the fundamental reason of the insurrection.

While focusing on process and what was in the best interests of the country, they chose to ignore the claims made about the legitimacy of the election. That's likely because they were part of the chorus spreading the disinformation. Remember on the day of the coup attempt, 147 Republican House members voted to block the vote of the Electoral College, in an attempt to overturn the election. A small number of Senators joined this seditious effort by forcing a vote on these outrageous claims.

To this day, the vast majority of elected Republicans have not acknowledged the legitimacy of President-elect Joe Biden's victory.

Not surprisingly, the President continued with the big lie at the heart of the whole problem. In his first video reaction to the rioting, he emphasized the election was stolen from him, granting his supporters a feeling of legitimacy in their efforts to try to stop Congress by any means necessary. In repeated comments and tweets, the President then gave lip service to opposing violence but never backed down from the lie of a stolen election.

And if you think he might accept reality for the good of the country, you have not been paying attention. Even Thursday morning, his confidant, Peter Navarro, tried to justify the actions of Trump's supporters while still claiming that the election was not legitimate. He told Fox Business -- no surprise there -- that the 74 million people who voted for Trump are rightly "pissed off" because their voice was silenced on Election Day. He knows that's not true, as does the President and every Republican and conservative member of the media.

Going forward, everyone in Congress needs to be accountable for the big lie.

Democrats need to do this by focusing on the legitimacy of the election if they expect to push through Biden's agenda and avoid an epidemic of domestic terror around the country.

Accountability for the Republicans will be them understanding that they can't have it both ways: calling for unity while still maintaining the election was stolen. Until the President and the Republicans are forced to reckon with that big lie, there is very little chance that our politics can or will return to the pre-Trump era.

It is not an understatement to say our democracy rests on this. Whether Trump is convicted in the Senate is also an important symbol of accountability. And that goes for holding all of the elected officials like Senators Ted Cruz of Texas and Josh Hawley of Missouri, and Alabama Rep. Mo Brooks, accountable for their part in trying to undermine what has been proven to be a fair election. Failure to do so might lead to a repeat of the level of distrust in America's free and fair elections that led us to witness domestic terrorism on the Capitol and the first time a President has been impeached twice.

Hi: 58° Lo: 54°
Feels Like: 57°
More Weather
A significant weather system will impact our area beginning late tonight, lasting through the day on Monday. This includes a large amount of snow for the mountains, with rain and wind for the valley and foothills. A steady rain will begin to move into our area around 1am Sunday.

Highway 70 will remain closed due to mudslides and flooding