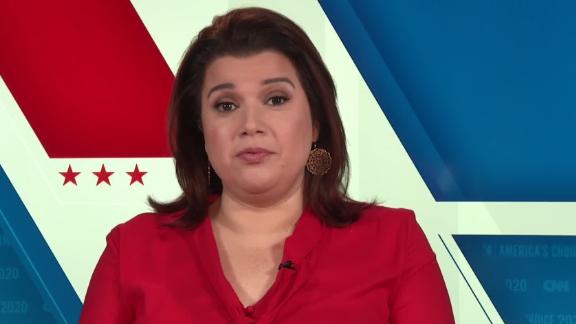 Ana Navarro says to Don Lemon that the Republican narrative in Miami-Dade County, Florida, that voting Democrat was voting for a socialist or communist worked on voters there.

There is a reason CNN has been warning to expect "Election Week" rather than "Election Night."

America is living it right now. And that's why we all need to stay calm and count every vote.

But the fundamental facts of the 2020 campaign remain in place. This is a Coronavirus Election -- and that means states are still processing an unprecedented number of mail-in ballots.

The 2020 presidential race is far from over. Either Biden or Trump could still win -- though Democrats have reason to believe that the outstanding mail-in ballots in major population centers would disproportionately favor their candidate. Republicans have reason to feel confident because they upended the polls and expectations, making inroads to the Hispanic population in particular -- and they appear to have stopped momentum for a Democratic Senate pick-up spree, despite some Democratic gains. But all of this is hypothetical until all the ballots cast are counted.

Joe Biden is leading in the popular vote, as expected, and as of 8:30 a.m. on November 4 there are nine states which have not been called because they are still counting votes -- From Alaska to Nevada and Arizona in the West to Wisconsin and Michigan in the Upper Midwest, to East Coast states from Georgia to North Carolina to Pennsylvania and Maine.

Not all these states will break one way, but in many of them, the bulk of the outstanding votes are mail-in ballots from major population centers -- big cities, small metros and suburbs -- where Democrats are expected to have an edge. In general, the mail-in votes cast have shown a decided tilt toward Democrats.

This is not unexpected, as CNN's Marshall Cohen explained in a pre-election article, titled "How to spot a blue or red 'mirage' in early election results." It may prove to be a variation on the theme we've seen in recent years, known as the "Blue Shift," when absentee ballots break toward the Democrats, as we saw in the 2018 midterms (a phenomenon that CNN's Harry Enten chronicled almost a month after the polls closed in that election). The morning after the midterms, early results showed Democrats picking up 26 congressional seats. When all the votes were counted, they gained 40 seats.

But Democrats aren't guaranteed a win in situations like this. In 2018, two Florida statewide races were too close to call -- prompting Trump to tweet: "An honest vote count is no longer possible-ballots massively infected. Must go with Election Night!" Republicans won those seats when all the outstanding ballots were counted.

Now, President Trump is reverting to his autocratic instincts, falsely declaring, "Frankly, we did win this election" and stating that he wanted to go to the Supreme Court with his insistence that "we want all voting to stop."

Don't get numb to how dangerous, dictatorial and fundamentally unlawful Trump's demand is. Even Trump ally Chris Christie condemned the comments, saying, "There's just no basis to make that argument tonight. There just isn't. All these votes have to be counted that are in now."

Thankfully, we are still a nation of laws, though Team Trump will, as they have indicated for weeks, challenge the outstanding ballots in court and claim that the full counting of votes is evidence of Democrats trying to "manipulate the results" and "steal the election" -- as they already did in a post-election tweet.

That is the opposite of true -- any attempt to stop the full and fair counting of ballots would be more credibly characterized as an attempt to "steal" the election. Counting all the ballots is not fraud. Outstanding questions remain about why the US Postal Service, run by a Trump mega-donor, defied a court order to account for 300,000 missing ballots, amid accusations of a slowdown in delivery.

That's why we are still in the middle of election week in an instant gratification society that is unaccustomed to waiting for the process to work. The heightened emotions are understandable -- there is a lot at stake -- and many Democrats were expecting a battleground state blowout that decidedly did not materialize. We may have the third presidential election this century where the winner of the popular vote does not win the electoral college, benefiting the Republican, which would be lawful but deeply destabilizing. We may see a decisive though narrower than expected Democratic win in both the popular and electoral vote.

Regardless, the world is watching. The strength of our democracy hangs in the balance. And the rule of law demands that we count every eligible vote cast.

Hi: 93° Lo: 51°
Feels Like: 66°
More Weather
Sunday was a bright and toasty day for northern California, with the warmest highs we've experienced since October 2020, with valley highs in the upper 80s and 90s. Monday will be slightly cooler.

Three people are dead amid an active shooter incident in Austin, Texas

A beloved firefighting leader from Tehama County has ended his watch