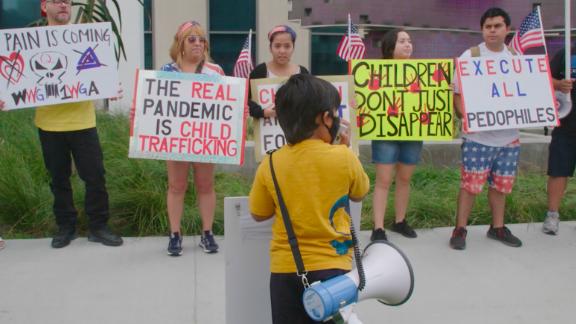 You might see people sharing the hashtag #SavetheChildren on social media. But much of this online activity has nothing to do with the respected and real Save the Children charity. Its name has been hijacked by followers of the QAnon conspiracy theory.

One, in Los Angeles, was a march through Hollywood that portrayed itself as an anti-pedophilia protest. Its organizers were careful not to explicitly embrace the QAnon conspiracy theory even as they implicitly signaled they support it and repeated its disinformation — much like what President Donald Trump did during an NBC town hall last week.

The other event, "Q Con Live," took place in a conference room at a resort in Scottsdale, Arizona. It was a meeting of some of QAnon's most passionate peddlers — but it could have easily been mistaken for a grassroots meeting to help re-elect the President.

What both showed is that for many of its supporters QAnon is not just a set of conspiracy theories. For them, it's a way to distract themselves from the failures of a President they see as the hero of a fight against an all-encompassing villainy, to elevate themselves by casting his critics and political opponents as those villains, and to not have to pay attention to all of the US' very real problems, like Covid-19 and systemic racism.

A march in Hollywood

"Pedophiles, you are on notice! - Q" one person's sign at the event in Hollywood said. Along with other material, including a QAnon symbol, the sign featured a picture of Trump heroically pointing, with the words "And I mean you Hollywood" added underneath. And then there was a hashtag: #SaveTheChildren.

Save The Children is a respected humanitarian organization that has been around for more than 100 years.

You might have seen over the past few months friends or family on social media sharing posts with the hashtags#SaveTheChildren or #SaveOurChildren. If you have, it's possible your loved ones have unwittingly shared QAnon disinformation.

QAnon followers have hijacked and bastardized the name "Save The Children" as a way to spread baseless conspiracy theories about prominent Democrats, including former Vice President Joe Biden.

Children need to be "saved," Qanon followers believe, from a cabal of evil Democrats. It is essentially the same conspiracy theory that was pushed as part of "Pizzagate" in 2016 which falsely alleged a Washington DC pizza shop was at the center of a child sex trafficking ring.

Edgar Maddison Welch was sentenced to four years in prison in 2017 after he showed up to the pizzeria and fired three shots with an AR-15 rifle. He claimed he was attempting to find and rescue child sex slaves that he believed were being held at the restaurant.

After Welch found no evidence of child sex-trafficking at the restaurant, he surrendered.

The "Save The Children" charity has nothing to do with this. It has publicly sought to distance itself from all of it. Other child protection organizations have said these conspiracy theories are creating dangerous distractions from the real issue of child exploitation.

One hundred or so people gathered on Sunset Boulevard in Hollywood two Saturdays ago chanting "Save Our Children."

Most people I spoke to there were ardent supporters of President Trump. Many carried pro-Trump signs and some wore Make America Great Again hats. When I told attendees I worked for CNN, their response often included some variation on the Trump attack mantra "fake news." Indeed, CNN's bureau in Los Angeles was a major stop on the march. The media writ large is a frequent target of these groups and their rallies because they think — falsely — that it is covering up for the people they have baselessly accused.

Outside CNN, I spoke to the organizer of the event. An aspiring rapper who appears to have begun posting on Instagram about alleged crimes against children earlier this year, he told me all he was interested in was helping save kids and that he did not follow QAnon — despite his having shared a post specifically mentioning QAnon on his Instagram account the day before we met.

Several marchers asked me a very good question: "What's wrong with wanting to save children?"

Of course, the answer is absolutely nothing. Child exploitation is real — though the reality of it is very different from the narrative promoted by QAnon — and abhorrent.

Also abhorrent, though, is how QAnon is exploiting people's genuine concerns about the issue to peddle a false narrative. And it's disturbing to watch as this conspiracy theory crowds out, for believers, the idea that anything else could possibly be as important as their fight against the non-existent cabal. People at the march told me that the "real" thing we should care about is fighting against the cabal — issues like racism and Covid-19 were, to them, either a distraction or at best a secondary concern.

A meeting in Arizona

At one point during Q Con Live on Saturday, a pair of presenters went on a long diatribe against people who wear masks to prevent the spread of Covid-19. It's a way to control people, and a symbol of submission, they argued.

It was an example of how the community of QAnon believers has come to embrace many other seemingly unrelated conspiracy theories, and of how willing those believers are to see everything as a sinister move by the "cabal" that must be fought against — inventing an imaginary threat and ignoring the very real virus that has already killed more than 200,000 people in the US.

It also showed just how strong the pull of groupthink can be among the conspiracy theorists. As the presenters spoke, I looked around the room and noted that — as ​was often the case on Saturday — I was one of the only people in a room of roughly 100 who was wearing a mask. I felt eyes on me, realizing the same thing I had. And, against my better judgment, I briefly pulled my mask down hoping it would stop the people on stage from singling me out.

The mask wasn't the only way I was different from most people at the conference. Journalists were allowed to attend, but not exactly encouraged — we could "purchase tickets and attend as individuals," the conference's website said, so long as we did not attempt to interview anyone.

Attendees might not have been wearing masks, but many were wearing both Trump and QAnon attire. Trump's importance to them, and to the whole conspiracy theory, was clear.

When someone brought up how Trump had two days earlier, at an NBC town hall, refused to disavow QAnon it was cheered.

Speakers at the event, some of the conspiracy theories' most ardent peddlers, referenced specific posts shared by the anonymous person or people behind QAnon as if they were scripture. Some told the audience that it was necessary to re-elect the President so the QAnon prediction of the arrest of people like Hillary Clinton could finally come to fruition.

QAnon had first falsely predicted Clinton's imminent arrest in 2017, and some speakers hinted at growing impatience and even perhaps skepticism about QAnon's claims and predictions.

Others, though, suggested it will all fall into place after Trump's reelection. This part was less surprising to hear. It will be very hard for people who've convinced themselves that this is the most important fight of anyone's life to realize it's all been a lie. And besides, many of the speakers had Q merchandise and books to sell.