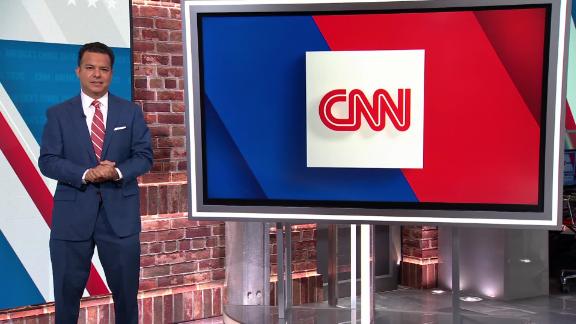 CNN's John Avlon breaks down President Donald Trump's comments during the first presidential debate where Trump again cast doubts on the legitimacy of the upcoming election.

Trump consistently steamrolled moderator Chris Wallace, a seasoned reporter many thought would have fared better. Trump's falsehoods and outright whoppers about his administration's inept handling of the Covid-19 pandemic, his xenophobic pillorying of China and prevarications about his personal income taxes set the stage for direct appeals to America's worst racial impulses.

Trump's championing of "law and order" eliminated the dog whistles of which he and his administration have long been fond with more naked appeals to White voters' racial fears. He has accused Biden of wanting to "destroy" the suburbs -- which in his apocalyptic imagination are lily white -- by not standing up to antifa and left-wing forces. Asked to publicly disavow white supremacist and military groups, Trump dodged the question. When pressed on a specific far-right group, he said he would tell them to "stand back and stand by." These comments implied they should be ready to pounce and wreak havoc if -- as Trump has repeatedly warned is possible (warnings he stunningly chose to reiterate from the debate stage) -- the election results don't favor him.

On Wednesday, Tim Scott, the lone Black Republican senator, called on President Trump to clarify his failure to condemn such groups and in doing so Inadvertently amplified their notoriety. "I think he should correct it, if he doesn't correct it, I guess he didn't misspeak." Scott also said he'd sent his comments to the White House chief of staff and said the response he got was "thank you." Whether Trump walks this back or not, the American people understand his message loud and clear.

Racial division lies at the beating heart of Trump's meteoric political rise and his efforts to hold onto power at the cost of our democracy. The President's public bragging about being supported by every major police union in America, perhaps because of and not despite his racist appeals, offers the biggest moral and political justification for reimagining public safety.

Now is the time for choosing sides.

With every utterance that comes out of his mouth Trump makes the case against his re-election clear. Not only is he unfit for the nation's highest office, he is plainly unworthy to represent the hopes, dreams, and aspirations that are tied to this republic.

Biden appeared steady for the most part, but still left plenty of opportunities to make a public case against Trump's racism behind. The case against Trump as an existential threat to American democracy has always been less rooted in allegations of financial malfeasance, ethical lapses and treasonous collusion with foreign powers (although he is indeed accused of and has denied all these things). Trump's most malevolent, and so far successful, gambit has been his blunt exploitation of the nation's original sin.

He's had lots of practice.

From charges that his father's real estate empire discriminated against Black tenants to Trump's well-documented call to bring back the death penalty in the Central Park Five jogger case and his failure to apologize after the defendants (Black and Puerto Rican teenagers) were exonerated, the President has pitted White Americans against people of color, specifically Black folk.

Trump's initially longshot presidential campaign in 2016 tapped into a thick undercurrent of White supremacist adulation in a way that echoed past segregationist campaigns run by South Carolina Dixiecrat Strom Thurmond in 1948 and Alabama's George Wallace in 1968, as well as the xenophobic America first campaigns of Pat Buchanan in 1992, 1996 and 2000 (and once he became the nominee and now as an incumbent, Trump has arguably surpassed them all in terms of the power and reach of his racism).

Trump's open verbal assault as a candidate on some of the Mexican immigrants who come to America as "rapists," and his decrying Haiti and nations in the developing world as "shithole countries," and publicly expressing admiration for Confederate generals such as Robert E. Lee while President of the United States have proven to be the tip of a noxious iceberg.

Trump's clash with Biden on Tuesday also resurrected the ghosts of the Democratic Party's racial past when he, correctly if without important historical context, charged the former vice president with authoring the 1994 crime bill that greatly accelerated the system of mass incarceration at the expense of Black dignity and citizenship. "You called them superpredators Joe," Trump said, reminding Biden and the nation of an ugly era of bipartisan agreement during the Reagan-Bush-Clinton years that located the origins of the nation's urban crisis in young Black bodies rather than systemic racism, unemployment, poverty, failing schools and segregation. (Though Biden did use the term "predators," the word "superpredator" was actually used by then-first lady Hillary Clinton to advocate for the bill -- a description of gangs and drug cartels that she later said she regretted).

This election represents a hinge moment in American history, a watershed opportunity for a reset that may allow us to begin the hard work of forging a new national democratic consensus out of the ashes of an era of plague, pandemic, and protest. Racial slavery remains America's original sin, a system that helped birth the world's greatest and richest democracy at the expense of the collective national soul.

Donald Trump's grotesque use of that painful history represents a contemporary reckoning for a debt that remains unpaid and long overdue. In rejecting his appeals to division, chaos, and racial mistrust we have the opportunity to reset the course of American history by creating a democracy expansive and big hearted enough to recognize itself in the beautiful diversity of its multiracial and multicultural citizens.

Hi: 79° Lo: 47°
Feels Like: 77°
More Weather
Sunny skies and warming temperatures are ahead through Saturday. Temperatures will cool down on Sunday, and the potential for rain and snow showers will return to northern California Sunday afternoon. We'll stay cool with more showers looking likely next week!