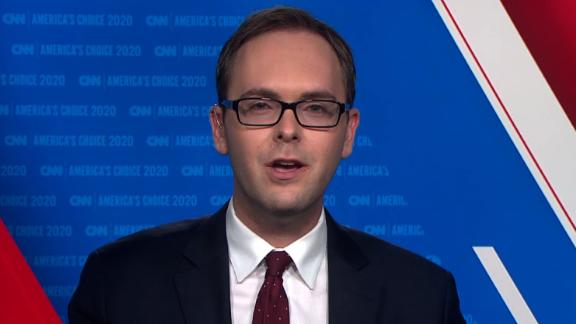 That was the worst debate in the history of presidential debating. And I'm including primary debates. Nothing else comes close.

Let's begin -- in order of most egregious to least.

I was, rightfully, it turned out, worried about the moderator. Unfortunately, Wallace decided to be invisible in his primary job here, as leader of a worthwhile debate. He was much stronger four years ago, when he was able to keep Trump within reason. Wallace's performance will be remembered for his not standing up to Trump and laying down the law early on, and then -- after it was too late -- shouting at the current President. Like a bad parent, he was absent when needed and overbearing when it was too late.

The notion of facilitating an "open discussion" played right into hands of the biggest liar and interrupter on stage. Debates with Trump simply aren't like anything else. The idea behind being "invisible" is that a moderator shouldn't get in the way of a good debate. Wallace, by losing control of the candidates, caused the chaos.

And when did Wallace think that allowing Trump to ask Biden questions, and then making Biden answer -- by failing to stop Trump and then at one point even prompting Biden to somehow answer Trump's question -- was a proper approach? It demonstrated an amazing lack of fairness, intended or not.

There are degrees of interruptions. Some are quick, short and annoying. Others are used as a defense against someone who just lied about you. Then there are long, off-topic, rambling and yell-at-your-television maddening interruptions. Trump's were this last kind. His torrent of bombastic babbling over both Biden and Wallace never let up. Plus, the number of falsehoods, questionable statements, claims without evidence and generally made-up junk simply put this President in a league of his own. (Here's an unlovely breakdown by CNN's fact-checkers.)

Biden needed to show more restraint in interrupting both Trump and Wallace. Sure, interrupting is required sometimes, like when a family member is attacked rhetorically. Unfortunately, Biden began the whole process of interrupting in this debate, drawing first blood. In doing so, and continuing throughout the debate, Biden might have turned off possible voters, who were left thinking that both candidates are insufferable.

Still and all, Biden wasn't nearly as hideous in the quantity of rage-inducing transgressions. He doesn't share equal blame. Look at the series of primaries he just finished or the one-on-one debate against Bernie Sanders. Compare those debates with last night's debate. If you see a difference, then the fault can't be with Biden.

And one more grade: an F, and F stands for Frank Fahrenkopf -- and the Commission on Presidential Debates, of which he is co-chair.

Part of what debate coaches do is to teach people how to judge and moderate debates. Fahrenkopf's instructions on this, elucidated in this interview with CNN's Brian Stelter, run counter to anything I've ever taught or heard. The directions to the moderators he described ("if one of these candidates says something on the stage Tuesday, it's the role of the other person in the debate to be the one to raise that") led to the mess -- which could have been easily predicted by anyone with a functioning TV or computer screen who has watched our President on it over the past 3½ years.

Wallace, Fahrenkopf pronounced, was just there as a "facilitator" meant to "get the candidates to debate, talk to each other about their positions." In the real world of debating, that's an open invitation to whoever wants to disrupt the debate the most. With his light touch on the rules rudder, Fahrenkopf (and his commission) are at least partly to blame for putting us through this rocky ride.

Could you understand what was going on? I doubt it. If you missed the debate and try to read the transcript, the only word you'll find consistently is "crosstalk."

I have no idea who won this debate. But I do know we're all worse off because of it. There are too many life-changing issues for Americans that ought to have been discussed (like, for example, a substantive exploration of the purported topics of this debate, which fell away or got systematically scrambled in the cacophony of chatter the President directed at his frustrated adversary).

It's a shame none of that conversation happened. The election of the United States president is serious business. It was not treated that way last night. There were no winners in that nonsense. Only losers. Us. We learned nothing new.

Finally, please don't throw the baby out with the bathwater. Debates have been around for thousands of years, and just because we have one candidate (Trump) who won't even come close to playing by the rules, that doesn't mean presidential debates aren't still valuable. Like most things, they have to survive this presidency.

Hi: 57° Lo: 47°
Feels Like: 45°
More Weather
After a few showers passed through portions of the valley, some fog is sticking around, but not for long.

Woman arrested for attempting to drown 4-year-old in ditch

BCSO: Suspect arrested for murder of 2 Alabama men, searching for another suspect