Why the Susan B. Anthony pardon is perfectly Trumpian 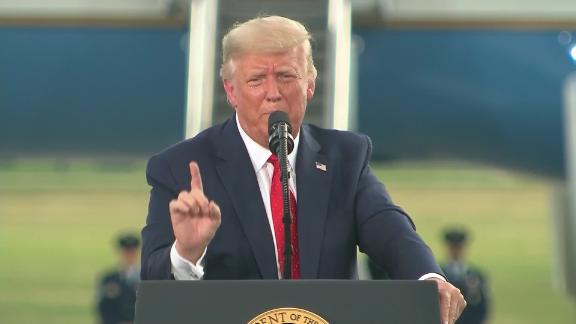 President Trump is trying to sow doubts about the validity of the election, saying the only way he is going to lose 'is if the election is rigged.' CNN's Erin Burnett fact checks his claim about mail-in ballots.

President Donald Trump is gunning for the women's vote, and so to great fanfare, he announced his plans to pardon one very prominent woman: Susan B. Anthony, who died in 1906.

Anthony was arrested for voting in Rochester, New York, in 1872, a time when it was illegal for women to do so. She was on the frontlines of the movement for women's suffrage, and by the time her fight was at least partly won and women secured voting rights in 1920, Anthony was long dead -- and even then, women of color continued to be excluded from the ballot box by widespread racist attacks on voting rights.

It was the conservatives of Anthony's time who fought back against women's rights, arguing that politics was harsh business too vulgar for women's participation, and that women, as the moral centers of the family, were essentially too good (and too intellectually lacking) to participate. Politics, their argument went, could even drive a wedge between husbands and wives -- better to have women serve as private keepers of the house and home and let men dominate public, political and economic life. Now, 100 years after Anthony's cause was attained and the 19th Amendment was ratified, it is this anti-feminist legacy that Trump and his Republican Party carry forward.

Trump ran against the first woman who had real potential to be the president of the United States, and ran a campaign that was shockingly and often crassly misogynistic. He has appointed fewer women to his cabinet than any president taking office this century. And he's not an outlier in his party. While Democrats ran a record number of women in the 2018 midterms and a record number won, the number of Republican women in both Congress and state legislatures actually went down. The number of GOP women in the House is the lowest it's been in 25 years.

Women make up nearly a quarter of House seats and close to 40% of House Democrats, but Republican women do far worse: Women make up less than 7% of Republicans in the House. And those anti-suffragists did get one thing right: Letting women vote would indeed allow them increased independence, including from their husbands. Today, the gender gap in voting is wider than ever. A majority of men vote for Republicans, and have since 1980. Most women vote for Democrats, including huge majorities of women of color.

Yet despite waning Republican support both to and from women, conservative groups have gone so far as to lay claim to Anthony's legacy -- which is perhaps one reason why Trump chose her for a pardon. Right-wing groups claim she was anti-abortion, without any substantial historical evidence, and in the face of ample proof that she was a radical progressive in her time and a vocal advocate for women's freedoms.

Today's GOP continues to oppose many of the feminist goals Anthony advocated for, and certainly the feminist movement she helped to found. But as always happens with social progress, conservatives claim ownership of the gains made by liberals -- even as they try to walk those gains back.

That's what's happening now. As Trump announces that he is pardoning a woman whose life's work was expanding voting rights and was arrested for voting, he's simultaneously trying to make it more difficult for Americans to carry out their fundamental civic duty of political participation. In the midst of a deadly pandemic when it's simply not safe to be in close proximity with other people indoors for extended periods of time, Trump has been hard at work undermining the US Postal Service -- the agency that will be in charge of ferrying millions of absentee and mail-in ballots to the vote counters.

Trump and his wife have requested mail-in ballots, despite claiming (without presenting evidence, even when told to do so in a court of law) that voter fraud is a rampant and serious problem with voting by mail. In fact, thanks in part to the Supreme Court's dismantling of the Voting Rights Act in 2013, the Republican Party is planning a widespread campaign of vote suppression and voter intimidation, or as they put it, rooting out fraud; to this end, they're "recruiting up to 50,000 volunteers in 15 key states to monitor polling places and challenge ballots and voters deemed suspicious," The New York Times reported in May.

And Trump has more or less admitted he is using his office to suppress the vote. The US Postal Service has requested emergency funding to keep them afloat -- like many businesses, they have been hit hard by the coronavirus, and an impending election with what is on track to be a record number of ballots cast by mail is going to require an injection of resources. Trump gets that: "They need that money in order to make the post office work, so it can take all of these millions and millions of ballots," he said. And that's also, he said, why he's refusing to fund the post office (though he did also say after outcry he'd sign a bill including it). He doesn't want them to be able to take all of these millions and millions of ballots.

One hundred years after women won the right to vote, American women are still underrepresented in politics; our basic rights are still up for debate; women who run for office are attacked as unfeminine harpies; and the President of the United States is a man who has boasted about sexual assault and denigrates women with misogynist slurs.

Now, while he's paying lip service to a fighter for women's suffrage, he's working to disenfranchise millions of American women. Trump praising a woman who fought for the right to vote while undermining the voting rights of millions of Americans is perfectly Trumpian: An empty spectacle notable only for its shameless hypocrisy.

Hi: 79° Lo: 54°
Feels Like: 75°
More Weather
Very strong winds and dry conditions are driving critical fire danger today. A Red Flag Warning for high fire danger, a Wind Advisory, and a Freeze Warning are all in effect for the start of your Thursday.

PG&E to shut off power to 37,000 customers Wednesday evening

One person in custody in relation to Red Bluff suspicious death

Car theft suspect arrested twice in one day in Chico

As Butte County moves into orange tier, some bars choose to stay closed