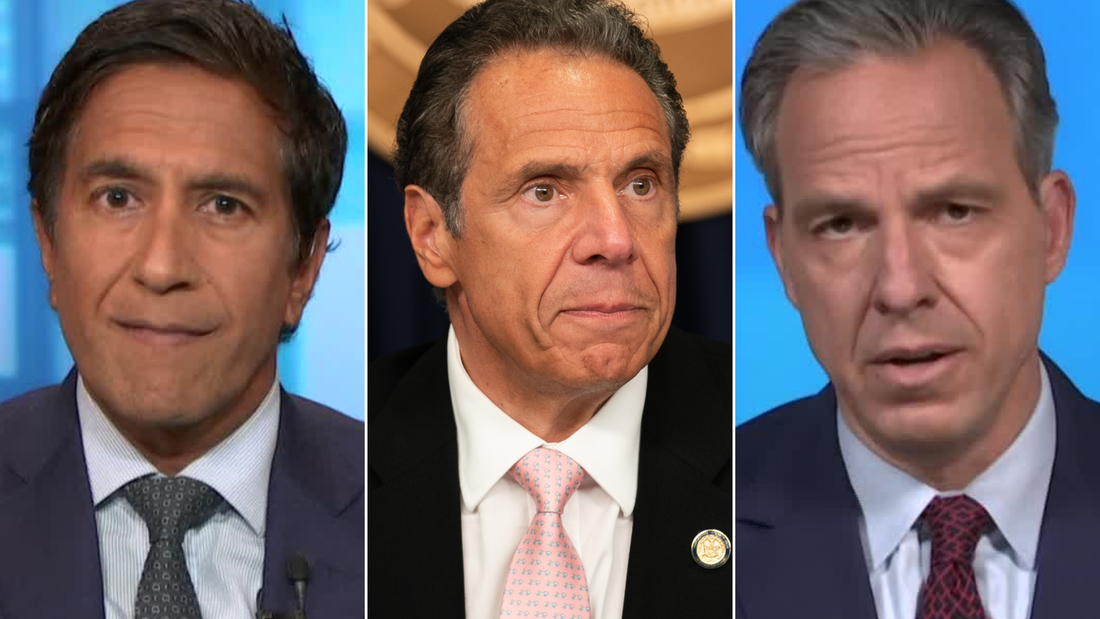 CNNs Jake Tapper and Dr. Sanjay Gupta discuss a poster being sold by Gov. Andrew Cuomo (D-NY) that seems to declare victory over Covid-19, despite many medical experts who say the coronavirus may come back.

Gov. Andrew Cuomo, a skilled political leader, made a rare misstep by releasing a strange, quirky poster depicting his personal thoughts about how New York fought through its worst and deadliest days (so far) of the Covid-19 crisis.

Fashioned after 19th-century political campaign art, the poster -- designed by Cuomo himself -- depicts a mountain and a cluttered, floating set of images: medical personnel and first responders, phrases uttered by the governor at his daily briefings ("Follow the Facts"), a political jab at President Donald Trump (pictured as sitting passively in the sky, floating on a crescent moon next to the phrase "It's Just the Flu," and a self-aggrandizing sketch of Cuomo delivering one of his briefings with the title, "New York State Leads Again."

The poster, hawked on the state's official website, is available for sale for $11.50 plus shipping; a disclaimer says the state won't profit from the sale. The cost to design it was reportedly paid by Cuomo's political campaign.

"I love history. I love poster art," Cuomo writes on the state website, describing the doodads on the poster as "little telltale signs that, to me, represent what was going on."

"I don't have anything nice to say about it, except that it's a helpful insight into a singularly incompetent and disorganized mind," wrote Madeleine Kearns of the National Review. "It must remain one of the weirdest political stunts to come out of a crisis."

Over at The New York Times, art critic Jason Farago panned the poster section by section. "It scores very high on curiosity, and rather lower on legibility," he noted. "You might think of those illustrated old-timey History of the World charts that once adorned schoolrooms, or perhaps an old promotion for a dinner-theater production of 'The Sound of Music.'"

Farago added the jab: "Even if your pride is as big as the Adirondack Mountains, you don't need to exult with kitsch like this."

Cuomo's whimsical gesture was in poor taste and poorly timed. New York suffered a staggering 32,000 coronavirus deaths in the span of just a few weeks, more than 10 times the number of lives lost on 9/11. In many cases, distancing requirements prevented people from visiting friends or beloved family members on their deathbeds or attending funeral services.

Tens of thousands of New Yorkers have yet to fully absorb and process the emotional and spiritual horrors that have befallen their families. They are in the throes of the worst suffering imaginable, none of which is even indirectly noted on Cuomo's poster.

And the disaster isn't over yet.

More than 1.3 million New Yorkers are unemployed, a rate of over 14%.

It remains unclear where, when and whether the state's 700 school districts will reopen in the fall.

An estimated 2 million people in New York City are going hungry every day, with a network of soup kitchens strained to the brink of collapse. Gun violence has erupted in the city's streets, with 18 people shot in a single day recently.

In short, New York is still a disaster zone. What we need in the middle of this continuing emergency are public servants who display energy, competence, compassion and determination.

Ironically, it was Cuomo himself, and his confident, just-the-facts daily briefings that helped soothe jagged nerves and steer New York through the worst of the crisis. That high standard of public leadership is what we have a right to expect now -- not cute quirkiness, chest-thumping or insider humor from a self-satisfied politician.

Hi: 65° Lo: 38°
Feels Like: 46°
More Weather
The fog tucked us in last night, leaving for some surreal driving conditions on the roads. We see the potential for a repeat situation this evening for the valley.