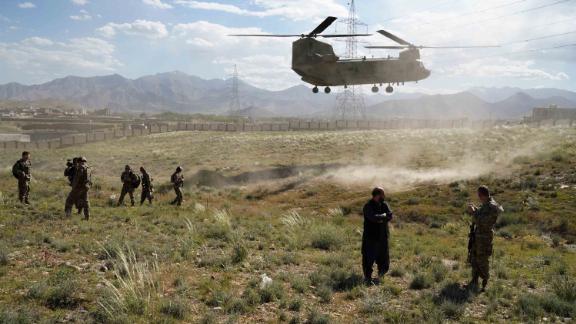 Russian bounties offered to Taliban militants in Afghanistan to kill US or UK troops there are believed to have resulted in the deaths of multiple US troops, the Washington Post reports, citing US intelligence gathered from military interrogations. A European intelligence official told CNN the incentives offered by the Russians had, in their assessment, led to Coalition casualties, which would be service members' deaths or injuries. The official did not specify as to the date of the casualties, their number or nationality, or whether these were fatalities or injuries. Washington Post reporter Ellen Nakashima shares more details.

As a game of who knew what when plays out with the administration -- this time about US intelligence that Russia was allegedly paying Taliban proxies to kill US and British troops in Afghanistan -- we can't lose sight of the big picture: Putin feels increasingly empowered under this President and that's a dangerous outlook for US national security.

It is important to understand whether President Donald Trump was briefed on this intel if it was, in fact, reliable intelligence. If he's lying in his denial about being briefed and he did know that our forces were at risk, Americans would have reason to assess that Russia paying for the murder of Americans isn't a redline for Trump.

The New York Times, which broke the story, reported Trump was briefed on the bounty information back in March.

Trump said that is not true, before tweeting on Sunday: "Intel just reported to me that they did not find this info credible, and therefore did not report it to me or @VP. Possibly another fabricated Russia Hoax, maybe by the Fake News @nytimesbooks, wanting to make Republicans look bad!!!"

There are in fact times when Presidents are not briefed on threat reporting, but that's normally because the intelligence isn't reliable if it is still being vetted and there isn't a lot of confidence in its veracity.

In this particular case, there are indicators that officials had at some degree of confidence in the intelligence. A US official with knowledge of the matter confirmed to CNN that some measures were taken to protect US troops in light of the intelligence. It is possible that these measures were taken as an added precaution while the intel was being vetted, but this is the kind of development you typically flag for a US President.

Plus, according to the Times' reporting, the intel was shared with the UK, implying a level of relative confidence in its veracity. It does not appear that reliability was a limiting factor here. Even if the intel was still being vetted, there were people who thought it was reliable enough to respond to in various ways. Based on my four years at the White House, that typically warrants at least a mention to the President.

He has had a closed door policy when it comes to intelligence on other threats to Americans -- like Covid-19 or North Korea. Former National Security Adviser John Bolton recently said in an ABC News interview that Trump received intelligence briefings relatively infrequently and that he rarely read much when he did. So it wouldn't be out of character for Trump to opt out of intelligence briefings that would have contained this recent threat reporting.

The only other explanation is that multiple members of Trump's handpicked team failed, on multiple occasions, to brief him on this intelligence or to make him aware that vetting of this threat reporting was underway. Any way you cut it, incompetence brings with it fatal consequences. Actions were not taken to punish Russia for allegedly targeting Americans.

This failure to hold Putin accountable unfortunately comes as no surprise. If the intelligence is correct, four years into Trump's Presidency, Putin feels omnipotent enough to try to kill Americans. Trump has inaccurately blamed former President Barack Obama for letting Russia invade Ukraine when the reality is that Trump created an environment in which he's not only letting Putin attack our democracy, he is potentially letting Putin attack US soldiers.

Trump's failure to personally hold Putin accountable for myriad previous illegal operations would give the Russian leader good reason to think that Trump's a pushover even when it comes to the physical well-being of American troops.

Trump has shown little reluctance about cajoling and rewarding despots who harm Americans. Just look at his praise for North Korean leader Kim Jong Un even after American Otto Warmbier died following being jailed by Pyongyang. Or Trump's decision to "stand with Saudi Arabia" after the Saudi Crown Prince was accused of ordering the murder of American resident Jamal Khashoggi.

When it comes to the Russian president, the administration not only failed to impose penalties on Putin -- Trump offered Putin prizes like inviting him to attend a G7 meeting and announcing a drawdown in US forces in Germany which undoubtedly pleases Putin.

The who-knew-what-when trail is important to follow, but we do have to remember that to date, Russia has not been punished. That means that there may be ongoing, live threat streams to our personnel wherever Russia can pay proxies to try to kill them.

If the allegations are true, the first order of business must be imposing costs on Russia so that they don't do this again. That will require the President absorbing the intelligence and using it (and not his insatiable desire to placate Putin) to drive real, informed policy decisions. It will concurrently require the President to coordinate with allies. A coordinated response to Putin will be more impactful.

Unfortunately, if past is prologue -- Trump has an allergy to exactly those two things: integrating intelligence and coordinating with allies.